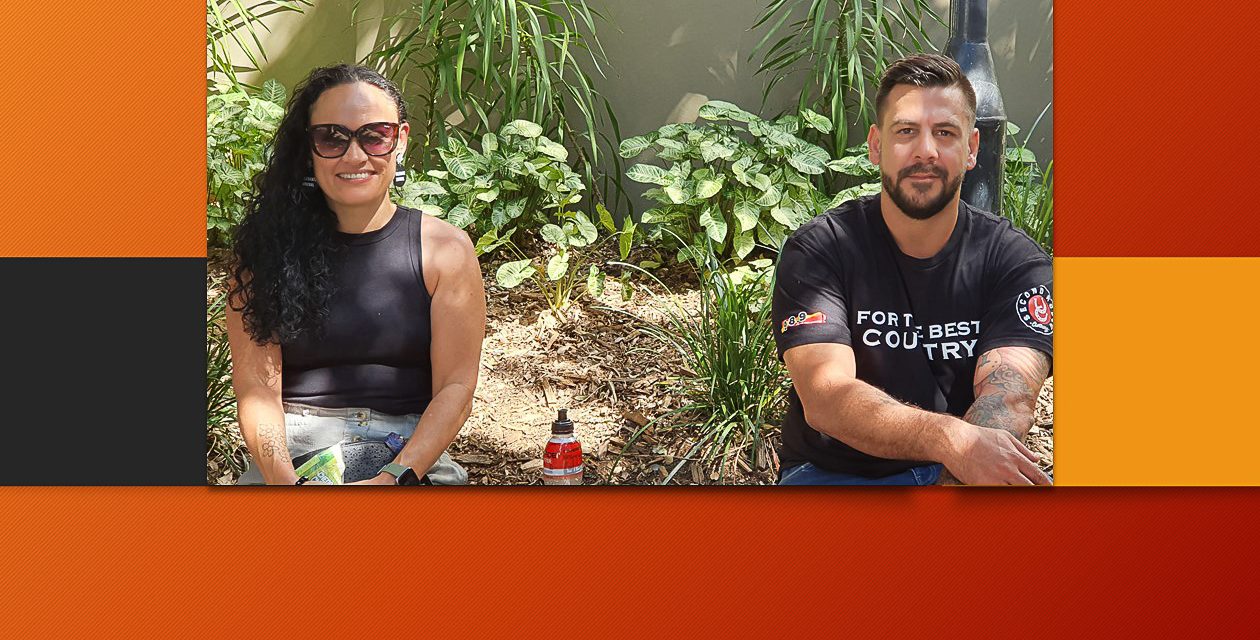 Dan Rennie, Manager at 98.9FM, said he approached Kylie Deen at WECH about the station using the kiosk.

“Knowing the history of Boundary Street and this space, it felt like it was right for us to come down here and be a part of what’s happening on the street. So, we reached out to West End Community House, and Kylie was straightaway up for it.”

“Number one, it is culturally appropriate as a First Nations radio station in West End to be down here on the street with the mob. And secondly, Kylie was also sort of keen to work together on ways that we could activate the space and make it work for not only us, but for other stakeholders in the community. So, I tip my hat to Kylie for her eagerness to have us.”

This isn’t the first time the radio station has worked out of the People’s Park Kiosk. Then known as  4AAA Murri Country, 98.8FM was broadcasting from the kiosk until 2000.  Now they are back.

“Being here in West End, it really made sense to have a presence here and to see a logo up there, and even when you walk into this space, you feel that energy. It’s a vibe, and I think you feel that particularly when you know the history of Boundary Street, Musgrave Park and the significant areas for Aboriginal and Torres Strait Islander people,” Dan said.

“Yes, there is quite a strong history. I think by bringing some life into it, bringing in some services. Bringing in 98.9, bringing in health care providers, it just brings life to the space. It’s exactly what it needs, and we don’t want to lose this space,” Kylie added.

Kylie said that during COVID everything was dead, so now is the time to bring the community together.

“So many people have been isolated and really stuck on the margins through this COVID business, so I think bringing everybody together is the right thing to do, and that’s what West End does.”

Kylie said they have set up meetings with stakeholders and traders and received a positive response.

“It’s something that they’ve wanted. They wanted to see 98.9 come back into the space and bring that cultural component back. There’s a lot of history to be shared, and there’s a nice partnership that can be formed from this, and it also brings business back into West End.”

Kylie said that WECH plans to be active in People’s Park at least four times a week.

“We are planning for mental health week – a week-long program of activities. We’re having poetry slams; we’re going to have the Whoopee Doo crew coming down here to perform and run songwriting workshops. And then on the Sunday the 18th of October, Kurilpa Futures will be having their first planting session along Russell Street. So, the community is invited to that.”

“We’re just letting it happen organically,” Dan said. “We don’t want to be encouraging big crowds, so we just want to grab the people that are around and who need it the most at this point.”

The radio station will broadcast its National talkback show, Let’s Talk from the kiosk, and the Indigenous music program, The Murri Hour as well as their Breakfast and Drive shows.

“So, we’re just chopping and changing and popping up, which has been really fun, sort of not knowing when we’re going to do it. It just organically happens. Once COVID restriction lift we’ll be really pumping this up. There’ll be live music, and there’ll be feeds for the mob, tea and coffees. All those little things that help the people that are out and about on the streets.”

“Obviously, we have COVID safe planning,” Dan said, “We are making sure people are socially distancing. Bringing people together but making sure that they’re doing the right thing”.

Perspex has been erected in the kiosk to keep workers and the community safe.

Dan said that the radio announcers and broadcasters would hang around after the show and interact with the people who might have questions.

“We’ve been speaking with historians lately about the significance of Boundary Street and what that means, not only for Black Fellas, but for the wider community who perhaps don’t know the real history of why there are Boundary streets, not only here in Brisbane but in most major cities.”[1]

And, having the radio broadcasting from the Park gives people a peek behind the curtain, Dan said.

“Some people think it’s a big extravagant production, but in reality, we can pop up anywhere at any time and do a radio show.”

As well as the grant which Kurilpa Futures is using to add some greening to Russell and Boundary Streets, West End Community Association (WECA) has received two grants: one via Federal Member for Griffith, Terri Butler; and the other via Brisbane City Council, for permanent artworks to enhance the Park.

“Our consultation was delayed due to COVID, but it has led to more one on one, and deeper conversations”, Seleanah More, WECA’s President said.

“The feedback from stakeholder consultation is that locals see the mural as an activity to engage and showcase local artists and the history of the park as a place for peace and Indigenous connection.”

“We are exploring options to use more community artists to brighten up the space, rather than a single artist within our grant budget.”

Ms More said that the selected experienced artists would collaborate with local artists groups that use the Park to determine the new art pieces.

“WECA believes that this inclusive process is aligned with the spirit of People’s Park and we are excited by the art this creates,” Ms More said.

In the meantime, check out the fabulous artwork Duane Doyle from the WECH Community Art Gang is doing on the Kiosk facade. 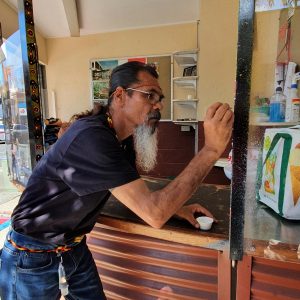 Kylie said that Community House has put out a call for community members to come forward with ideas and visions.

“This space is great. It’s absolutely beautiful. I think consultation with our community is so important. We would love to have some ideas from people. If somebody wants to do a meditation group, or other group, I’m happy to work alongside people and to hear the suggestions. I may be able to help them do a COVID Safety plan. I would really love this space to have more life in it.”

“I have a massive whiteboard, and I just want people to come through, bring your own whiteboard-marker, and tell me what you see for this space. What does the West End community mean to you? What does Peoples Park, and its history mean to you? I would love to see that” Kylie said.

[1] If you want to catch up on some of these history podcasts, head to https://989fm.com.au/category/listen/programs/ to hear about the history of West End, Musgrave Park, and South Brisbane.