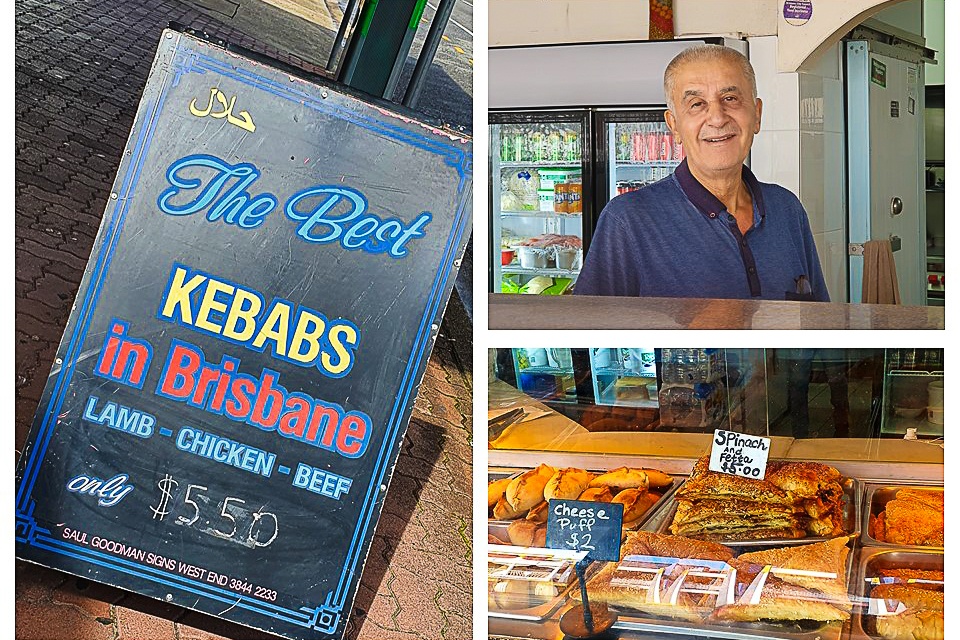 When did you last visit the King?

King Ahiram cafe has been selling signature Lebanese and Middle Eastern food for the past 45 years on the corner of Vulture and Boundary Streets, in the heart of West End, Brisbane.

People come to visit this place not only from Brisbane but from other places, they are drawn by the price and quality of food served up by the owner Walid Masri and his family.

“They come, people come from a long way away, sometimes from Sydney, Melbourne and Adelaide when they visit Brisbane,” Walid said.

“It’s a thrill,” he says, to serve these people who know the quality of his food and love the fact that he is still there after many years.

His regular customers are a cross-section of local workers and residents, tourists, students in West End or migrants who call West End their first home.

The current owner of over 25 years, was born in Tripoli in North Lebanon. Since coming to Australia and taking over from the previous owner Theresa, Walid has built a remarkable food establishment.

The whole family is involved: eight children and 14 grandchildren. It’s a remarkable multi-ethnic and multicultural mix. His children are married to Spanish, Australian, Salvadorian and Lebanese partners. Their future in Australia is founded on diversity.

The family knows no other way than hard work. King Ahiram’s is open seven days a week and 12 hours a day: the women and Walid work in the daytime, and the King’s boys work at night.

Over the years in the 70s and 80s, Boundary and Vulture Streets intersection had a certain notoriety and was considered dangerous at night. The café, situated just up from the intersection, was one of a few eateries that survived. It is one of the longest-running cafes of its type in Brisbane.

“We used to have people threaten us, the staff, with a view to robbing the place or pretending to carry a weapon in their pocket while they insisted on cash; we were okay handing over food but not cash,” Walid said.

It was also quite common in those days for local kids to congregate on Boundary Street on Friday and Saturday evenings. Some nights the café would still be open at midnight. In fact, at times, it was the only cafe open after 10pm in most of Brisbane.

“There was danger and altercations, but we had to take a chance, as we needed a steady income,” he said.

King Ahiram cafe has lived through all of this and stayed the test of time in the heart of West End.

Family works best because it can be called on in an instant.

Walid says business has been okay over the years, but recently with Covid-19, things have been quite difficult. Some of the people who eat at the cafe have left the area, particularly with the price of rent and the many houses for sale, but come back for the food.

The shop hasn’t changed much in all these years: it looks the same. The same delicious food is a mouth-wateringly display set out inside the two glass cabinets that have been there forever. 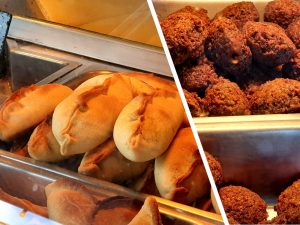 Walid says his top-selling item is the vegetarian falafel roll, with tasty large falafel pieces and hummus wrapped in pitta bread and salad that oozes goodness, variety and nutrition.

The rest of the cabinets are taken up by various Middle Eastern finger foods and delicious sweets that can be eaten sitting down or on the run. Popular foods are Spinach and Lentil pastries, Cheese triangles, Spinach rolls, Chicken and mushroom pastries, fried Eggplant and other notables.

The prices have hardly changed since the early days.

“It’s a remarkable challenge”, Walid says, “to keep the prices down and serve good quality food”.

At the moment, some days are profitable while other days are not.

Walid’s sons and daughters have grown up in the café: some of them were just babies when they first arrived at the front door.

He also has his always gracious wife Moulouk Masri who works with him in the café. She brings with her a wealth of knowledge of Middle Eastern food. 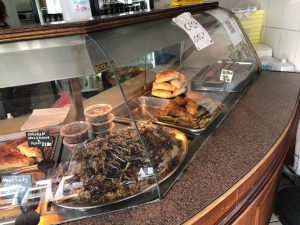 Safa, one of the daughters, works daily. She clearly enjoys it and is very comfortable in her role at the café.

“I now have a Diploma in beauty therapy and love to do it but need to help my father in the café,” Safa told me.

Safa works in the mornings, setting up for another 12 hours of production. Very few of the Middle Eastern delicacies are bought from outside.

“The majority of the food we sell is made in-house; it is mostly home-made.”

“I have recently purchased a falafel machine that produces large pieces of falafel much quicker than before,” Walid said.

He’s also developed a new recipe for the falafel pieces.

When asked what he thought of the current West End, Walid said that the suburb is changing: people were eating less in the suburb’s small cafes.

“Alcohol is a big attraction but not for me,” he said.

He says it could be the only combination in business that works. The children have now also learnt how to run a successful business.

Walid believes that running a successful café business is all about quality food and staying open for long hours, well into the night. Of course, dealing with your clients carefully is also critical.

Theresa, the previous owner of many years, was famously a generous, happy woman who supported socially disadvantaged people by feeding them and helping them by safekeeping their cash.

It was common in those days for local people to distrust banks, so they would withdraw all their pension cheque and carry all their cash around in their bags. Added to that, most lived in bedsits around the suburb where there was no real place to hide money. Theresa was one of the café owners who was used as their cashier, storing money collected out of the bank given to her for safekeeping. Frequently they would come by the café and request $10 or $20 from their cash until it all ran out. Then it became time for a small loan. She was a wonderful woman, generous, and incredibly honest.

The locals loved having this service, and other businesses did the same. 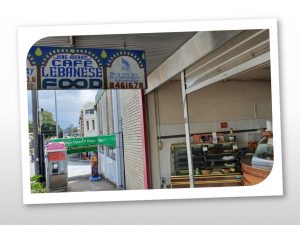 The last time Walid’s daughter Safa visited Tripoli in North Lebanon was in 2011. They all went with their father and mother to visit the relatives and they loved it. Walid and his wife wondered if they could stay in Tripoli but soon realised that it was more dangerous than the corner of Vulture and Boundary Street. They decided that frequent visits were a better idea.

I ask Safa about the best Lebanese Middle Eastern cafes in Brisbane. She says, “there are a few, but they’re all quite expensive. They pay big rent and have staff who are quite often not family members. We are lucky in that way; we have a large family.”

The business is getting busy as I leave. The family has 45 years of combined experience and ups and downs in the economy. In a few minutes looking back, I see five people standing at the glass counter waiting to be served. The King of the falafel and his family take up the reins for another night: there’s another 12 hours to go.