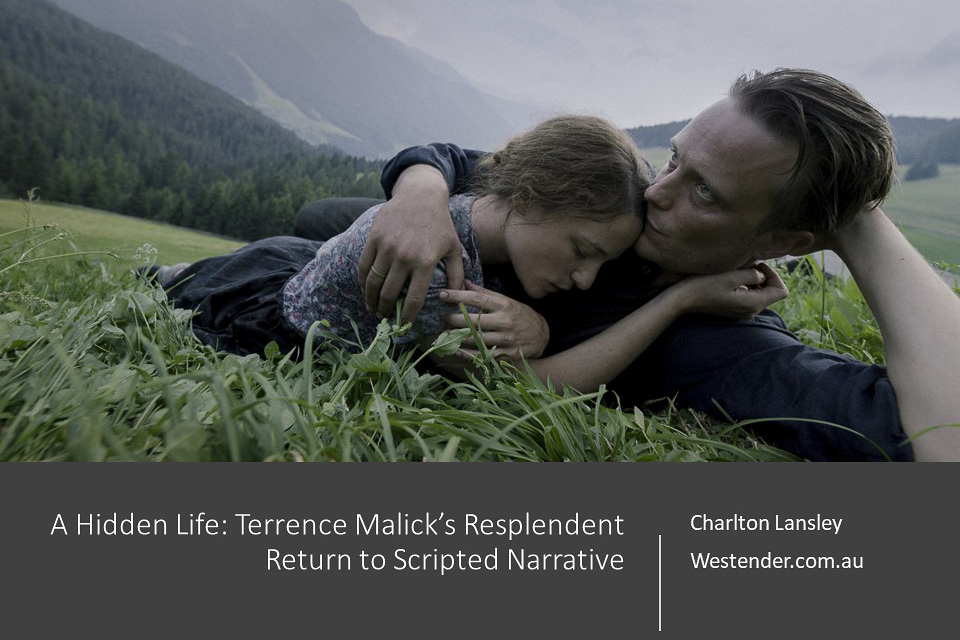 This story is not told in the film but comes from the real life of the film’s protagonist, Franz Jägerstätter. I loved it and wanted to share it with you:


In January 1938 Franz Jägerstätter dreamed he saw “a wonderful train” coming around a mountain. The gleaming engine and carriages seemed attractive to children who “flowed to this train and were not held back.” Then a voice said to him, “This train is going to hell.” He continued to think about it long afterward. The train, he realized, symbolized the glittering Nazi regime with all its spectacles and its associated organizations, Hitler Youth being one of the most important and spiritually corrupting.

A Hidden Life is a very Malickian film: a realistic, poetic and philosophical examination of morality that is told with such beautiful technique. It makes me excited to be able to share my thoughts with you, so let me give you a little context (and indulge a little).

Terrence Malick is well known for his poetic and intellectual approach to filmmaking, focussing on the human soul and its place in nature. He frequently employs lingering shots of nature that allow you to absorb and reflect on its power, even in such films as his war epic The Thin Red Line. In a Malick film, thoughtful voiceover monologues overcast scenes of profound human minutia, and a mixture of Steadicam and handheld cinematography captures the fragility and purity of humanity with a timeless compassion.

Of recent note, Malick’s focus has been directed toward an experimental method of filmmaking, heavily invested in improvised approaches to script and story, collaborating heavily with his actors, cinematographer (usually Oscar winner Emmanuel Lubezki), and crew. Though bold, these approaches often proved polarizing to audiences, provoking many to ask, “What’s the point?”.

Considering this history of his work, it was unsurprising that the announcement of A Hidden Life was seen largely as an exciting and more inclusive return to a more scripted and coherent storytelling structure.

All this to say, (as much as I admire his experimentation) this was very much my feeling going in, and I was excited to see whether his craft had developed, and how his trademark poetic approach would apply to the story of A Hidden Life.

This story, a true account of farmer and conscientious objector Franz Jägerstätter (August Diehl), could easily be delivered reductively and my concerns were that the film would end up becoming a rather contrived display of human courage in the face of what is wrong in the world (it is rather easy to romanticise the heroism and elevate the reality of the story when Nazis are involved after all), but this didn’t happen.

I saw this as a rather modest tale. It didn’t paint Franz’s story to be one of defying the odds, bravely fighting against the evil Nazis; but rather one of a simple man, his relationship with his wife, his family, his village, and his inner moral immovability. It’s not that Franz wanted to change the world, but rather that he couldn’t live any other way.

The film is not overly dramatic and instead focuses on Franz and his wife Fani’s (Valerie Pachner) relationship. Franz is a thoughtful man, a kind father and husband, and possesses a Socratic curiosity about his thoughts. Fani is equally mindful, her eyes and actions reveal a deep intelligence and determination to what is good. Together, they live well in a romanticised peasant way of life, and soon are forced to come to terms with a war their country didn’t ask for, and what this means for their family when Franz gets conscripted.

The film presents a philosophical investigation into man’s innate sense of morality and presents many different arguments to Franz and Fani as to why it would be morally permissible to fight for the Nazis. He seeks wisdom from the local priest who chastises him,

“Don’t you think you ought to think of the consequences of your actions for [your family]… your sacrifice will benefit no-one”.

In opposition, he then hears a sermon in the rather grand church that looms over their small village:

“No matter how hard the hammer hits, the anvil does not hit back. The anvil is stronger than the hammer”.

Yet after Franz tells the priest there that that he could never fight for Hitler’s fascist regime, the wizened response is:

“We have a duty to the fatherland, the church tells us all. Do you know the words of the apostle, that every man is subject to the power that’s placed over him?”

As the viewer we are taken on a beautiful, slow and thoughtful ride where we must consider the subtleties of each conversation and ask ourselves if this new argument is enough to sway Franz. Is it right to follow your moral convictions when your community tells you it is wrong? What then when your religion tells you it is wrong, or when it will put your family at risk of death, or when your voice of refusal will be lost to history anyway?

The story forms itself before us like a parable of Adam and Eve where they refuse to bite the apple yet the world keeps putting it back in their face with a new colour, a new texture, and tells them to bite.

Now to answer my earlier question: has Malick’s storytelling evolved from his improvisational works? Yes. There are still the classic stylistic elements: the Steadicam/ handheld observational cinematography seamlessly adopted by Jörg Widmer (previously a camera operator on The Tree of Life), a beautiful score (by James Newton Howard) that builds an emotional subtext, but it also seems like structurally he has integrated techniques developed from his recent experimental films seamlessly into this narrative piece.

There are clear dramatic scenes in the film (which normally would not be of note, but this is what audiences were craving from Malick that he previously wasn’t giving) but there are also montage-y, seemingly improvised, human moments scattered frequently throughout that give reality and depth to the characters. Often we will hear bits of meaningful dialogue or letters between Franz and Fani, and underneath will be 2-3 shot scenes strung together. Fog on the mountains, Franz and Fani laying together on the hillside with hands reaching into the sky, tense moments of heartbreak and light moments of play: all such moments are as present throughout the film as a heartbeat.

The structure is really quite complex with what must have been hundreds of these small scenes that aren’t really connected clearly to any particular moment in the plot, so I understand why the film took 3 years to edit.  It’s a masterful showing of directing performance too, August Diel and Valeri Pachner shine as the intelligent and emotionally connected Franz and Fani, but even the smallest characters have a subtlety to their eyes that betray a deep and considered inner life: each prisoner in Berlin, each guard, each peasant villager. You can easily forget that there is a script at all with such realism (and it must be said, the attention to production design and lighting helps too).

Another interesting technique was the use of foreign language. There are very select moments in the film where foreign language (usually German) is spoken with no subtitles on screen which carefully controls the (English-speaking) audience’s experience of the film, denying us information to either create mystery, detract importance or give privacy to a scene. It shows great delicacy.

All this being said, I think some audiences are always going to feel that this sort of film is quite pretentious. This comes through in the purity of Franz and Fani (it is hard to believe and relate to flawless characters) as well as every character’s way of speaking with the air of an old wise man, it can be a hard pill to swallow.

I wouldn’t say overall that the film is pretentious though, just smart. The poetic nature of the film’s visuals and dialogue while not entirely realistic does brings an elevated sense of emotion, intelligence and importance to the scenes, contributing to the holistic experience of the film.

I don’t think we would care so much about what is being said if it never made us feel anything. The dialogue goes hand in hand with nature as with other Malick films, it makes us breathe and soak in and feel a sort of higher power. For me, this power isn’t God or religion, but the inner untapped power of genuine human goodness. I think that if you surrender yourself to this film, you will come out a better person.

One criticism I have that I feel needs to be said is that the film doesn’t make us feel the intensity of its story as much as I think it could. In a way, I think Malick has been too modest and declined to let us soak in the power of his scenes, instead vying to cut away and let us think of the implications. If Malick wants us to care heavily, he requires us to bring a lot of ourselves to the film, rather than the film bringing an experience to us.

I’m of the opinion that stronger emotional connection brings a stronger intellectual engagement too, so I think this is counter intuitive for Malick if he wants us to engage in the greater ideas underpinning the film. That being said, there is a lot to emotionally engage with, but these are delicate, fleeting moments that make up another line in the stanza of the epic poem that is A Hidden Life. Moments like a young man about to be executed who is handed a clipboard and pen to write his last words. He says, “What do I write?”

A Hidden Life is a pure experience, a chance to reflect and breathe. There are moments when the plot seems to lack development, but I only found myself thinking this once in the nearly 3 hour film., As a WWII story without any combat, without frightening villains or moments of heroic triumph, it’s a counterpoint to the ham-fisted choices of Hacksaw Ridge. It’s not the journey of some idyllic saint that we could never live up to, but instead simply a man whose actions always seem within reach of us, as if they are something we could also do if we tried.

The meaning of the title is revealed at the last frame of the film to be the end quote from George Eliot’s Middlemarch,

“The growing good of the world is partly dependent on unhistoric acts; and that things are not so ill with you and me as they might have been, is half owing to the number who lived faithfully a hidden life, and rest in unvisited tombs.”

Franz and Fani never wanted to go down in history and this point is made repeatedly. It makes their actions matter so much more, they were just following what they thought was right. This is your chance to experience spiritual cinematic poetry in a way that only Malick can bring.

You can see A Hidden Life at Palace cinemas from January 30th and at Hoyts from Jan 31st.