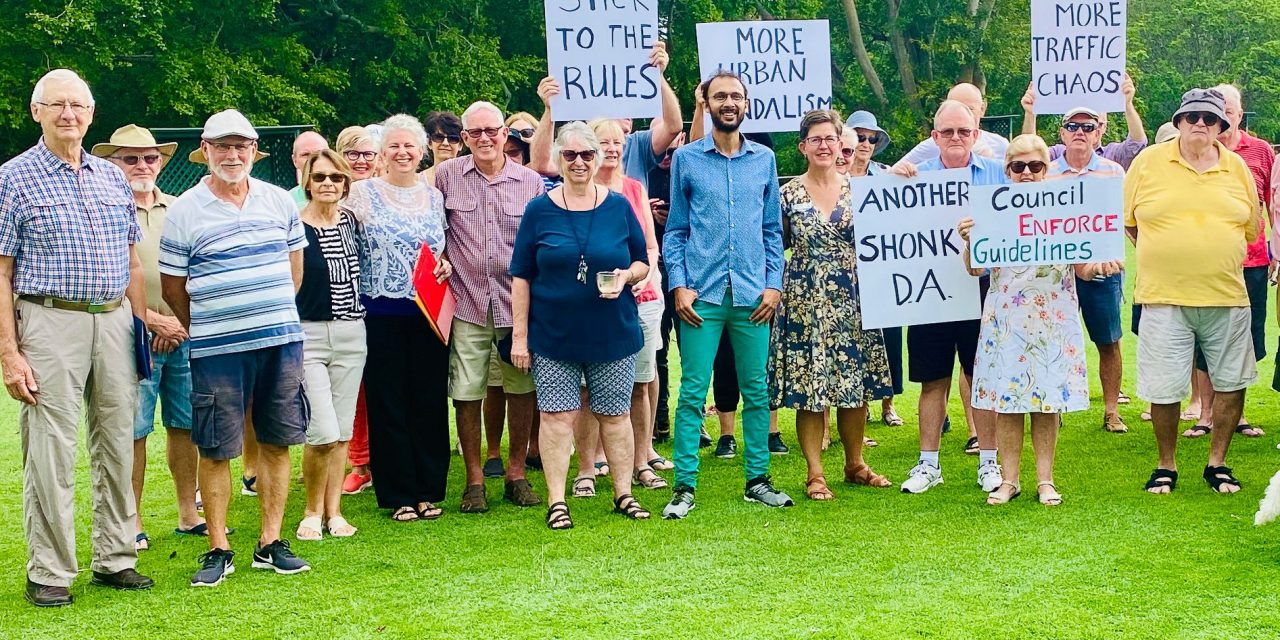 Gabba Ward Councillor, Jonathan Sri says that residents across Brisbane are frustrated by over-development and that this is shaping up as a major issue for the March city council election.

Cr Sri says that this is particularly an issue in the marginal Coorparoo Ward which is currently held by the Liberal National Party (LNP). Due to the boundary redistribution that has seen the Greens-held suburb of East Brisbane moved out of the Gabba Ward, the Greens think they can be a threat to the LNP in Coorparoo.

Cr Sri says that residents gathered this morning (Friday the 31st of January) to protest against a highrise development proposal at 18 Park Avenue, East Brisbane. The building, he says, is taller and bulkier than the neighbourhood plan allows and threatens to overshadow neighbouring homes.

Cr Sri says that in respect to this proposal, developers lodged a code assessable DA (without public notification) to demolish an existing block of medium-density apartments and replace it with an 11-storey tower, which he says has denied neighbours any legal objection rights.

“While the Neighbourhood Plan requires setbacks of 10 metres and 6 metres to the side and front property boundaries, this developer proposes boundary setbacks of only 1 to 2 metres, resulting in less green space, poor airflow, less natural light and a much bulkier tower.

“The plan specifies a maximum site cover of 40%, but the DA proposes 60%, meaning a potential windfall for the developer of millions of dollars in additional real estate value.”

Cr Sri says the rules must be enforced consistently, and that any decision to allow exemptions to setbacks and site cover limits would carry a strong whiff of corruption. “No-one is against a bit of density in this area – we are simply concerned that this developer is proposing to ignore the rules that every other property owner has to comply with.”

“When council permits developers to build taller and bulkier towers than the plan allows, we end up with worse traffic congestion and shortages of public green space and community facilities.”

“It’s outrageous that our planning system allow non-compliant towers to be approved as code assessable DAs without any public notification or legal objection rights. Most residents won’t even know this is happening until the demolition crew moves in.”

“When developers don’t stick to the rules and try to hoodwink residents, it corrodes faith in the whole system and makes it harder to win public support for the positive, sustainable, medium-density projects we really need in Brisbane.”

The Greens candidate for Coorparoo Ward, Sally Dillon, says that, “a lot of residents are frustrated that there’s one set of rules for big developers and another set of rules for the rest of us.”

“This election, the Greens are calling for planning law changes so that height limits, boundary setbacks and site cover limits are strict and non-negotiable.”

“The cumulative impact of so many oversized, poorly designed projects is choking our neighbourhoods,” Ms Dillon said.

The Greens says that as well as objections to excessive site cover and inadequate trees and green space, residents are concerned that the East Brisbane project, which sits on a high-volume cycling corridor, will lead to increased conflict between cars, bikes and pedestrians.

The Council elections will be held on Saturday the 28th of March.

The Westender looks forward to bringing more stories and profiles of all Gabba Ward Candidates in coming weeks.