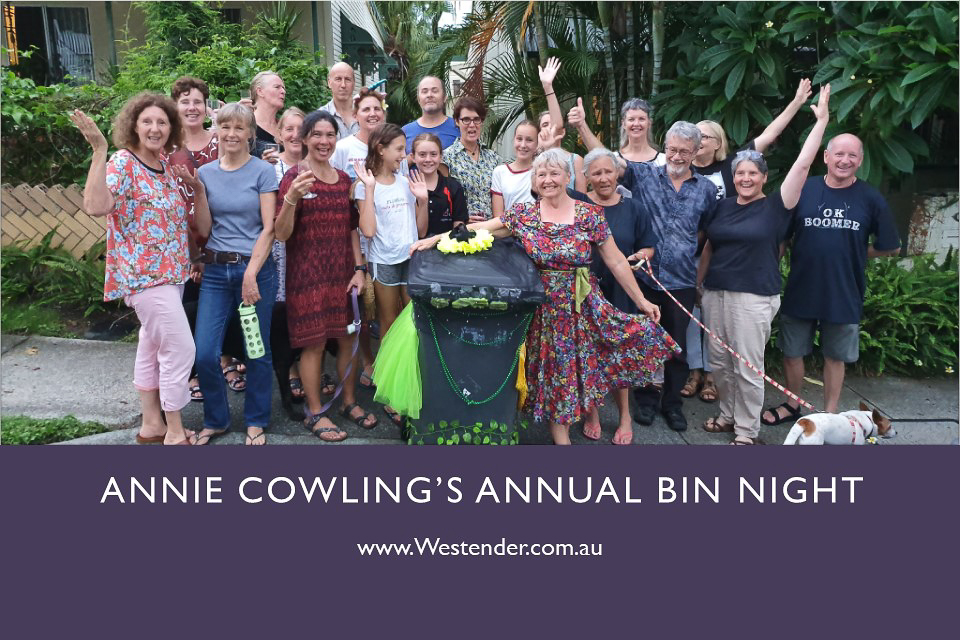 On Tuesday night (10th of February) cheered on by neighbours and friends, Annie Cowling put out her general waste bin for the first time in 12 months.

Those of us who gathered last night were amazed to find that not only had Annie’s bin not been put out for a year, it wasn’t even full.

Annie admits that living alone helps, but her achievement is none-the-less remarkable. So, how did she do it?

There’s not a lot left after that Annie says.

Last year Annie said her bin was a bit smelly, because it contained a year’s worth of poo from her dog Louie; but Annie has since installed an in-ground dog poo composter that takes not just the poo but also the compostable bags (because Louie does most of his poos while out for walks).

So, what is left for the general waste? Annie says she tries not to buy products with non-recyclable wrappings, but does occasionally have polystyrene trays, and chocolate wrappers (she admits to eating a lot of chocolate), an old clock and a broken lamp, old thongs and old runners that can’t go into the recycle bin.

Annie said that this is her personal journey and it is integral to her activism for a coal-free economy and for a more sustainable future. However, she did throw out the challenge to her neighbours last night to work towards a single bin for their street. Annie said she doesn’t really need a rubbish bin anymore and would like to see local Councils considering an approached that phased out bins for every dwelling. She reckons its time.

Annie held her annual bin night on Tuesday, 15 February 2022, and is now in her fifth year.

On ABC radio recently, she issued a challenge to listeners to join her once a year bin club.