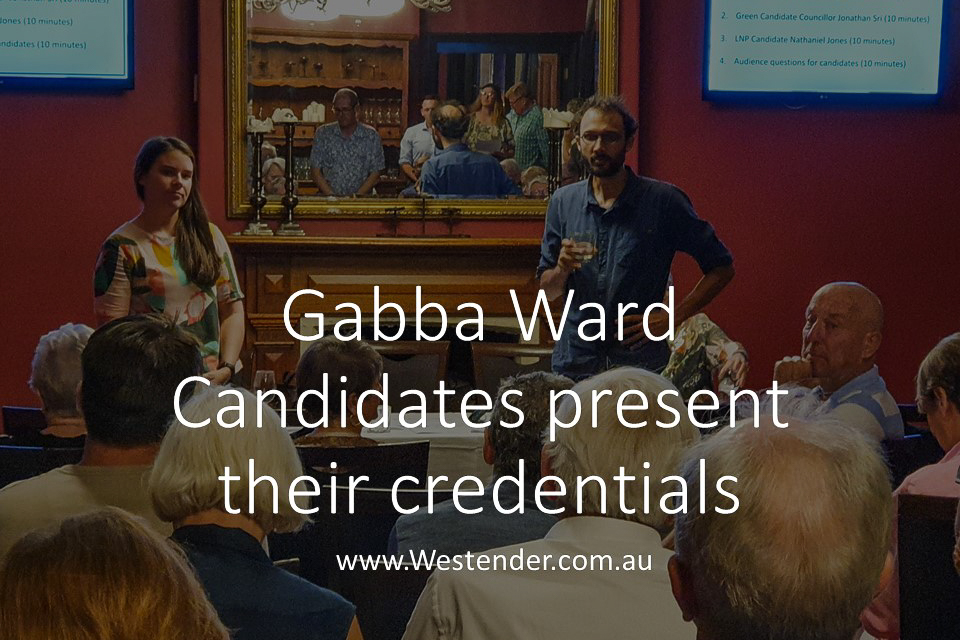 There’s a Brisbane City Council election coming on the 28th of March, and we’re starting to hear a lot from the candidates.

It was a small event with about 50 people attending the regular monthly KPNW meeting, the last 30 minutes of which was set aside for candidates to present their credentials and respond to questions.

This was the first time that Jonathan Sri and Rachel Gallagher have had an opportunity to present along side each other at the same forum. LNP candidate Nathaniel Jones was an apology due to work commitments.

Each candidate was given just 10 minutes to tell us why they were standing for election.

Presenting first, Rachel Gallagher said that she studied law and worked as a planning and environment lawyer. More recently she said, she has become a mother and a scientist who has spent the past three years completing a thesis about the impacts of new developments and how the urban form is changing in the Gabba Ward.

“I am running for Council, because I want our city to be better,” Ms Gallagher said.

She said her research shows that in Kangaroo Point the re-development pattern has been to replace small cottages with high-rise buildings, none of which she said has provided the level of amenity to the community that we should expect.

Ms Gallagher said that as she campaigns, people are raising concerns with her about Council approving projects that are completely inconsistent with Neighbourhood Plans.

“What’s the point of having these plans if the Council deviates from them so heavily?”

Ms Gallagher said she wants to return the power to shape our suburbs to the people who live there.

“In the last ten years, twenty percent of Brisbane’s urban in-fill (new dwellings), has been in The Gabba Ward,” Ms Gallagher said, “That’s huge in an area that accounts for less than two percent of the land-mass.”

Ms Gallagher said that while Brisbane City Council has a policy to concentrate new development around existing transport nodes, there are no real transport nodes or busways in The Gabba Ward where so much development is occurring. She said this raises questions about where new housing should go and she thinks that Council should be having that conversation with the whole of Brisbane.

“Labor is committing to bringing us all together, to plan the growth for Brisbane in a holistic way, that looks at infrastructure and development at the same time,” Ms Gallagher said.

Ms Gallagher’s appeal to her audience was a personal one. She said she wants a city for her daughter as she grows, that is green and shaded with parks, and that is easy to get around. And she wants her parents to be able to age in place, and to travel within the city with ease.

“There needs to be infrastructure in place for everybody … that’s the Council that I would like to see for my family and for everyone else’s families,” Ms Gallagher said.

Cr Sri said that he has been working for the past four years for a city that is, “… more sustainable, more beautiful, more equitable, and more democratic.”

“My vision for the city is one where people don’t have to spend as much time stuck in traffic congestion, travelling long distances to get to where they need to go, where shops and services, and high quality public parks and community facilities are in close walking distance… where our streets are vibrant, active precincts and small businesses are supported to remain in the community even as rents increase.”

“And I want a city that is kinder. Where homelessness is falling, rather than rising, and where we pay serious attention to social isolation and community disconnection.”

Cr Sri said that despite being the only Greens Councillor, he has had a number of wins and has been able to influence Council policy. He said that for example, when the Greens first proposed free public transport for seniors, the idea was ridiculed as unrealistic, but the policy was subsequently adopted by the LNP and introduced in late 2019.

“By circulating ideas in the public realm, by arguing for them strongly, by demonstrating the case and working collaboratively with the public service, you can actually get tangible, positive outcomes,” Cr Sri said.

Cr Sri said that all candidates will probably be focussing on similar things during the campaign, such as identifying the need for more public green space and improved transport, but the question, he said, boils down to how all this will be paid for.

The Greens propose, he said, that the current developer infrastructure charges are doubled – from $20,000 per bedroom, to $40,000, with $10,000 for each additional bedroom. The Greens would add to this a levy on the estimated 20,000 homes that have been vacant over the long-term. This, they propose, will add incentives to owners to rent out their properties.

The other big-ticket commitment from The Greens is to have free off-peak public transport for everyone, which Cr Sri said is estimated to cost about $80M annually, but which they consider would ease congestion on public transport at peak times, and improve access to transport for people who are less well-off.

There was only a short time for questions, and most were addressed to Cr Sri.

In response to an audience question about why there is a constant battle between developers and residents, Ms Gallagher said that she thinks it’s a cultural issue within Council. The LNP has dominated Council since 2004 she said, and there now needs to be a complete overhaul of the planning process.

Ms Gallagher said that the current Council indulgences in what she calls, ‘slow development creep’ where applications for approval will be submitted which are just slightly over the planning scheme limit, and they’ll sit on it for a few years, and another approval application will come in that is slightly higher. She said the development proposed at 352 Vulture Street in Kangaroo Point provides the perfect example, where the initial neighourhood plan allowed for 15 storeys, but the first 2016 approval was for 20, and current proposal is now for 30 storeys, and still nothing has been built.

Ms Gallagher said that the way in which Council conducts consultations needs to be broadened to include all stakeholders, including children, the aged, and people with disabilities, not just those who are able to participate in the formal submission process.

Cr Sri agreed with Ms Gallagher that there is a cultural problem within Council but said there is also a structural problem. He said the reason the current culture has flourished is because the Council’s performance-based planning scheme allows planning officers to make discretionary decisions about what they consider to be ‘public interest’ trade-offs, extra height for increased public space for example.

Ms Gallagher said that she does not know how infrastructure charges levied on developers is spent but noted that the Labor State Government has now legislated for Councils to report on charges and how they are being spent. The first reports are due in April 2020, after the Council elections.

Cr Sri was asked how he justifies, as a Councillor, being involved with protests that hold up the traffic, and “act against the public”.

Cr Sri said that while he is not the organiser of the protests, he has attended and supported some of them.

“The question of whether that is appropriate for an elected representative comes down to whether you think we have a well-functioning, democratic system”.

“I take the view that our political system is fundamentally flawed, and the major parties have a very cosy relationship with big-business, and that frequently, decisions of public policy are made in the interests of vested corporate interests…”

Cr Sri said he thinks there is a case for protest in certain circumstances, depending on the issue and its seriousness and urgency. He said that given inaction on climate change, especially at the Federal level, there is a case for public protest and civil disobedience.

He said he does not spend a lot of time attending protests, but he said,

“The Courier Mail reports on it a lot, because its sensational, and they want something to beat me up about, and they don’t like my advocacy on issues like property development…”

Ms Gallagher was not given an opportunity to address this question.

Candidates profiles can be found here: