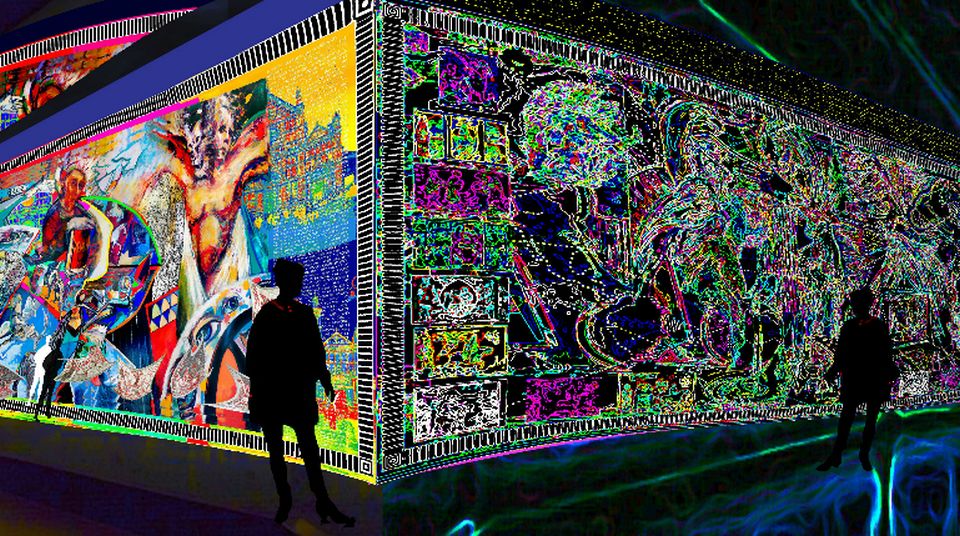 A spectacular illuminated tapestry created by an RMIT researcher and artist that incorporates phosphorescent nano-pigment particles will be unveiled next week in Europe.

The 36-metre work uses the particles to recreate with light a re-imagination of the 14th century Anger Apocalypse Tapestry, which represents the biblical Book of Revelations.

Dr Irene Barberis’ creation, Tapestry of Light: Intersections of Illumination, is a glowing work that features elements of the original tapestry’s 90 scenes.

It will be unveiled at Brussels Cathedral on 28 April in an exhibition curated by Emeritus Professor Michelle Brown, former Professor of Medieval Manuscript Studies at the University of London.

In mid-June, the work is set to travel around museums and cathedrals in Europe, UK and the US, with its next stop being Canterbury Cathedral in October.

Through a combination of technology and art, Barberis enables visitors to view the Apocalypse across three dimensions.

“The visitor’s first glimpse will be up-close and in natural light, where a connection can be formed with the tapestry despite its large scale,” she said.

“And then as the natural light switches to ultraviolet, the tapestry images become much more dramatic and intense – a sense of drama is introduced to the composition.

“Finally, and once all of the light has disappeared, the tapestry begins to glow with phosphorous lights created through illumination thread.”

Barberis, a senior lecturer, said the inspiration to create the artwork came from her first visit to the Anger Apocalypse Tapestry in France in 1998.

“The complexity and the poetry of the experience, combined with my resultant immersion into the scenes of the Apocalypse, was incredible.

“And as I continued to look on, I started to think about what it might be like to do a reimagining of this significant artwork – and one potentially done all in light.”

Nineteen years later, Barberis is now one of the few female artists to have tackled the full cycle of the Apocalypse in an art form.

The technology at the centre of this creation was designed and developed by former RMIT Professor David Mainwaring and was woven into the tapestry at Flanders Tapestries in Belgium, which has undertaken commissions for artists including Grayson Perry and Damien Hirst.