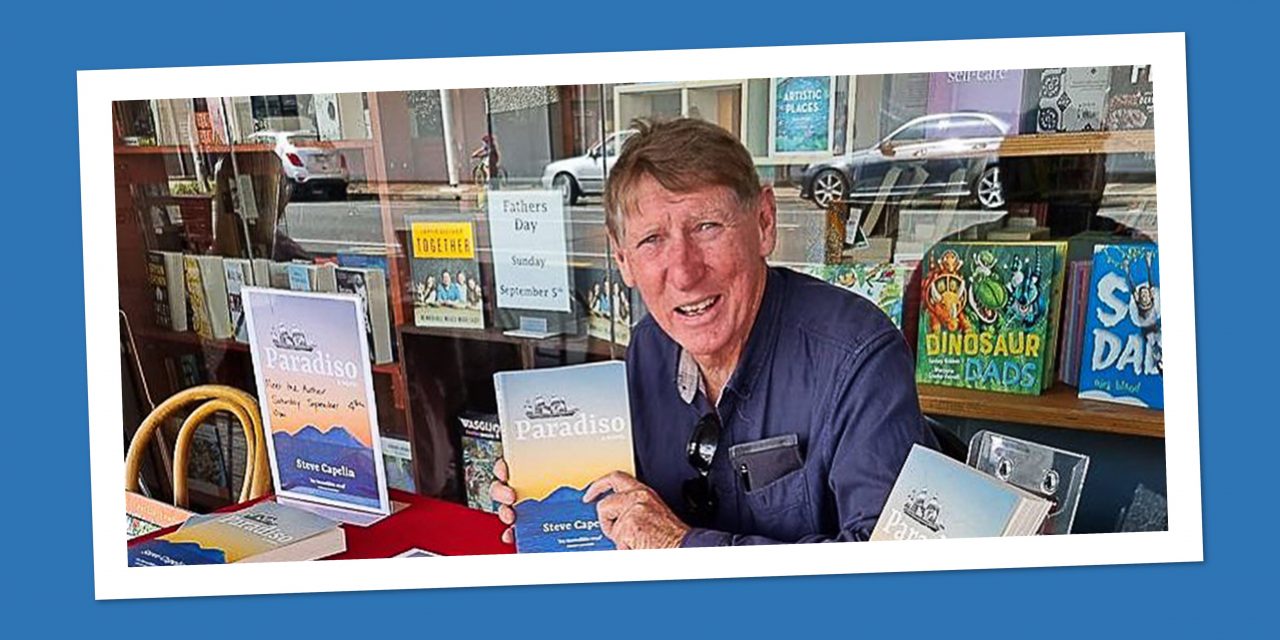 History is never written by children, and family history is rarely of interest to those outside the immediate family.

Steve Capelin turns these two adages on their head in his meticulously researched first novel Paradiso.

Paradiso is the story of how Steve’s ancestors arrived in Australia from a small village in Veneto, northern Italy. Narrated by nine year old Domenico and his sister Marietta, it is a tale of poverty, adventure, boredom, death, misplaced hope, women’s business and the indomitable nature of the human spirit.

The novel takes the reader back in time to the late nineteenth century where we join Domenico and Marietta and their family living in grinding poverty. We learn of their father Lorenzo’s dream of escaping to a promised land and their mother Caterina’s deep scepticism about the venture. However, Caterina eventually agrees to leave her beloved village behind and along with her sister-in-law’s family join the expedition to set up a utopian settlement in the Pacific.

From Veneto, Capelin takes the reader on a quickstep journey to Barcelona through the Suez Canal to Aden and then onto Singapore before the villagers arrive at the promised land – Port Breton in the wilds of Papua New Guinea. Each place and hardship along the way are described through the innocent eyes of Domenico and the older, more worldly eyes of Marietta – complete with smells, visceral detail and the odd fart.

The attempt to create a new settlement in New Guinea is a disaster. Following multiple deaths and chronic illness that the hardworking ship’s doctor Goyon cannot cure, the remaining passengers ‘persuade’ the captain of the ship to sail for Australia. Amazingly most of them manage to survive because of the generosity of the French government of Noumea and the philanthropy of some Australian business leaders.

Steve Capelin is a former playwright with acclaimed Brisbane Community Theatre Company Street Arts and there is a distinct filmic quality to his storytelling as the narration shifts quickly back and forth between Domenico and Marietta. In fact, there were times while I was reading the novel that I imagined myself sitting in the theatre watching a two-handed play.  All of which leads me to concur with Julian Pepperell that Paradiso would make a great TV mini-series.

When I finished Paradiso, I found myself reflecting that while getting to Australia was never easy, there once was an element of compassion and understanding for the plight of boat people fleeing economic poverty. Even if 40 years after their arrival the Government might lock them up and conscript them as happened to Domenico.

The humane treatment of the desperate, ragtag bunch of Italian peasants who arrived in Sydney in 1881 stands in stark contrast to Australia’s current harsh migration regime where people arriving by boat are either turned back or transported to various Pacific Islands to await their fate.

So do yourself a favour, support a local author and buy yourself a copy of Paradiso. You won’t regret it, as Venero Armano says: it is an incredible read.

Paradiso was published in July 2021 by AndAlso Books

Alan (Fox) Rogers was born on the Magdalena River in Columbia, South America. He has lived in various parts of England and Scotland until his family moved to Australia when he was 13. In 1977 despairing of Queensland politics, Alan headed across the ditch to New Zealand and embraced a hippy lifestyle. He worked for nine months of the year on a community farm and spent summers on the road as Mr Fox, the clown. Fox returned to Australia with his family in 1984 and continued working as a freelance performer before getting a ‘real job’ as a Community Arts Officer with the Brisbane City Council. He spent over 30 years working in local government before retiring. He now plans to travel, spend more time with his grandkids and pursue his long-held dream of becoming a writer.