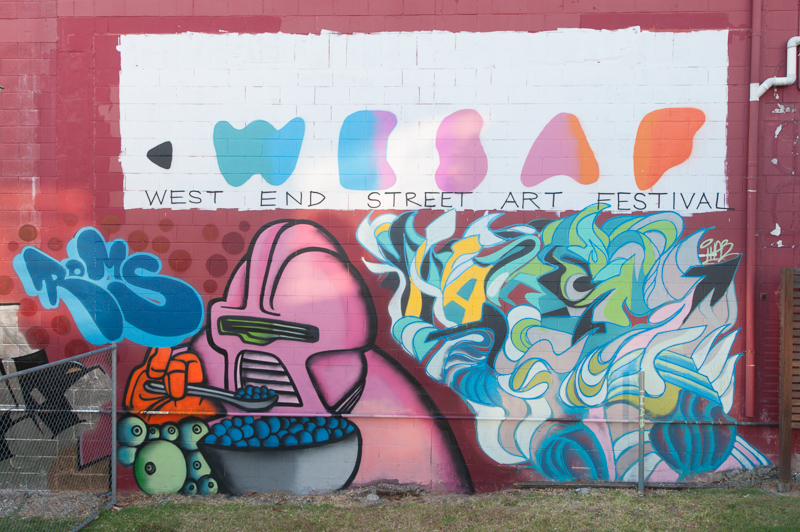 A brand new West End Street Art Festival will be taking off on 22nd of October with some of Brisbane’s most exciting street artists brightening West End’s streets with murals, food stalls, markets and live music. It aims to create a great day out for the entire family as well as raising $10,000 for homelessness charity Orange Sky Laundry.

The festival is the brainchild of Jenna Williams and Ihab Imam, and I caught up with them to find out where the idea for the festival came from.

“This was a really good opportunity to promote street art as an art form in itself. We really wanted to get it out there on the facades of buildings and use it as a force to bring the community together, to beautify the streets, to celebrate arts and culture.” Jenna said.

The artist line up includes some of Brisbane’s best street artists and muralists: Drapl, Leans and Treas (The Co-Creators), Joel Fergie, Jordan Bruce (Brightsiders), Cherie Buttons, Steve Falco (ProcreatiV), Dan Krause and Roms who have all previously contributed to the local street art scene for events such as the Brisbane Street Art Festival and Brewsvegas as well as livening up the Boundary Street Markets, Beach Burrito Company and the Boundary Hotel to name just a few.

Ihab says that the event is about doing something that bonds the whole area.

“It’s more than a piece of art and an artist, it’s about the whole community and lots of artists contributing. People want to be involved in something like that, so we thought, it would be a really good way of doing something the average person could really enjoy, which is a market festival while doing something for a vulnerable group, as homelessness is a big issue in the inner city and tying all that together so that people have a good time and contribute to a cause that’s really important” Ihab said.

Ihab and Jenna’s professional backgrounds have been a real advantage in helping them organise the festival. Ihab has a background in architecture and project management as well as being an artist himself. After doing a series of murals for the Heritage Libraries in the University of Queensland, he wanted to give something back to West End and painted a large mural in the alleyway next to Vinnie’s on Boundary Street:

“So many people generously drop off clothes and things that could really help the Vinnie’s cause, so I just thought that in conjunction with them, it would be a really good space to lift it up, decorate it and make people feel they’ve come together as a community” Ihab told me.

Jenna is a social entrepreneur, working on start-ups in the mental health and disability space.

“I’ve always been quite passionate about the good that business can do in a charitable sector, having business models behind doing good and there were elements of that I felt we could incorporate in this. We started off this project seeking sponsorship to pay for the festival. That proved to be spectacularly difficult. We really wanted to make sure the artists got paid, so we used all the cash we got in sponsorship for that purpose, but it wasn’t going to be enough. Through our discussions we realised the way to make the festival sustainable would be to put a market into it and then we would be able to operate it annually,” Jenna said.

As to how a successful festival would look like to them, Ihab said “It’d be good if it was appreciated and got a nice crowd there too so that all of the artists that did all that work feel valued. There’s so much great stuff to see, so we’re really excited about that. More artists wanting to be involved next time as well, I think that would be cool.

Tickets are $10 at the door, or $5.50 pre-sale. Purchasers of pre-sale tickets go into a draw for a range of locally donated prizes.

Toks Ojo has a keen interest in Street Art and for the past year has been busy taking photographs for a new book he plans to publish on Brisbane’s graffiti and street art.