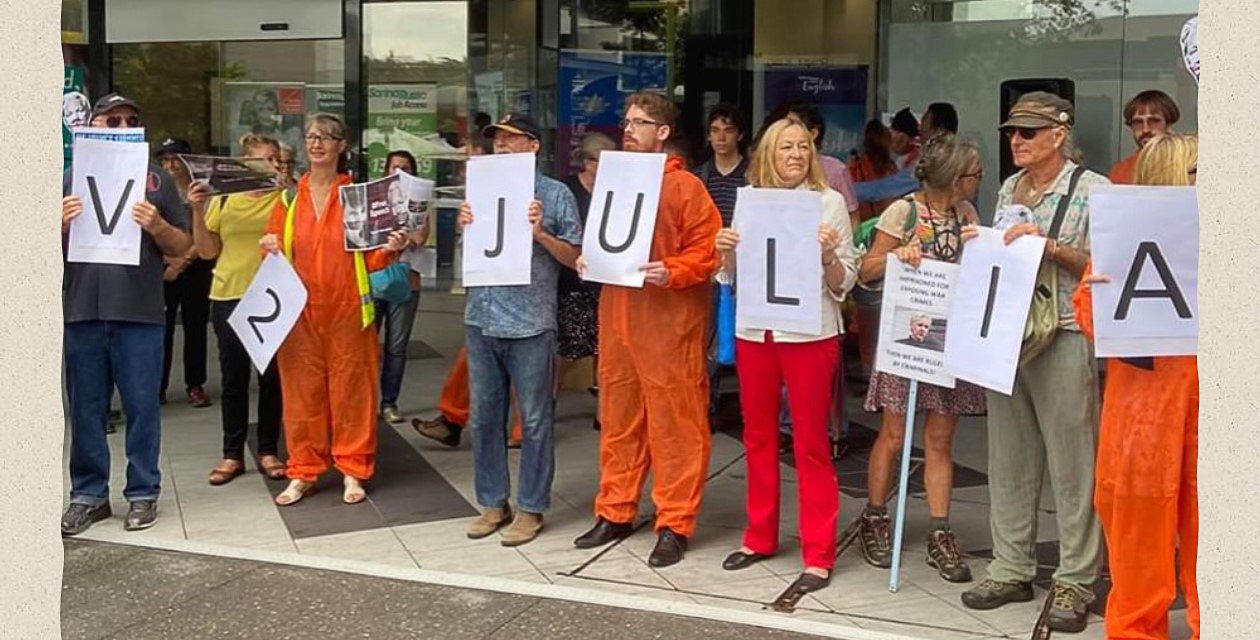 Julian Assange‘s father, John Shipton, will speak in Brisbane at Bunyapa Park in West End about the Assange case and its implication for journalism on UN Human Rights Day, Thursday, December 10 at 5pm.

Mr. Shipton has recently returned from his son’s extradition hearing at the Old Bailey in London and is embarking on a tour of Brisbane and the New South Wales north coast where he will talk about his son’s plight.

“Julian’s ten-years fierce and unrelenting fight for truth has exposed squalid diplomatic arrangements and war crimes in which millions of people were slaughtered, and tens of millions of homes destroyed. It is a task we take on, fighting to bring our speaker of truth home to family and friends. We appeal for your help to Bring Julian Home!”

Julian Assange exposed war crimes and human rights violation by the USA and its allies in Iraq and Afghanistan. Because of this, he is currently the victim of British injustice in Belmarsh High-Security prison, where the Covid19 virus is currently running rampant, awaiting extradition to the USA where he may be sentenced to 175 years for some of the most important pieces of journalism of the twenty-first century.

The most famous war-crime WikiLeaks revealed, the Collateral Murder, resulted in the imprisonment and torture of the whistle-blowers, Manning and Assange, while none of the perpetrators has been charged.

The Afghan War Logs revealed war crimes by coalition forces strikingly similar to the war crimes revealed recently by the Brereton Report where Australian SAS forces were engaged in crimes such as slitting the throats of young Afghanis to ‘blood’ junior soldiers.

In Australia whistleblower David McBride, who tried to raise his concerns about these Australian war crimes in Afghanistan, has been charged by the government for supposedly compromising national security and could be imprisoned for 50 years.

McBride had tried to raise his concerns through official channels and when he was ignored, he passed on the classified information to the ABC. This information formed the basis for the Afghan Files, which reported allegations of unlawful killings and misconduct by Australian special forces in Afghanistan.

As a result of airing the Afghan Files, the ABC was raided by the Australian Federal Police (AFP) in 2017.

This year the ABC’s legal challenge to the validity of the raid was dismissed by the Federal court.

The ABC’s news director, Gaven Morris, said the decision was “really disappointing” and a blow to press freedom and the public’s right to know. “Urgent law reform is clearly required,” he said.

The managing director of the ABC, David Anderson, said the ruling was further evidence of the urgent need for explicit protections for public interest journalism and for whistleblowers.

“No one has been able to demonstrate a direct threat to national security as a result of those stories,” David Anderson said.

“When the AFP executed its search warrant here at the ABC, its raid was seen – internationally – for exactly what it was: an attempt to intimidate journalists for doing their jobs.”

In the guise of national security, the reporting of war crimes by the USA and its allies is being suppressed world-wide through the persecution of journalists and whistle-blowers.

On UN Human Rights Day, Thursday, December 10, John Shipton and Ciaron O’Reilly will address a public gathering at Bunyapa Park, West End, to call for the Australian government to abide by the UN Human Rights conventions and bring Julian home.

The United Nations has called on the Australian government to act in defence of Julian Assange for the past five years, but has been ignored. Local Councillor Jonathon Sri will introduce John Shipton and welcome him and speak to the issues of war crimes and journalistic responsibility.