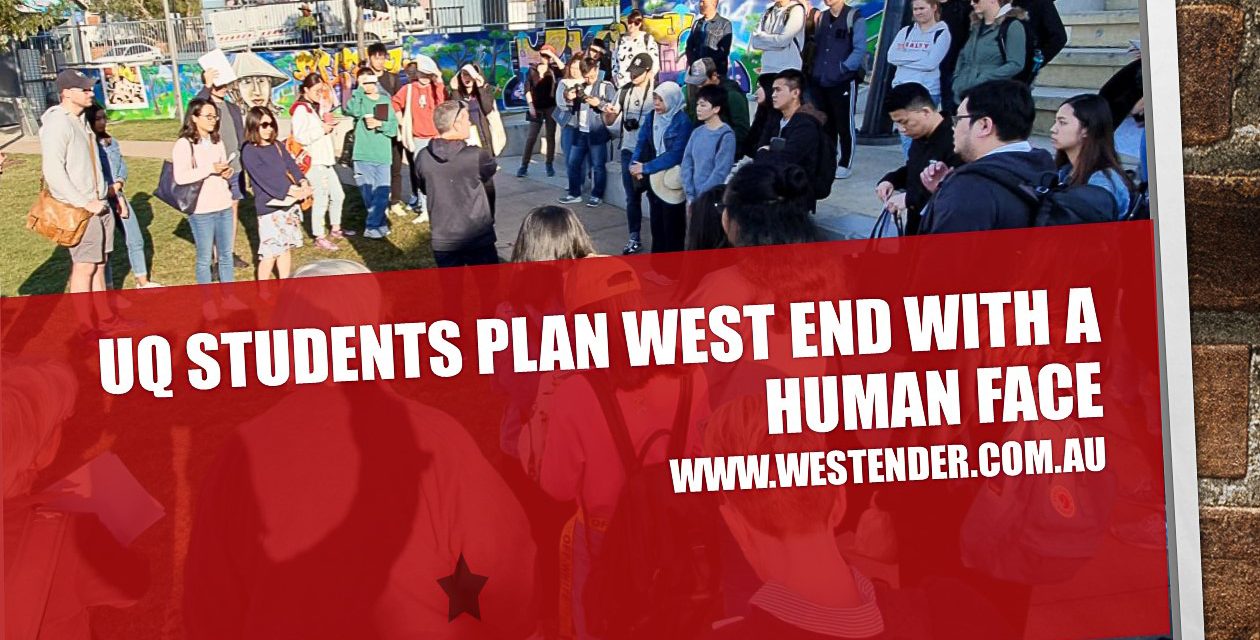 “West End is one of Brisbane’s suburbs experiencing the most pressure for development” says Dr. Sébastien Darchen of UQ’s Planning program.

In August of this year he set a group of more than fifty of his advanced planning students to re-imagine West End’s central area to resolve its main planning issues. The course was designed for students to reflect on what is socially acceptable densification in areas like West End. Particular attention was paid to accommodating growth (with 3 choices of density scenarios) and at the same time retaining the identity and the design attributes that make West End such a great place to live and work.

Dr. Darchen, lead editor for “Electronic Cities”, a forthcoming volume on music in the city said:

“Students in planning should learn to preserve features that make great neighbourhoods. In West End I tried to explain to students that places where creativity can flourish should be preserved, those places make West End a unique and vibrant community.”

“In their final reports they proved very innovative in designing new spaces for creative industries, planning for a more diverse and sustainable economy and proposing mixed-use developments along Boundary Street that address the challenge of the “missing middle” and “third places” – neither home nor work – where people from all over the metropolis can come to socialise,” Dr Darchen observed.

A noteworthy feature of the project was the high level of collaboration between Dr Darchen’s students – both under and postgraduate – and local people. Members of the active local community group Kurilpa Futures not only provided background talks on the character and community life of the neighbourhood, but also took a morning out to walk small groups of 8-10 students round the study area of the central fifty hectares around Boundary and Vulture Streets, later participating in day long feedback sessions with the students half way through the semester.

Significant and creative ideas emerged. Different groups proposed a mix of conservation and appropriate cultural and creative development, improving pedestrian conditions in the main shopping and community areas, as well as inclusionary zoning for affordable housing to maintain the area’s tradition of social, cultural and ethnic integration. Several proposed a “Conservation Zone” for the area of traditional workers cottages and old colonial dwellings south of Vulture Street, as well as a new Council sponsored Creative Industry hub on Vulture Street itself. A core “Green link” of shady tree lined and planted verges would stretch from the South Bank Gardens along Russell Street crossing Boundary Street, and running along Jane Street to Davies Park and the river.  Continued and enhanced community involvement in local space would support new and expanded community gardens and planted verges. Students also proposed collaboration in managing these green spaces and community areas with local groups.

No less significant, observed Phil Heywood, one of the Kurilpa Futures team who worked with the students, were the original contributions to method that groups adopted.

“The idea of a ‘Conservation Zone’ is a new, though overdue, one for Brisbane,” he observed.

“At the moment, we only have heritage designations on individual buildings, leaving interesting and significant areas at the mercy of any developer who sets out to acquire them,” Mr Heywood said.

Inclusionary zoning, would also be a first for the State, ensuring that economic progress was combined with social justice. Developers would be required to make available a proportion – possibly around 20% – of all new dwellings for affordable housing in conjunction with the State Government’s Department of Housing and Communities and not for profit organisations such as the Brisbane Housing Company and faith based providers.

Most significantly, the projects established the need for a new coherent plan for the 200 hectares of the whole suburb, as well as this exemplary approach to its central 50 hectares.

“This scheme” observed Mr Heywood, “shows how to plan inner cities to meet the needs of everyone, not just developers investors and through traffic drivers”.

See more on the Boundary Street Precinct: Ideas for the Future at this link – https://kurilpafutures.org/events/boundary-street-precinct/