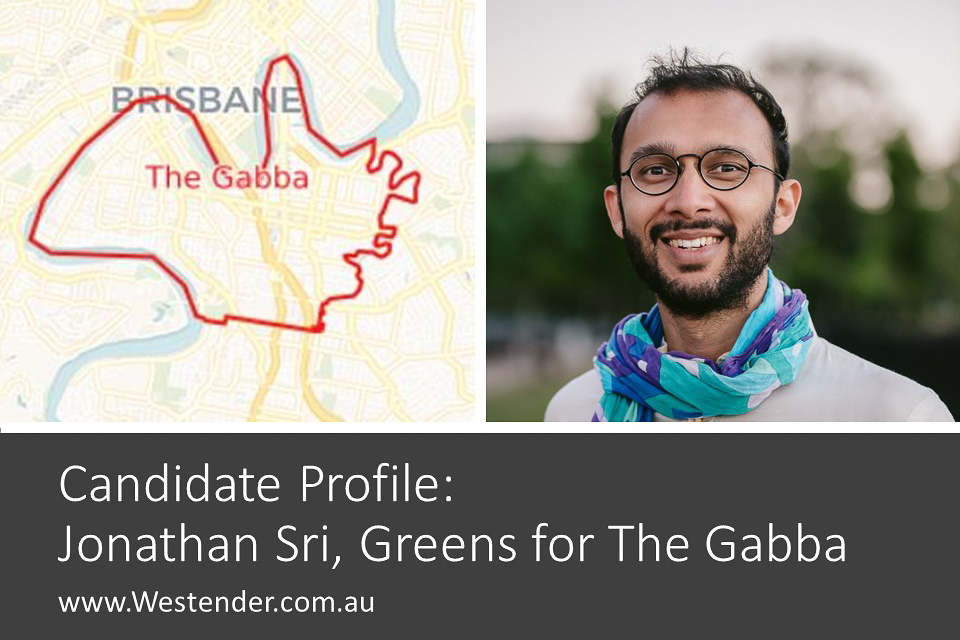 The Westender recently wrote to the candidates for The Gabba Ward in the coming Brisbane Council Election.

Read the response below from Greens candidate and current Councillor, Jonathan Sri

I’ve lived (and worked) in the Gabba Ward for most of my adult life, renting in various sharehouses around West End and Highgate Hill.
I was drawn to 4101 because it was a walkable neighbourhood that’s convenient for cycling, and because it was a hub for live music and creative activism.

My favourite sharehouses have been at 157 Dornoch Terrace (where housemates introduced me to my first experiences of guerilla gardening), in the middle of Boundary St – No. 120 (where we started running weekly Courtyard Conspiracy events behind the blue door) and down at 5 Vulture St near Montague Rd (which hosted a lot of discussions about political activism during the G20 and the Campbell Newman years).

I moved into the suburb of East Brisbane in 2014 (still in the Gabba Ward) after rising rents made it more difficult to find affordable sharehouses in West End. After I won the 2016 council election, the LNP sent Brisbane City Council inspectors around to my East Brisbane sharehouse and issued the landlord an enforcement notice because there were more than 5 adults living there (this 5-adult limit is a stupid rule, unique to Brisbane, which discourages medium-density sharehouse living and discriminates against low-income tenants). Not long after that we moved onto a houseboat, currently moored in East Brisbane.
I do currently live in the Gabba Ward, but the imminent redrawing of electoral boundaries would result in me living a few hundred metres outside the ward depending on where I end up mooring my houseboat.

We have to live within the planet’s natural limits and restore the ecosystems that nourish us if we are to survive as a species. ‘Social Justice’ and ‘Non-violence’ are ideas that everyone can get behind, but the devil’s in the detail as to how we actually enact and embody those values. I don’t think it’s possible to create a sustainable society that upholds those values if we encourage individuals to relentlessly pursue their own financial self-interest ahead of all else. Neoliberal capitalism is incompatible with true sustainability, social justice, peace and participatory democracy.

I’m especially passionate about grassroots participatory democracy because I think the flaws of our hierarchical representative democracy underlie so many of the challenges we’re facing today. People don’t trust political parties because they know whoever gets into power is eventually going to be co-opted and corrupted by the system.

A political movement can have a long list of nice-sounding changes it wants to make once it’s in power, but if you don’t have a clear answer as to how you’re going to resist being manipulated by big corporations and vested interests, there’s nothing stopping you from selling out the community you represent. Decentralising decision-making is crucial to guard against corruption and ensure better quality decisions are made by drawing on the wisdom of as many people as possible.

Before becoming the current Councillor for the Gabba Ward, I worked in a range of fields that equipped me with the skills and knowledge to represent our community, from working as a musician and events coordinator in West End, to working in mediation in remote Aboriginal communities in the NT, to working as a full-time live-in carer for refugee children who came alone to Australia by boat.

But it’s my past 4 years as a city councillor that have really helped me grow into being a better representative for the Gaba Ward. There are definitely a few things I’d do differently knowing what I know now about how the system (and in particular, the other political parties) really operates.

I’ve also developed an intimate knowledge of the community I represent. You can name any street in the Gabba Ward, and I can tell you how bad the traffic is, what kinds of drainage and flooding problems it has, where the pedestrian safety hotspots are and even how well the neighbours know one another.

Over the past four years, I’ve served on the Lifestyle and Community Services Committee, the City Planning Committee, and the Public & Active Transport and Economic Development Committee, and so have a great deal of specialist insight into these areas of council.

In general, a lot of people seem more anxious than hopeful right now. For many, the future feels very uncertain.

Locally, residents are hoping that our city council will start listening and responding to the community’s needs rather than imposing top-down change. A lot of people are concerned about the negative impacts of over-development, and that the boom-bust construction cycle has left vulnerable members of our community behind.

People are concerned about inadequate public green space, and the shortage of community facilities (such as affordable meeting rooms and halls). A lot of people are very concerned about homelessness, high rents, overpriced housing and the lack of secure tenancies, while others are more concerned about the prospect that property values could fall.

Lots of residents are hoping for improvements to public transport, pedestrian safety and bike safety, and several people have complained about fast-moving escooters and bikes sharing narrow footpaths with pedestrians.

In some neighbourhoods, residents and business owners are concerned that excessively high commercial rents are leading to more empty shop fronts and small businesses going under. Trade is down for a lot of retailers, which means workers are getting fewer shifts and so in turn have less money to spend in the local economy.

A large proportion of residents really want to see positive changes to our broken political system, but aren’t particularly hopeful that this will happen any time soon.

Some residents are quite concerned about climate change, and hope to see stronger government action on this front.

What is your vision for Brisbane and how do you envisage that taking shape in The Gabba Ward?

BCC can end homelessness by building more well-designed social housing, and funding support workers to help people sustain tenancies. We could require developers to set aside 20% of homes in new developments for public housing.

Vulnerable residents can be settled throughout the city rather than concentrated together. Council-led housing projects can include sustainable design features like greywater recycling, onsite composting and community-owned rooftop solar power plants.

We can also impose heavy financial penalties on investors who leave buildings empty long-term, placing downward pressure on rents for residents and businesses, and increasing funding for libraries, community centres and public parks. This would allow us to buy industrial land along Montague Rd for new parks, delivering new sports fields and dog off-leash areas for West End.

Transforming our public transport network with free off-peak fares and greater reliability, frequency and coverage would reduce congestion on roads like Montague Rd and Gladstone Rd, and discourage rat-running through the back-streets of West End and Highgate Hill. Separated bike lanes on key corridors like Vulture St, and dropping default speed limits to 40 and 30km/h would promote active transport and bring life back to struggling commercial precincts.

Not everybody can afford sprawling backyards or private swimming pools. But if we invest sustainably in public facilities, everyone can still enjoy a good life.

We can fund all this by cutting spending on road widening, reducing outsourcing to private contractors who add fat profit margins, and making developers and mega-wealthy investors pay their fair share.

Yes definitely. The Greens already have very comprehensive policies on climate change. But it’s important to recognise that for many areas of society, the appropriate policy responses and adaptation strategies have already been developed. For years now, experts have been telling us (in great detail) what we need to do. We can’t allow the call to develop new ‘strategies’ or to undertake further ‘studies’ to become an excuse for not taking immediate action.

We urgently need to shift to renewable energy generation, stop approving new coal mines, and gradually wind down existing mines and coal-fired power plants. We need to transform our city’s transport system, supporting public and active transport and encouraging a shift away from using fossil fuel-powered vehicles. We need greener building designs that use less energy and fewer resources in construction, maintenance and operation. We need to revolutionise our food systems to grow more fresh produce closer to where people live, and to drastically reduce the consumption of meat and other animal products.

We need to plant more trees, particularly along urban and suburban streets, with a focus on plant species that can survive a drier climate. We need to stop approving further development within the Brisbane flood plain, and gradually convert existing land uses on flood-vulnerable sites back into green space, such as council  offering to residents in low-lying areas to buy back their properties and convert them into parks. We need to scale up the installation of rainwater tanks and rooftop solar, and increase community resilience by building stronger relationships between neighbours.

How will create cross-party support for your agenda?

I have a pretty good track record for achieving cross-party support for various elements of my agenda. Recently, Labor and the LNP have gotten behind many of my ideas, including calls for new footbridges, free off-peak public transport for seniors, converting golf courses like Victoria Park into proper public parks, and using electric vehicles for the Brisbane Metro.

Ultimately, the major parties are likely to adopt more elements of my policy agenda as they become more worried about losing votes to the Greens.

It’s been an honour to represent the Gabba Ward for the past four years, and I don’t take the responsibility lightly. I’ve learned heaps since becoming a councillor, and believe I have a lot more to offer the community in this role.

I won’t pretend that everyone will be 100% happy with every decision I’ve made, I pride myself on how accessible and transparent I’ve been in my work, and that people know where I stand and know that I listen to the community and fight for what’s right. While some of my methods may seem unconventional, they are undeniably achieving results, both in terms of local outcomes and in shifting the citywide conversation about bigger issues.

Sadly in Brisbane, the parameters of debate about what kinds of futures are possible and what we can reasonably expect local government to deliver have been artificially constrained and narrowed, but there’s no reason we shouldn’t demand more and hope for a council that is more democratic and more open-minded in responding to new challenges.

I believe that our current council is too bureaucratic and risk-averse. Council imposes too many regulations on ordinary residents while failing to hold big corporations in check.

But we can change our city for the better, if we work together and focus on nurturing and connecting up the many amazing community initiatives that are already flourishing in our local area.

A crucial step is to give residents more direct democratic control over how our neighbourhoods change and evolve.