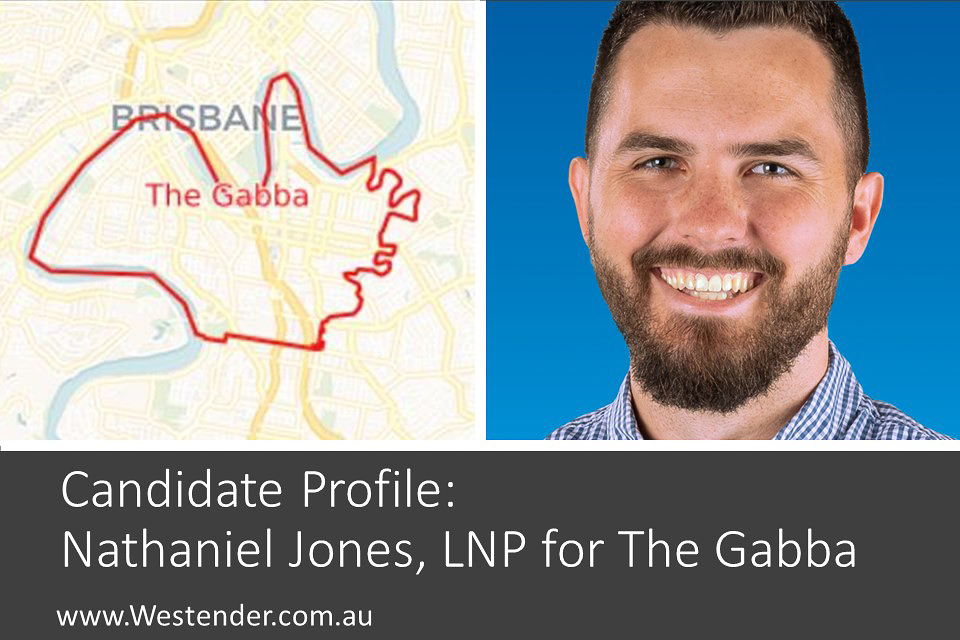 The Westender recently wrote to the candidates for The Gabba Ward in the coming Brisbane Council Election.

I am proud to have been serving as a police officer at West End for more than 10 years so West End and The Gabba ward is like a second home to me.

My connection to The Gabba ward began a long time ago at Expo 88. Since then I regularly came to West End to enjoy the lifestyle it offers, particularly the coffee shops and restaurants. I love that it’s gritty and but also the multicultural vibe. It’s a great melting pot of cultures as well as the old and the new. While only the Three Monkeys is left from my earlier days of coming here, West End has always been special to me. Not least of which because it was where I took my now wife on so many memorable dates.

Kristie and I now love bringing our kids to the area to enjoy some of the best parks, greenspaces and food in Brisbane.

I decided that my values align best with the Liberal side of politics because I believe in:

Finally, in the importance of the economy, as without the balanced budgets delivered by the current Council it would be unable to invest in the services and facilities that the community wants and needs.

I came to West End as a 21-year-old police recruit in 2008. I have seen a lot of changes in that time. I have worked in situations where we had drug-fuelled squats in horribly living conditions as a result of complex mental health issues, as well as domestic violence.

One thing that has taught me is that everyone has a unique story, and as a Councillor I think being able to listen to people’s concerns and work with them to improve the situation would be a key skill I can bring to the job.

I think my background dealing with the homeless would also assist me in tackling some of the social issues in the local area.

As a regular cycle cop I have also become very familiar with the ward’s streets, buildings and community facilities as well so I have a good understanding of the great things we have and the things that we can work on.  I have been so lucky to come into contact with so many local community groups and businesses as part of my daily work. There is a relationship there and it is my intention to be a councillor representing all sections of The Gabba ward community.

The Gabba ward is right on the CBD’s doorst​ep and people love the proximity to all to there is to see and do.

People are telling me they want to continue to be able to get around the local area as it grows and that means continued investment in the roads and bridges we need, but most importantly encouraging people to use active methods to travel such as cycling and walking. That’s why I am so excited about the Lord Mayor’s plans to invest in the area by delivered two new green bridges linking West End to St. Lucia and Toowong.

The other major issue is maintaining our stunning clean and green city while also catering for the growing population envisaged under the State Government’s expectations for population growth.

The investment by the Lord Mayor into the upgrade of Riverside Drive which has transformed the area is just one example of the type of projects that the area needs to enhance our green spaces. The multi-million-dollar investment in Davies Park is another example of investment into the local area by Team Schrinner.

I am also aware that small business struggles given the changing nature of retail. I want to engage with small business in the area to maximise their ability to not just survive, but thrive.  This will ensure the future of our local economy is strong which will drive jobs growth.

What is your vision for Brisbane and how do you envisage that taking shape in The Gabba Ward?

My vision for the Gabba is to improve public and active transport through building new green bridges, upgrading public transport services through the delivery of the turn-up-and-go Brisbane Metro as well as improving CityGlider services by adding higher capacity vehicles with more seats. All of these projects will support sustainable transport use.

I want a clean, green and sustainable city through improving local parks and green spaces and encouraging people to live sustainably and reduce their waste by participating in programs such as the community composting hubs initiative of Council and encouraging recycling and reuse through projects such as the highly successful kerbside collection program.

I also want to ensure that our very diverse community is brought together and end the divisive politics we have seen in recent years.

The fire emergency across Australia this summer has prompted a more urgent conversation in the community about climate change. Are you committed to developing a comprehensive climate change policy and adaptation strategy for Brisbane

I think the approach of the current Council administration is the right one when it comes to sustainability which focuses on action not words.

Council already has a comprehensive strategy when it comes to keeping the City clean, green and sustainable.

The current Council administration is now in its second year as Australia’s largest 100% carbon neutral organisation. Council also has one of the largest solar panel installation in the country spread across many Council buildings. All of Council’s diesel fleet is achieving Euro Standard 6 for emissions and the Brisbane Metro will be 100 per cent electric with zero tail pipe emissions. Council is continually trialling new technologies for a clean fleet, such as hybrid and electric vehicles, and was the first Council in Queensland to install electric vehicle charging stations in a public car park. ​

More than 80% of the recyclables collected in Brisbane are reprocessed/recycled in Brisbane, this reduces cartage cost and benefits residents and local business.

Water is of course is a big issue at the moment and the City as a whole is using less than half the water they did in over a decade ago on a per person basis. This has come through a whole of council approach to water conservation and use, even down to the choice of plants in our parks.

Landfill is also an issue and as you would know comes at cost to environment, in terms of the creating a place to treat and dispose of waste. More than 33% of waste in the general bin is food, in dollars with is about $3500 of food is thrown away by each household each year. Council has embarked on an education program to inform residents of the need to conserve food and plan meals to minimise waste and recently partnered with OzHarvest to reduce food waste.

All of this waste contributes to the production of methane at the Council land fill site at Rochedale. Council captures methane to generate electricity that is fed back into the grid. Our tip shops remove tons of perfectly good items and divert them away from the waste stream

The current administration of Council is 100% carbon neutral and the greenest in the country. Over $481 million was spent in 2018-19 on the initiatives mentioned and many others. The budget spend on green initiatives is expected to increase by about $70 million. The current council is a working example of what other local government jurisdictions should be doing and can do.

I have three main priorities if elected as your Councillor for The Gabba Ward. I want improved public transport as well as more opportunities to walking and cycling locally. I want enhanced opportunities for green space and to undertake improvements to local parks in consultation with the community. I plan to tackle community issues head on and to ensure our hard-working community groups receive the support at a Council level they need and deserve to undertake work that addresses the issues facing the area.

How will create cross-party support for your agenda?