Who cares about Helmet Hair? The case for mandatory helmet legislation

The internet abounds with blogs and sites advocating against mandatory helmet legislation (MHL): laws that only exist in Australia and New Zealand. But if you want to see the peer-reviewed medical science on the efficacy of helmet wearing, you need to go to PubMed, where a search will yield a range of epidemiological studies on the issue.

The arguments for and against MHL are hotly contested, but the science is clear on one thing: helmets do mitigate the risks of serious head injury, and severe head injuries are usually life changing.

“helmet use was associated with reduced risk of head injury in bicycle collisions with motor vehicles of up to 74%, and the more severe the injury considered, the greater the reduction.”

Opponents of MHL take a population health approach which seems less concerned with the benefits of helmets for individual cyclists. They argue that helmet laws have created a perception that cycling is risky, resulting in fewer people riding and so, they claim, Australia has missed out on the community health benefits of cycling.

Harriet Edmund gets to the nub of the issues in the September 2014 edition of cycling magazine, Ride On , finding that some of the arguments against MHL are just plain wrong. For example, while Monash University Accident Research Centre (MUARC) found that there was a reduction in the number of people cycling in Victoria at the time MHL was introduced, “within two years the number of bike riders returned to levels similar to those prior to 1991.” By 2012, she writes, the Australian Bureau of Statistics reported “cycling participation rates are at an all-time high.”

Not to be deterred, MHL opponents reckon that even more people would be riding if it weren’t for having to wear those bothersome helmets. But respondents to a recent survey conducted by the Cycling Promotion Fund and the National Heart Foundation, put safety, road conditions, fitness, hilly terrain, storage of bikes, and weather conditions well ahead of having to wear a helmet as reasons for not riding.

Opponents also talk about a rise in injuries overall as an argument against MHL, conveniently ignoring the fact that helmets are only designed to protect the head, and head injuries are decreasing in number. As Dr Steven Pincus, deputy director of the Royal Melbourne Hospital emergency department told Ride On:

“There are a significant number of patients who come in with smashed helmets and intact heads.”

So why do some people object so vehemently to being required to wear a helmet? Well, a survey conducted by Barclays in London in 2012 and reported by Bike Radar, suggests that vanity may be a major factor; ““vanity” and inconvenience were found to be the two main reasons more than 50 percent of London cyclists are reluctant to wear a helmet.”

Women riders I chatted with at West End’s Kuripla Derby didn’t hesitate in their support for MHL; male riders were ambivalent. Asked what exactly they objected to about MHL some said they wanted choice, with one very balding man adding that he wanted to feel the breeze through his hair. Every parent I spoke with, fathers and mothers alike, said their children had no choice at all; they must wear helmets.

Just after completing this piece on helmets, the issue became a more immediate one for me. A visiting scientist and friend, Tony Ives, who had dined with us that week, took a tumble from his bike on Gladstone Road and was taken to the Mater Hosptial for stitches in his mouth and hands. Fortunately, he has recovered and is back at work, but the dings in his helmet suggest things may not have turned out so well had he not been wearing it.

Tony hails from Wisconsin where helmet wearing is not mandated, but he thinks it should be and always wears a helmet himself. “For my 19th birthday my mother bought me a helmet, and the following summer it probably saved my life (and was destroyed in the processes)” he said. 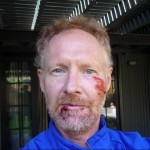 Tony Ives after tumble from bike

There are no moves to make biking helmets mandatory in Wisconsin but the Government website encourages it, saying,

“Every bicyclist wearing a helmet correctly each time they get on a bicycle can help prevent more than 85% of head injuries when crashes do happen.”

Tony said that the really crazy thing is that wearing motorcycle helmets is not mandatory either and there is an unbelievably high mortality rate for motorcyclists in Wisconsin. “But it’s the US,” he said, “live free and die.”