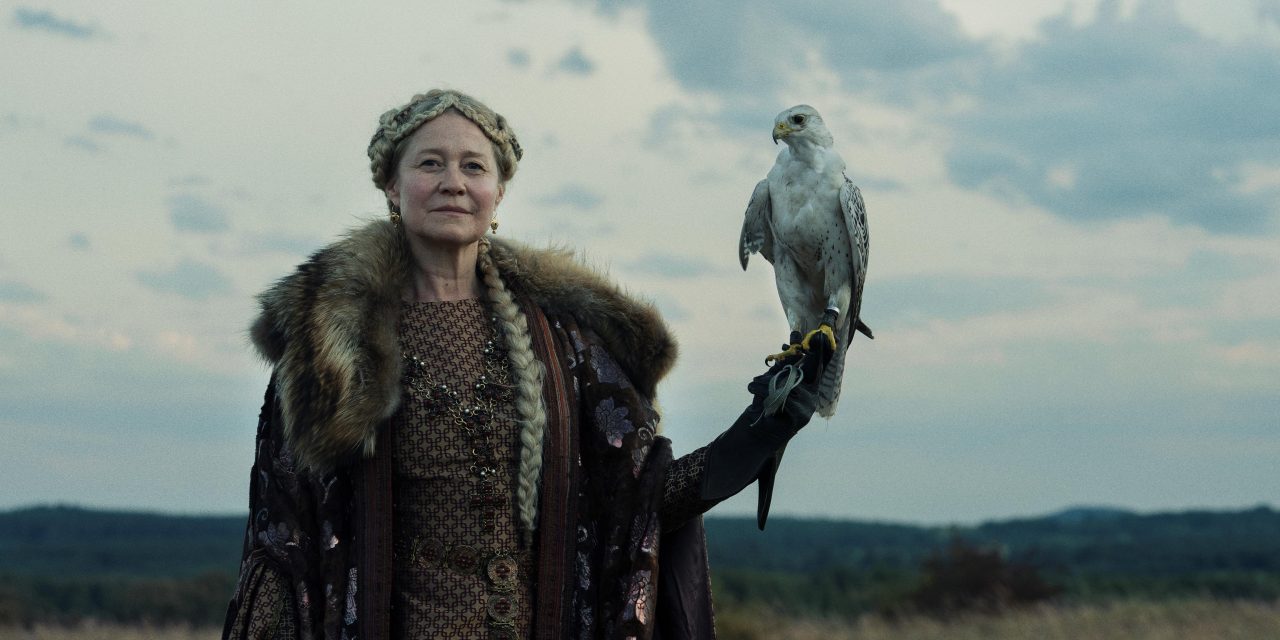 As Ella, my movie-buff friend said when we were chatting about what we might see at the Skandi Film Festival, ‘I love a chilly landscape and folk in fur running and riding about the place with swords’. Throw-away words they may be but I immediately scanned the program to see if in fact any of these attributes might apply. And they do, all of them, shown fully and gloriously in Margrete – Queen of the North (2021), screening at the Festival’s opening night and other sessions.

Here in southern Queensland — given that many of us have forebears, a few generations back, who came from colder climes in northern Europe (Scotland for example) — for some there’s a phantom longing for gadding about on icy ground in furs and knee-boots. Or perhaps just a perverse desire for the opposite of what we have? As Alec Guinness as Prince Feisal is given to say in Lawrence of Arabia: ‘The English have a great hunger for desolate places . . . No Arab loves the desert. We love water and green trees . . . I long for the vanished gardens of Cordoba’. These longings are mostly of the imagination, of dreams, of conquest, of song, of a Robert Bolt film script. In the subtropics when the sun is mild and the days are blue and long, we don’t really want to amble about a dark Nordic wasteland. It’s perfectly agreeable though to indulge our wanton senses on screen. Ella agrees.

Margrete, an epic co-production between Denmark, Sweden, Norway, Iceland, Czech Republic and Poland, is certainly a lavish historical drama skilfully blending grand visuals with psychological unease and exploring the legacy of a visionary ruler together with the sub-story of a missing son, possibly the rightful heir. Many of you will be familiar with Danish director Charlotte Sieling’s other work on The Killing, Unit One, Borgen and The Bridge all produced for Danish/Swedish TV and broadcast world-wide.

Then there’s The Emigrants (2021), also an historical epic but quite different in time and story to Margrete and a fresh version of the original 1971 classic of the same title. From director Erik Poppe it’s based on Vilhelm Moberg’s well-loved story that follows the emigration of a family from Sweden to the United States in the mid-1800s — about the same time the Scots came to Queensland. It stars Lisa Carlehed and Gustav Skarsgård, son of well-known actor Stellan Skarsgård and brother of actor Alexander.

A Matter of Trust (2022) stars Trine Dyrholm who also played the lead in Margrete. In this spellbinding drama directed by Danish director and writer Annette K Olesen (Borgen), on an ordinary late-summer day, the lives of five unrelated people are turned upside down. Based on five short stories adapted and neatly spliced for screen by Olesen and Maren Louise Käehne, A Matter of Trust is a tender portrait of trust in relationships.

From the 2022 Cannes Film Festival Critics’ Week comes The Woodcutter Story (Finland), an idiosyncratic black comedy set in an idyllic village, and via the 2022 Göteborg Film Festival comes a mystery drama, Quake (Iceland) based on a best-selling Icelandic novel about a single mother fighting to keep her young son while trying to piece together her life after losing her memory. It has a fine soundtrack.

In So Damn Easy Going (Sweden, 2022), on the cusp of adulthood and suffering from ADHD, 18-year-old Joanna’s mind is in constant sensory overload requiring regular medication. Amidst the chaos, she meets the charming and confident Audrey and develops a close bond with her classmate; now she has both a bursting mind and heart.