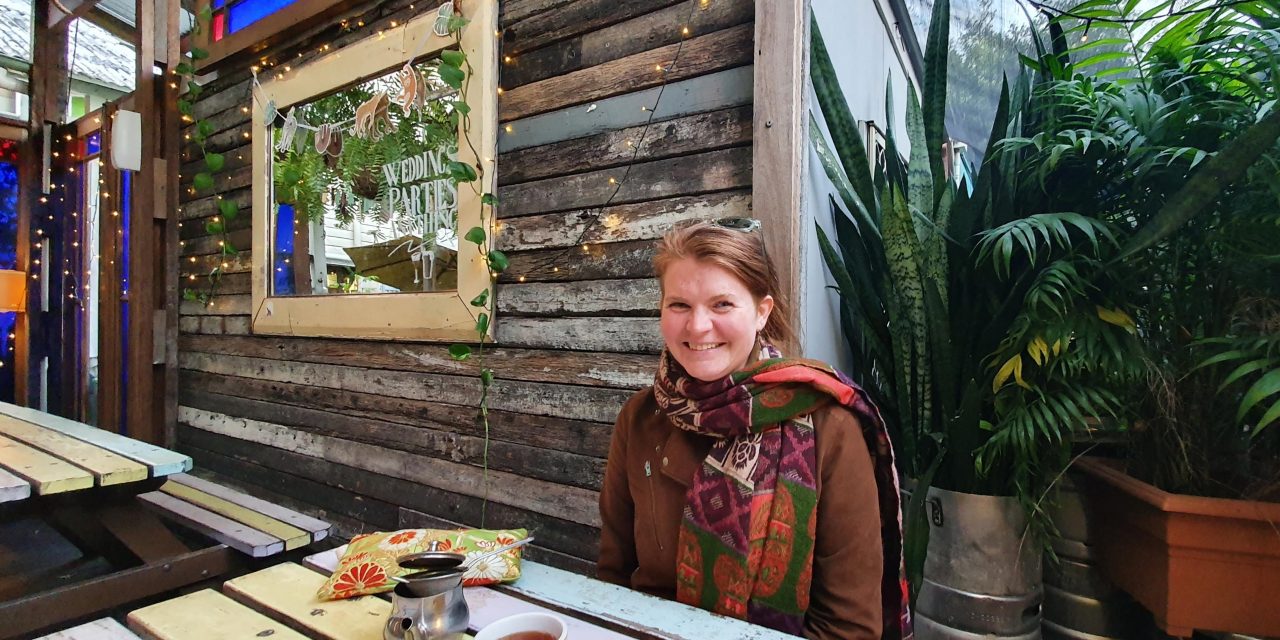 West End filmmaker Christine Schindler honed her craft in China, and if it weren’t for COVID, that’s where she would be now. However, her return to West End has brought rewards for Christine and us, as she turns her lens on our community and its characters.

During a recent conversation, we talked about how Christine came to filmmaking while living in China.

I got into photography in my last year of university, and I just really loved it. I wanted to be a doctor at the time. I was studying biomedical science in my undergrad, but I was just a bit sick of study, and when I got a camera, I just got to talk to people – it was just like a tool to say hello to a lot of people you would never have spoken to.

I met a couple of photographers, so I did a couple of projects with them. And then I went on a trip to China, and I met up with the person who became my teacher – she’s a photojournalist.

Then I heard about this Master of International Multimedia Journalism. At the time, I was just doing photos and not doing much journalism. I realised I didn’t know how to do journalism more ethically – like, “what is representation?” when going into these foreign countries and writing about them. I felt I didn’t know what that meant, and I needed to learn. All the lecturers were practicing freelance journalists and video journalists, photographers. They focused on visual representation in photojournalism, which was really important.

After her course Christine worked in China for four years, with a year in China’s state media. I asked Christine about censorship in China.

I think there’s censorship everywhere, even in Australia. We have freedom of the press, and yes, we have the right to publish whatever we want to say, that doesn’t mean we actually do that. When it comes to major publications, there’re a lot of people pulling the strings. And I think what was nice about working in China, especially in Chinese state media, was it’s very clear who’s in charge. The hierarchical structures are really, really clear in China. You can tell who’s in charge and who’s doing what, whereas I find in Australia it’s much more opaque.

Christine met her partner Nathan Gibson in China, and both came to West End at the beginning of COVID.

We went to Thailand for a holiday because it was Chinese New Year. In China, everything just stops and there’s not a lot of fun, sitting around doing nothing. So, we went to Thailand – it was in that first week of the bushfires. We came to Australia, and then it was COVID.

We thought we’d be back in six weeks. A year later, we’re still in Australia, and it looks like we’ll probably be here for a while.

Christine is now putting down roots here in West End

I feel like West End is definitely my home – it’s kind of like where I found myself.

Since being back in West End, Christine and Nathan have been making films. Notably, their short documentary, Mycelium – An Urban Food Uprising, which won the West End Film Festival’s award for Best Film, WECA Community Award.

The film focuses on movements for creating food resilient neighbourhoods in times of crisis. It features Mel and James from Jane Street Garden; Rudi, who was involved in orchard and verge planting with the support of Misha and Gabe from Jonathan Sri’s office; and the team from Growing Forward.

Most people in this area will have encountered a community garden, but this film is about a movement in response, not just to COVID but also to the bushfires and climate crisis. It’s about looking at food justice and sustainable and resilient food networks within a neighbourhood.

It really is a great little testament to what happened last year and the response to COVID and climate crises in this neighbourhood.

Initially we were just going to make a few short films and document what was happening, but we decided to make a bigger, longer film, and put it into some film festivals. So yeah yesterday (Sunday 19 September), we won best film at the West End film Festival, which is a really big honour. I think it’s a really important prize to win – to be recognised by the community where we made the film and for the community to see the film and recognise it – its reinforcement, encouragement, and support from not just the people in the film, but the wider community. So, it’s great that we’re winning awards; it’s always nice to win stuff.

Christine and Nathan have also submitted the documentary to film events overseas.

Yes, so we’ve put it in maybe 20 to 30 film festivals in total. We’re still waiting on maybe ten or so of them. It’s been selected for eight festivals, four nominations, and two wins.

We just got into a Detroit Better Cities Film Festival. So, one really great thing about getting into these film festivals is not just for us, but it’s also showing ideas, and this one is going to be quite interesting because it is based around urban design and how to build better cities. So, it’s not just about the film; it’s also about the ideas behind the film – people who will go to that festival wanting to learn and share and take information from it.

Another exciting one is the British Documentary Film Festival which was in May this year. Because of COVID, they had an online screening, but there will be a screening at the British Museum next year, which is exciting.

What is it that you think is driving the response to the film – it’s not just the subject matter, it’s the creative process as well? You’re being judged on a range of criteria at these festivals, so putting aside the subject, what was important about the way you crafted the film?

I think it’s challenging to tell stories with a lot of different characters. That was probably the most challenging part about making this film because it’s about a community; it’s about all these different people. Usually, it’s much easier to have one person who leads the story. That’s why we broke Mycelium up into chapters instead of having formal title cards. We made it much more informal; we just used first names to give it more of a community feel. And also, we don’t have these big titles for the ‘expert voice’. It’s just about people doing their thing, and you know you realise how much knowledge they have just by seeing them on-screen rather than being given a title or listing years of experience.

In terms of technique, we didn’t use tripods – almost everything was handheld. We tried to capture moments as they were happening rather than recreating them.

What sorts of stories are you most wanting to tell?

A big influence is a publication that I’ve worked for over the years called 60 Second Docs. It’s just 60 seconds of a character who is an amazing inspiration. I’ve done a few for them. I love finding particular people who are phenomenal in their own space and are inspirational, or are pushing boundaries or changing stereotypes – most of the work I do is very much character-led.

Working in China, I always found that the easiest way to convey something very foreign to an international audience was to find someone everyone could relate to or who they would find interesting to watch – entertaining. Then through that person, you tell the story of the wider space.

What filmmakers have most influenced you?

The way I learned to make films was if you have an idea, you always have to do the research.

One of my lecturers would always say, “If your photo or your story isn’t good enough you need to the research.”

So, it’s really important that every time you do a story, or a topic, to look at what content is out there, what’s been done before, what’s been written on it. You know, just so that you’re not recreating the wheel. When we did Mycelium, we came across a lot of really beautiful films. One of them was called “Dirt“. It was shot in the 1970s or 80s in New York. It was around the community gardens in New York. If you watch it, you’ll see we obviously got inspired by this film, but it’s really beautiful, and it just shows a year in one of the suburbs in New York, and all the community gardens and characters.

Do the films have to be beautiful?

A lot of storytellers or filmmakers or journalists go in and get their story out in the expected way. Whereas I try to go in and to be flexible in finding out the most important thing the community wants to tell.

You do need the skills to tell the story in a way that is representative and reflective of the people or the community rather than of yourself. So, you may have shots in mind, but then you are flexible with what’s happening – we don’t do a lot of directing.

Christine has just embarked on a new venture for The Westender with Westender Docs. I asked her what motivated her to do this.

I just found Australia doesn’t have any of the kind of platforms [overseas media has]. The work of people who live in West End, I think, is really important, so I hope to build more awareness of short documentaries and their power. I think they could have a much bigger impact and build that space within the community. I guess it’s about making more people comfortable with what’s happening around them.

Mycelium is a Film by Christine Schindler and Nathan Gibson. Produced by Misha Ermingerova, Gabriel Reese, and Jonathan Sri. Design elements by MEgan Keene and Anna Carlson. The film was made possible by the support of Jonathan Sri, Councillor for the Gabba Ward and his office.