CO_EX_EN – a story of reconnection with culture 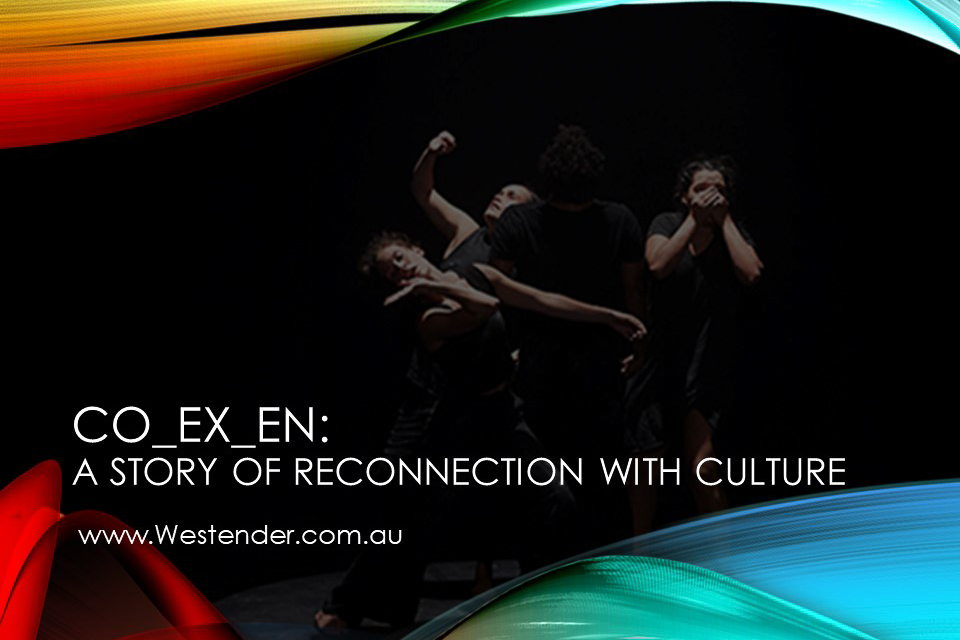 CO_EX_EN continues the Aboriginal tradition of using dance to tell stories. Through traditional and ceremonial dance, Aboriginal peoples bring to life stories about place, identity, and culture and pass on values and knowledge.

CO_EX_EN combines traditional dances and modern expressive dance theatre to tell the story of a site of culture on Bundjalung country, situated in South East Queensland and Northern New South Wales. Bundjalung is the country of origin of Thomas S. Kelly, choreographer, dancer, and producer of CO_EX_EN, and co-founder of the Karul Projects, a promising performing arts company following on the steps of Bangarra. Karul Projects has recently relocated to Brisbane, so watch this space Brisbane!

The story that Kelly and the Karul Projects want to tell with CO_EX_EN is one of disconnect from sites of culture and about the vital importance of reconnecting with them.

The performance opens at the site of culture in Bundjalung. This is represented with neon strings pending from the ceiling over one side of the stage. The strings are lit in green and they symbolise nature. Sounds from nature are composed into melodies. Birds cheeping and running water offer an idyllic background for a sinuous dance. Then a rhythmic music kicks in, starting a ritualistic dance inspired by traditional aboriginal dances. The dancers mark their bodies with ochre, and launch themselves into a dance that will make your body want to follow along.

This opening scene conveys a sense of harmony between nature and culture, which is beautifully captured in the duo dance between Kelly and Taree Sansbury. The two dancers express the harmony of genders: masculinity and femininity breathe together without suffocating each other. Kelly and Sansbury dance in negative spaces, never touching each other, in perfect synchronicity, like the sun and the moon.
Suddenly, a cacophonic sound interrupts the scene, and the five dancers gather under a bright light. They look as if they are in a cage. They start shaking and convulsing at the droning arrhythmic sounds of scratches and clatters. The scene is disturbing, testament to the brilliant expressivity of the dancers.

This highly disturbing dance aptly conveys how colonisation has brought suffering and disrupted cultures. This is what happened to the site of culture in Bundjalung.

As Kelly notes, this “was a place of ceremony and gathering for tribal groups far and wide. […] but the last gathering of family groups to this site is said to have occurred around the early 1900s.”

Many massacres of Aboriginal peoples occurred on Bundjalung Country at Wardell, at the Broadwater, at Seven Mile Beach, at Whites Beach, at Black Head, at South Ballina, at The Pass near Byron Bay, at Kingscliff, at Mount Witherin and at Mudgeeraba.

As suffering tones down, there is a period of adaptation. The dancers move in dysfunctional ways, beating their bodies, moving away from each other, clashing. They wipe off the ochre from their body and they perform a desperate dance at the sound of club music. The neon strings have gone red. The scene is dramatic. The disruption of the site of culture has produced a sense of disconnect from themselves and each other.

Adaptation is a survival mechanism but not a long term strategy for resistance. Resistance involves reconnecting with nature and with culture. CO_EX_EN ends on this note, with the dancers putting ochre back on and performing the ritualistic dance that opened the show.
CO_EX_EN is openly didactic as indicated by the story that it tells through the bodies and movements of the dancers. It also becomes explicitly didactic when Kelly recites, impersonating the ancestors of the site of culture. In his speech, he remarks the importance of culture and of tradition for Aboriginal peoples to come back to their power.

CO_EX_EN is a fantastic production that demands your attention not just because of the beauty of its execution but also because of its politics. Brisbane is looking forward to seeing what else the Karul Projects will offer.

CO_EX_EN was presented by QPAC from 12-15 February