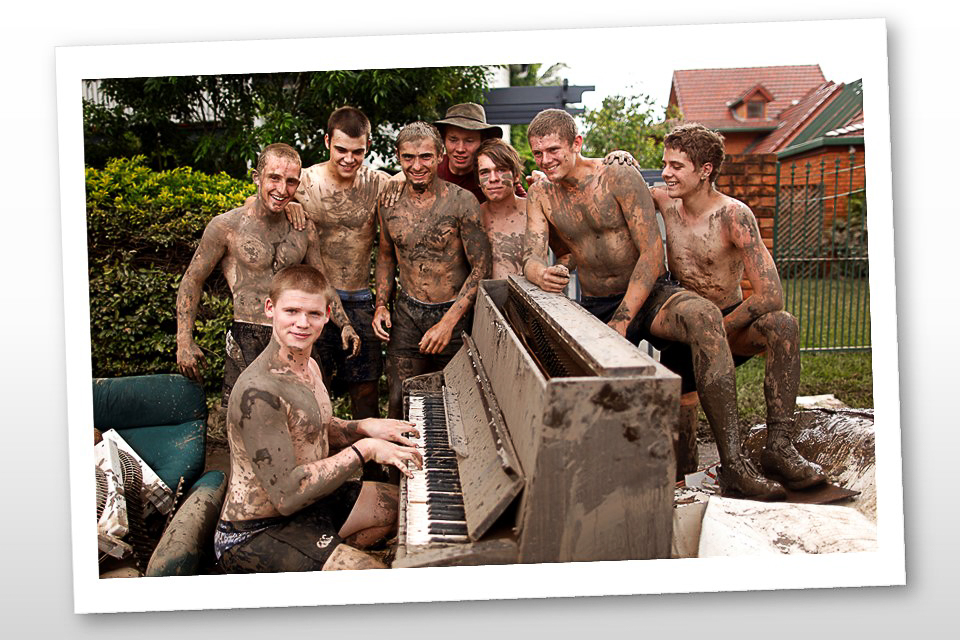 Crises bring out the best and the worst in us. They are opportunities for acts of selflessness or sometimes dark opportunism. These responses are shaped by the social and cultural dynamics of the community in question and the nature, scope and intensity of the crisis.  The way people behave in a crisis can have a lasting effect on the way a community thinks about itself. This month marks the tenth anniversary of 2011 floods, which many of us will remember with mixed emotions.  We will probably remember in particular, the ‘Mud Army’, a spontaneous eruption of altruism, impossible to contrive, and a story which has now been added to Brisbane folklore.  For those of us who took part in, or benefited from, the Mud Army, it might be interesting to look back on this rare phenomenon ten years on.

The disaster was bigger than just Brisbane, unprecedented in its geographical spread and destruction.  Thirty five lives were lost across the State as a direct result of the floods. There were 21 deaths in the Lockyer valley alone when flash flooding obliterated the small town of Grantham.  In terms of property damage, it was one of the worst disasters to befall the state in its history. Damage to property accounted for $2.38 billion with a further contraction in GDP of $30 billion attributed to the floods. Brisbane itself suffered extensive property damage when flood waters rose on 11 January, peaking on the 13th. Eventually the flood would affect 20,000 homes in Brisbane and 3000 in Ipswich, where two lives were lost in low lying suburbs.

One of the (mostly) good news stories of the recovery in greater Brisbane was the way the city as a whole responded to those whose homes and businesses had been damaged or destroyed.  Almost as soon as the waters began to recede, a great wave of volunteers descended on the affected suburbs, armed with shovels, brooms, rubber gloves and high-pressure water cleaners (the holy grail). Some even arrived with earthmoving equipment. At its peak, this wave of volunteers, strangers, reached around 200,000. Although Facebook was well established in Australia by 2011, we were still coming to terms with the power of social media.  The speed with which these strangers arrived to help was testament to the possibilities of this form of social networking.

By now dubbed the ‘Mud Army’ by the media, it took the city by surprise. Although there were eventually attempts to channel and regulate these volunteers, they were free from formal institutional control for the first few days. In flooded neighbourhoods, the normally ordered spatial layout of streets and homes was transformed by mud, debris, vehicles, shouting and music. The Mud Army behaved chaotically; they parked wherever they wanted, roamed the streets half naked covered in mud, disguising normal markers of social status. They dodged trucks and earthmoving equipment and accepted home-prepared food and drink from strangers with little of the suspicion this might ordinarily generate. Many of the volunteers were young and their Facebook walls were covered in curated, muddy selfies using shovels and brooms as props.  The cleanup, aided by hot sunny weather in the aftermath of months of rain, soon took on a festive atmosphere, a celebration of altruism and shared purpose.

Volunteers entered flooded homes and helped occupants remove mud, and clean or dispose of their belongings. While flooded householders were generally grateful for the generosity and invited the army into their homes to help clean up, there were also stories of volunteers taking their temporary freedom to a darker place and ‘taking over’ people’s homes, entering without permission, and even making decisions about which of their possessions to dispose of. For already vulnerable victims, this transgression of their homes, their private realm, first by floodwaters and then by strangers, was traumatic.

Although we could call this phenomenon a good example of ‘community’, it could also be described as more than that. This behaviour, the good and the bad, is a rare contemporary example of a cultural phenomenon, described by the mid-20th century British anthropologist Victor Turner as communitas, a condition where participants enter a liminal or ‘threshold’ space where they are  temporarily free of the constraints of normal social structure imposed by everyday life, expectations, status, and formal institutions.  This gives them with the freedom to behave in ways that reflect a purer form of community and equality using rules created by them in this moment of suspended order.

There is something ‘sacred’ about communitas. The behaviour exhibited during times when people get to make their own rules become an aspirational standard or ideal of behaviour for the future.  This display of reciprocity under stress was put to good use by grateful politicians, exploited by Premier Anna Bligh and Brisbane Lord Mayor Campbell Newman, whose approval ratings reached uncharted highs during the recovery. The Mud Army was used as a cultural touchstone to celebrate the mythical qualities of Queenslanders in a crisis.  Although the actions of the Mud Army violated many of the formal rules of disaster response and risk management, that was really the point. It would not have succeeded otherwise. In retrospect the anarchy was worth it – Lord Mayor Newman boasted that ‘those volunteers saved us millions, absolute millions’.  A statue to honour the Mud Army has been erected in Brisbane.

We should also remember the Mud Army was a feature of the nature of the disaster itself.  In Brisbane at least, the toll from the flood was largely material. There was little of the horror of death, injury and mass displacement of other disasters such as the 2019 bushfires in Australia, Hurricane Katrina in New Orleans in 2005, or the 2004 Indian Ocean Tsunami.  With any of these, the carnival atmosphere would have been absent and the task at hand more overwhelming. Also, Brisbane is an affluent city with relatively high levels trust in our institutions and without the deep social divisions that exist in other places. This also provided with the right conditions to come together with strangers.

But, there remains the fact that when people have the chance to write their own script, free of existing controls and everyday rules of behaviour, and in a spirit of pure altruism, great things can happen, and did.

The author is an urban sociologist who lives in Brisbane and was a participant in the Mud Army.

Peter Walters is a long time resident of 4101. He is an urban sociologist at The University of Queensland and was a member of the Mud Army in West End in 2011.