Record numbers turn out for Invasion Day March in Brisbane 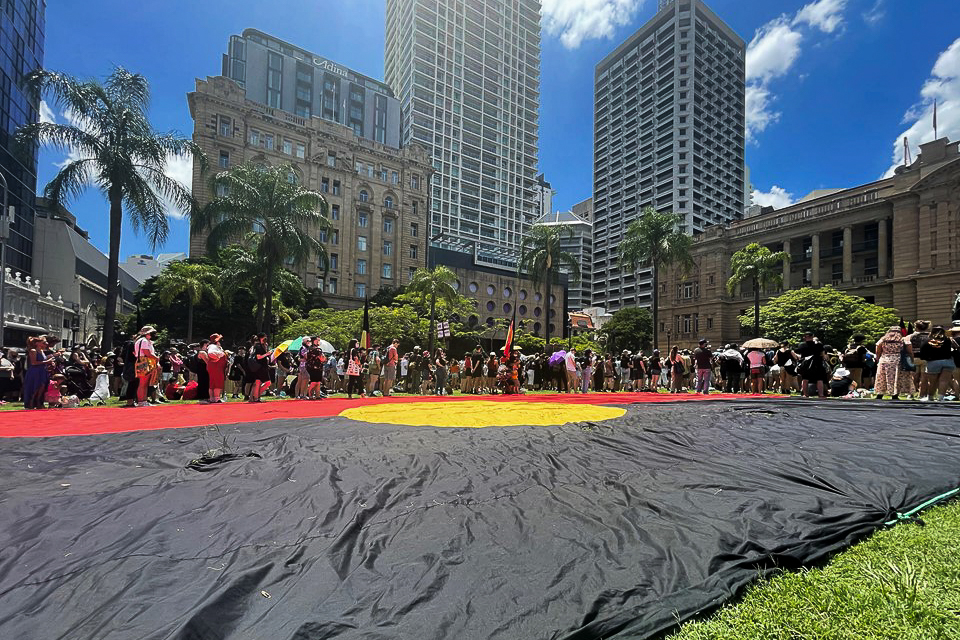 The air was thick with anticipation as thousands of supporters filled Queens Gardens and surrounding streets for the Meanjin/Brisbane Invasion Day rally and march on Tuesday.

In a record-breaking turnout, reports estimate between 5,000 and 8,000 people congregated to hear rallying speeches and participate in a march that would take them across the river and into West End.

Gomeroi Kooma woman and member of Warriors of the Aboriginal Resistance, Ruby Wharton, kicked off a slew of powerful speeches and musical performances with a mighty call to arms.

She urged the crowd to understand the goal was not to change the date of the celebration but to abolish it completely.

“You cannot change the foundation of a nation by changing the date,” she said.

Throughout the course of the rally several elders and leaders of the First Nations community delivered impassioned messages to the assembly.

One such message came from Yugambeh poet and activist, Lionel Fogarty.

“The only way to the truth is through culture.” 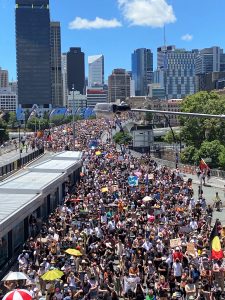 On the other side of the river, a quiet lull had settled over Victoria Bridge as media and a small number of protestors congregated on the overpass above the Cultural Centre busway in South Brisbane.

In the distance, Aboriginal flags flapping in the breeze could be seen approaching from the CBD.

The quiet was broken by the thunderous arrival of thousands of protestors chanting, “always was, always will be, Aboriginal land” and thrusting their signs, flags and fists into the air.

As they began filtering under the overpass, the crowd paused while a dance circle formed across the intersection between Victoria and Melbourne Streets.

With many standing strong beneath the blistering sun, thousands of voices rang through the air, chanting: 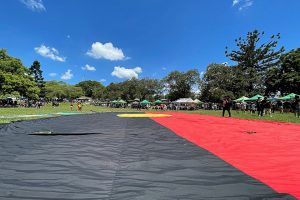 As demonstrators began filtering into West End’s Musgrave Park, a large Aboriginal flag was laid in the centre of the grass to a burst of cheers and applause from the crowd.

Protestors sprawled out across the park to booming music, seeking shade under nearby trees as volunteers handed out water, food, and hand sanitiser.

A series of speeches and dances began shortly afterwards, in a vibrant celebration of culture. 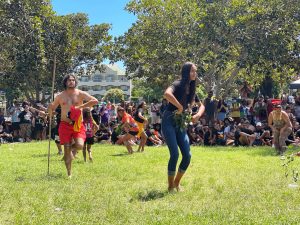 Owner of L.O.R.E.MEN, a social club focused on giving back to First Nations communities and keeping their culture alive, Mark Brimble, said he was pleased with the event.

“It’s getting bigger and better every year,” he said.

“It meant heaps because at the end of the day it’s letting the community, and the Australian public know, that there was some injustice that’s gone on in this country and lets them know that we’re not going anywhere.”

“This here speaks volumes. You can just have a look with your own eyes and see what’s going on, I don’t even have to say anything,” he said.

He said bringing the true history and suffering of First Nations people to the forefront is what the day is all about.

“When they celebrate Australia Day, that’s a sad, sorry day for us,” he explained.

“You know what I mean? Because our people were slaughtered, murdered, raped. A lot of people don’t want to know [the history] but it’s there and it’s not going anywhere. You know, my people have suffered. That’s why we’re all here.” 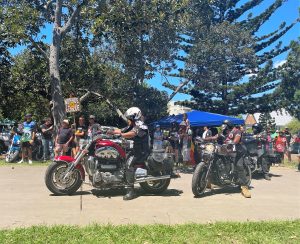 Wiradjuri man and owner of TAKE PRIDE MOVEMENT, Benjamin Thomson said Invasion Day has been a day of mourning for his people since he can remember. For him, changing the date isn’t a solution to the problem.

“Instead of changing the date, we should abolish the date completely and not even have an Australia Day. What’s the pride in celebrating something that doesn’t represent our people?”

“First Nations people have feelings and we’re creating safe spaces. A lot of people ask us about buying our clothing brand: is it for allies? Of course it is. If you see mob on the street and they see you wearing our clothes, you’ve created a safe space for us to come and have a yarn with you,” he said.

“It’s been a really powerful day. I think we’re really blessed with the crowd and the conscious awakening that we’re slowly starting to gain momentum with – not just in Brisbane, but all around Australia. People are starting to be more aware and be more conscious that other people have feelings.”

All images by Jade Macbeth