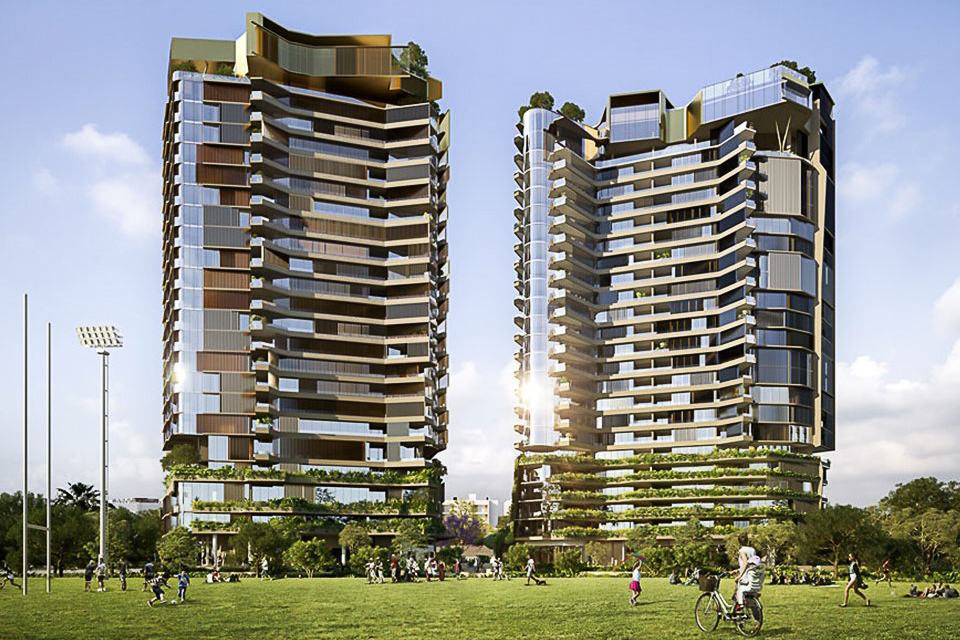 In December 2020, Henroth Investments and Manly Properties submitted a revised development application[1] to Brisbane City Council for two new buildings with 23 levels of residential apartments and a new 4,000m2 public park to be located at 281-297 Montague Road in West End. The site is currently occupied by the Tomra Recycling Centre. 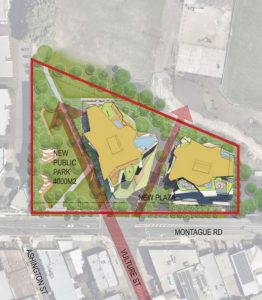 According to the developer a previous application for five smaller buildings which complied with the local planning scheme, did not provide the same community benefits as those in the revised application.

The revised plan seeks approval for additional height, which the developers say will enable the provision of a new 4,000m2 of public park and open space.

Community group Kurilpa Futures has summarised the differences between the existing approval and the new application as follows. 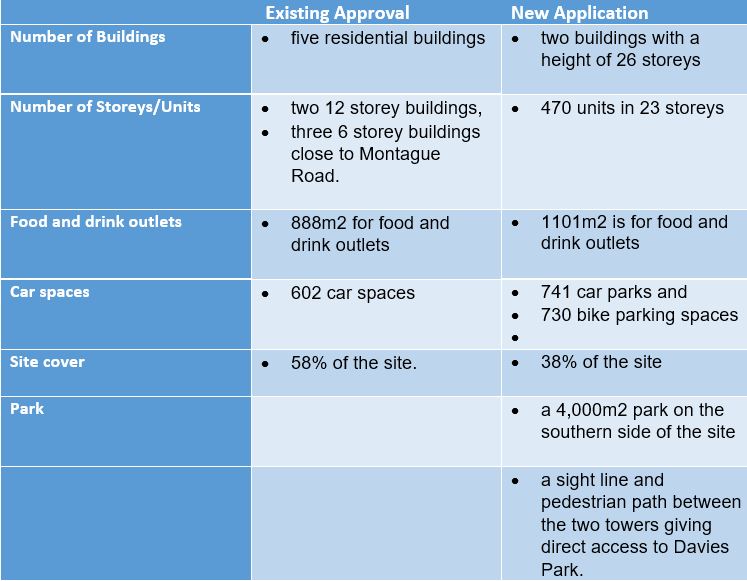 Kurilpa Futures says that the site is 10,628m2. Part of the site is in the High Density Residential (HDR – height limit of 8 storeys) and the Mixed-Use Corridor (height limit 6 storeys). The area falls within the South Brisbane Riverside Neighbourhood Plan which enables 12 storeys in the HDR portion of a site larger than 10,000m2. 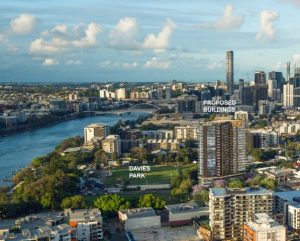 In its report on community engagement, the developer says that the consultation program has allowed Manly Properties to “harmonise its revised scheme with plans to redevelop the Souths Leagues Club precinct.”

“This led the Club’s CEO Jim McClelland to describe Manly’s two-tower plan to be both “outstanding” from its consideration of the Souths plan and “exciting” in its ability to deliver a level of design flexibility it would not otherwise have,” the developer said.

The developer says that West End Traders Association (WETA) and Blue Sky Events (which manages the Davies Park Markets) also support the proposal. They note however, that while community groups West End Community Association (WECA) and Kurilpa Futures have acknowledged the two-tower plan and its potential to provide amenity and access, these groups have queried the development from a number of perspectives. The developer lists their concerns as: the prospect of increased height as a precedent for further development, parking, and increased traffic, shadowing and whether the proposed public access is genuine and sufficient. The developer seeks to address these concerns in its application.

Local Councillor, Jonathan Sri says that the developer is arguing that they should be allowed to build to 26 storeys in an area zoned for 12 storeys in exchange for handing over 4000m2 of the site as public parkland.

“But my view (and I think the view of many residents) is that this site should not be privately redeveloped at all. Instead, BCC should acquire the entire block for public parkland and amalgamate it into Davies Park.”

Cr Sri has advised on Facebook and in his recent newsletter that he will be objecting to the development application, and he is encouraging other residents to view the plans and make a submission.

Cr Sri says that the City Plan specifies that there should be at least 1.4 hectares of public green space for every 1000 residents. In the local area he says, that’s 14 000m2.

“So, although this development is proposing to create 4000m2 of new parkland, that’s not actually enough to meet the needs of the 960+ residents who will live in this new building. It certainly doesn’t help rectify the existing shortage of public parkland throughout the Kurilpa Peninsula.” Cr Sri said.

Rather than just making a submission to Council on the merit of the application, Cr Sri is also advocating that resident demand more of Council.

“… aside from preventing this particular development going ahead, I think we all need to advocate for council to buy this site and turn it into parkland,” Cr Sri said.

West End Community Association (WECA) President, Seleanah More says that the organistion did engage in a preliminary meeting with the developer over a year ago.

“We ceased further discussion as we were concerned it would be taken as tacit approval for development that grossly exceeds the Neighbourhood Plan.”

“We are disappointed that our neighbourhood is in a situation where horse-trading of public airspace giveaways to developers is seen as an effective way to provide essential infrastructure.”

Ms More say that Council has abrogated its responsibility to residents by:

“Part of the development site was in a Park Zone in the South Brisbane Riverside Neighbourhood Plan 2011. In 2014, with the stroke of a pen, Council robbed our community of five parks when they removed them from that plan.”

Ms More said that WECA strongly urges Council to remedy its previous poor planning and to compulsorily acquire the land for an extension to Davies Park.

“We also share the concerns of many Davies Park users about the impact high-density residential towers have on night-time sports, dog activities, and larger events in the park,” Ms More said.

“This approach sets a dangerous precedent for the city. It is another example of undermining the worth of planning laws. What good is a plan if developments rarely comply?”

“As a community (citizens, government, and industry) we have not had a robust discussion about who defines public benefit, the criteria to assess it, its legal framework within the planning scheme, and how any benefits should fit within the suite of public infrastructure provision.”

WECA’s primary concern, Ms More said, is the additional pressure of excessive development on our parks, community facilities including schools and transport networks. 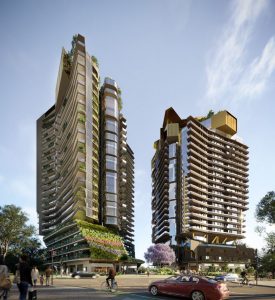 A spokesperson for Kurilpa Futures also says Council should reject the new application.

“The application repeatedly states that the new proposal is only an 8% increase in unit numbers. This is not the central issue. Kurilpa Futures believes that the existing application reflects an approach where the developer would, “stack in as many units as the city plan will permit, without concern for the wellbeing and lifestyle of the residents, or without benefit to the local community”, and with no attempt to achieve high-quality urban design. This approval should not be the benchmark to argue for further density,” the spokesperson said.

“The South Brisbane Riverside Neighbourhood Plan limited development to low and medium density along Vulture Street in recognition of its importance of linking Boundary Street to Davies Park. Kurilpa Futures supports this planning intent. The new proposal will create a high rise building that will be out of context and a physical and visual barrier at the end of Vulture Street rather than a welcoming entrance to Davies Park.”

“It was designated as parkland in a previous City Plan providing a significant extension to Davies Park which is required to meet the needs of the future increases in the population of West End. On the strength of one submission on this site, former Lord Mayor Newman removed the site’s parkland designation. He ignored the need for additional parkland and commitments in former planning schemes.”

“Who is upholding the integrity of our City Plan’s when a site can go from parkland to an overdeveloped site with two 26 storey towers? Surely Council should reject this proposal.” 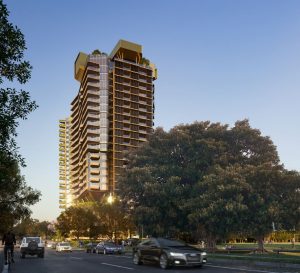 The Henroth Investments and Manly Properties proposal is defined as impact assessable.

Impact assessable applications require a merits-based assessment to determine whether they are appropriate in the zone or not.

A Council officer has advised the Westender that they are still in the initial assessment phase, or information request period for this application.

Council will write to the developer in February with any requests for further information and the developer will have three months to respond to any matters raised. A copy of Council’s letter will be available on the Council’s website HERE.

This impact assessable process allows for members of the community to make submissions in support of, or against, the proposal in the Planning and Environment Court provided they have made submissions during the public notification period.

But as residents in the area know, the right to object does not guarantee that they will be able to influence the outcomes.

Submissions can be made at any time, and some people have already taken that opportunity. Council will note and be informed by submissions, but only those submissions made during the 15-business day notification period will have appeal rights to the Planning and Environment Court.

People can of course make more than one submission if they wish.

All public submissions need to be “properly made”.

Brisbane City Council sets out the process for making submissions in respect to development applications at this page – https://www.brisbane.qld.gov.au/planning-and-building/applying-and-post-approval/have-your-say-on-an-application

[1] The development application for this project, is available to view on Brisbane City Council’s Planning & Development Online – see A005608649.

All images taken from Developers’ Application