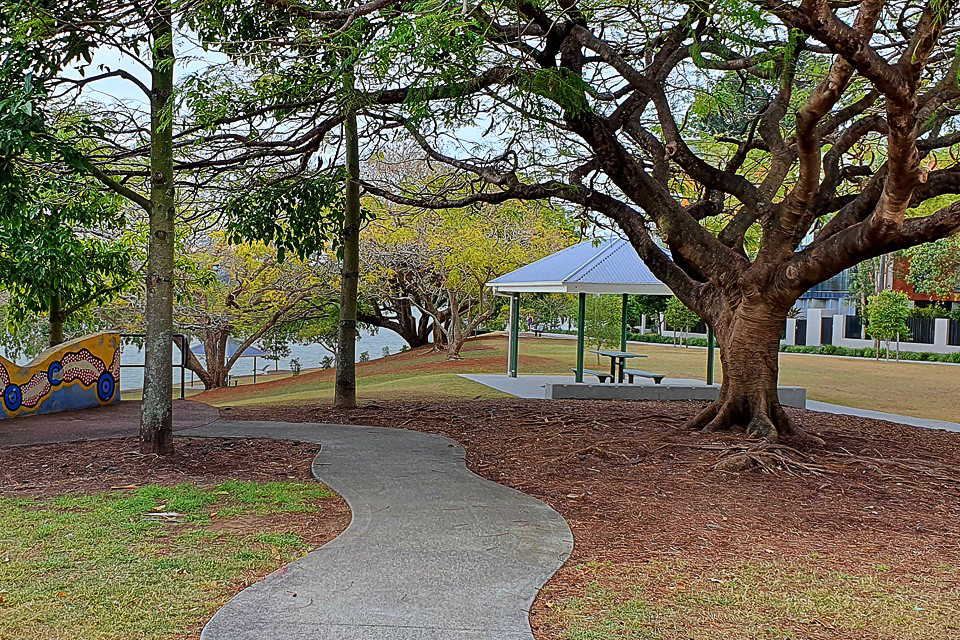 On 28 August, Cr Jonathan Sri wrote to the Lord Mayor about analysis provided to the Gabba Ward office on the distribution of accessible parkland across Brisbane City Council Wards. Cr Sri said that the study, which uses the Council’s own publicly available data, found that the ratio of greenspace to population is comparatively low in both The Gabba and in Central Wards. 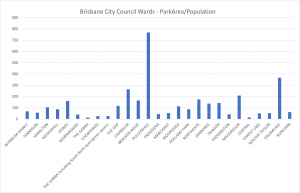 Chart based on data provided by The Gabba Ward office

In his correspondence, Cr Sri asked the Lord Mayor to meet with him to discuss how Brisbane City Council plans to allocate funding for new greenspace in the Gabba Ward.

Cr Sri noted in his letter and in conversation with the Westender that:

“Based on Council’s own data, the Gabba Ward has a ratio of 12.75m2 of parkland per resident. Central Ward has 13.76m2 parkland per resident. Importantly, these wards also host much larger numbers of workers than other Brisbane wards, so there’s even more demand on public green space than there is in predominantly residential neighbourhoods,” Cr Sri wrote.

“They are living in much smaller, more contained residences, with more light and noise. They’re also potentially exposed to lower air quality and higher temperatures due to the heat island effect.”

Cr Sri is yet to receive a response from the Mayor, but a Council spokesman provided the following advice to The Westender.

“Council does everything it can to ensure all residents have access to quality parkland.”

Council also said that the figures Cr Sri has provided, “… are selective and do not include, for example, South Bank parkland into the calculation for The Gabba ward. Similarly, Roma Street Parklands should be included for Central ward. Both these parklands are useable public parkland provided for residents and it is appropriate to include them in the parkland area calculation.”

However, Cr Sri does note in his letter to the Lord Mayor, that he listed calculations that both include and exclude the South Bank green spaces.

“Obviously, my contention is that the busy green spaces at South Bank do not play the same role as local council parkland, and should not be counted when evaluating the availability of local public parkland. However, even when you include South Bank, it’s clear that Central Ward and the Gabba Ward are both very very low on public green space,” Cr Sri wrote to the Lord Mayor.

Cr Sri also said that the inner-city parks such as Roma Street and the City Botanic Gardens, and even Davies Park in West End, play a different role to local parks.

“They are essentially metropolitan destination parks that cater to the entire southeast Queensland region… they play a different role to quieter local greenspaces.”

Council said that the Local Government Infrastructure Plan, which expresses Council’s intentions for future expansion of and upgrades to the park network includes a more than $65 million investment in The Gabba ward, “…which is the second-highest total investment of any ward in Brisbane,” the Council spokesman said.

“It is all well and good to see that Council has a plan for future spending, but we need to see that now, not in ten years’ time when land prices are much higher.”

“I think it is crucial to recognise that what we’re seeing at the moment is just a foretaste of what’s on the horizon. The State Government and Brisbane City Council are proposing that the Gabba Ward is going to grow in population from 45,000 residents to 90,000 residents. That doubling in population is going to have a huge impact on the area, particularly if there’s no new public parkland,” Cr Sri said.

The Council spokesman acknowledged that the inner-city does not have as many opportunities for parkland suburbs further out, but said, “…we do everything we can to strike a balance and ensure residents have access to parklands.”

Local State Member Jackie Trad said that she recognises the impact of population growth in the Gabba Ward and South Brisbane.

“…we know that our electorate is growing rapidly, with our population is set to double by 2031.”

“I know that green space is a critical and hard-fought issue for our community. I’ve witnessed firsthand how hard former Councillor Helen Abrahams worked to secure the Thomas St pocket park (now Bunyapa Park) for community use, and together we worked hard on securing the Gabba Hill Community Garden”.

Ms Trad said that she is proud that in her last term as the local member for the South Brisbane electorate, she was able to turn over more parcels of green space to the community – including one in South Bank, two in Woolloongabba and one in West End.

“It is, and has been, a joy to watch these spaces grow: from the ever-popular new spaces down at South Bank which are enjoyed by locals and the wider Brisbane community; the Gabba Hill Community Garden at Woolloongabba which has grown up adjacent to the M1 – a pocket park oasis complete with solar irrigation and a pizza oven; and Queen Bess park at Woolloongabba. I have been proud on a number of occasions in my time as local member to work with the community to ensure that the state land could be retained for community benefit, rather than sold off.

“I am focussed on the long-term planning this community needs to ensure green space keeps up with development and density, but it’s also so important that we have a collaborative approach from different levels of government to ensure we achieve this,” Ms Trad said.

Local community group, Kurilpa Futures has been lobbying both Cr Sri and Ms Trad for additional greenspace in the West End neighbourhood. The group wrote in its 2019 report, Toward an Integrated Planning Strategy for the Kurilpa Peninsula that:

“South Brisbane Riverside Neighbourhood Plan area has become one of Brisbane’s most densely populated neighbourhoods. While population numbers have grown rapidly, there exists a distinct lack in diversity of land use, supportive infrastructure, services and greenspace.”

The group says that they would like to see a master plan developed for the industrial lands on Kurilpa Point that allow for a minimum of 50% to be developed for community purposes.

“Even this would not meet Council’s own guidelines for the provision of public parkland,” Kurilpa Futures spokesperson, Peter Griffin said.

Sources used by the Gabba Ward.