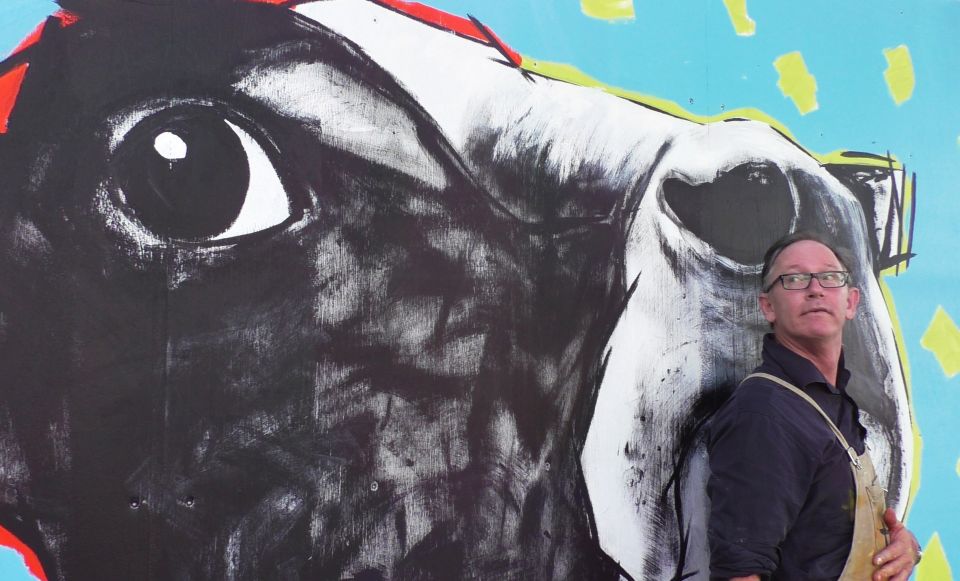 Hoardings around construction sites have habitually been cold, austere, unfriendly edifices, designed to keep the community out emotionally as well as physically.

By contrast — an example of how West End does things differently — inquisitive cows, cheeky crocodiles and perky birds are among the sketchy fauna that engage the local community from the boundary of the West Village site.

Former guerrilla stencil artist Stewart Shuker has been commissioned to enliven the development’s high-profile Boundary Street frontage with a mural that both welcomes the community and reflects its quirky character.

The daubed menagerie will change continually over the six weeks of site preparation works for the landmark mixed use development.

To Stewart, the approach makes sense: West Village is being designed as a destination for Brisbane, a meeting place for people, with residences, shops and open spaces revitalising a industrial warehouse precinct.

“I have chosen the subjects and style to be appealing, engaging, intriguing, without being confrontational,” Stewart said.

“I picked animals that people would identify with, and painted them so they looked like they were a part of the life of the street, so that people walking past would have a connection with them.

“It’s the eyes that engage people, and that’s why they are all looking at you.

“I also wanted it to look organic, which is why I have done them a bit like smudgy charcoal drawings, and I have used a subdued palette so they contribute to, but don’t dominate, the street.

“And the ever-changing line up keeps people interested. As I run out of space, I paint a new character over one of the others – normally the one I don’t like so much as the others.”

This is the first public commission for this self-taught street artist, and one that began life as something quite different.

“This all started when I approached the site owner last year to see whether the street art community could use the buildings for their works before they were knocked down,” Stewart said.

“But the owner had a better idea – bringing the art into the public domain where it could be enjoyed by everyone.”

The conspicuous work certainly appears to be fulfilling the goal of engaging people.

“It’s fascinating being on the street,” Stewart said.

“It’s the same people walking past every day, and after a few days, many of them stop and say hello, ask me about the art, and tell me what they think of it and also the development.

“Most of them are very positive, although one lady stopped and abused me and a couple of local larrikins have offered some unhelpful suggestions.

The project is something of a ‘horizon stretcher’ for Stewart, the latest chapter in a career as meandering and eclectic as the mural itself (he has previously held roles as Government hydrographer, police officer, outdoor education officer and a doctor’s surgery manager).

“This has been a great opportunity for me. I haven’t painted anything of this scale with acrylic paint before apart from houses,” he said.

“So my painting style has developed — from s**t-scared to confident and actually having fun. Now I don’t think about how it will turn out when I start…I just let it take me on a journey.”

Construction has commenced on Stage 1 of West Village which received planning approval from Brisbane City Council in March 2016.