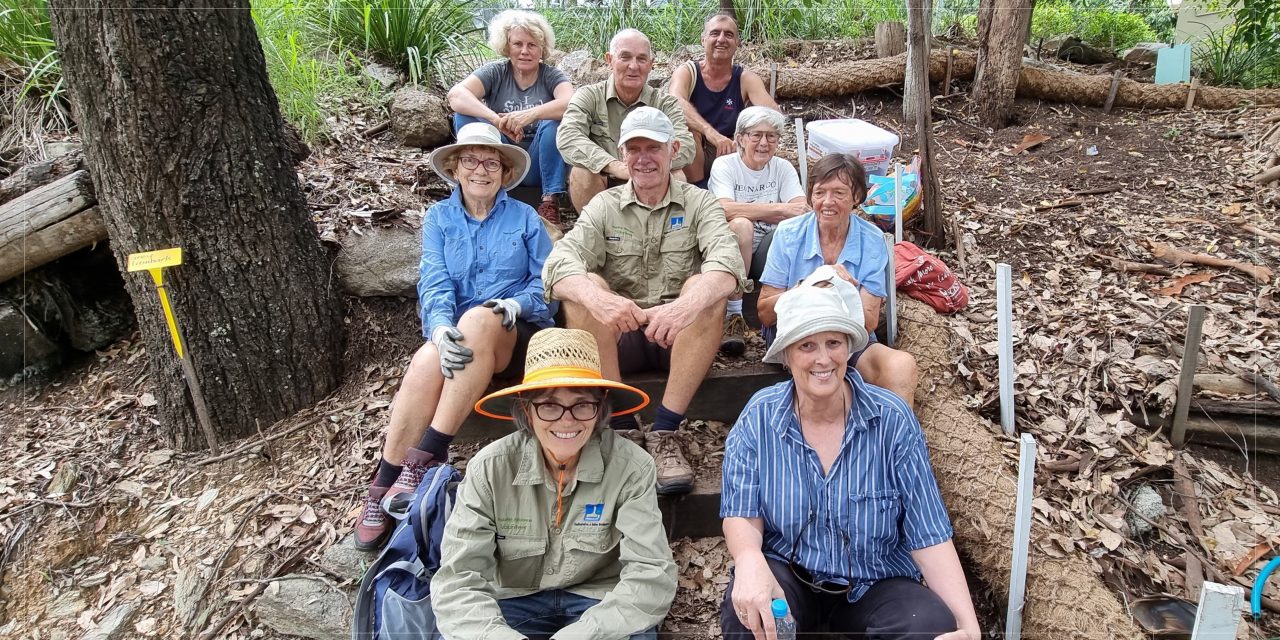 I felt a bit shame faced as I inched my way down the steep slope of the Dauphin Terrace Park to meet the busy greening group on the banks of the river – after all, they are all at least my age, some much older, and they have been doing this for 25 years.

It is certainly worth the effort. Dauphin Terrace Park provides a “glimpse”, as Landscape Architect, John Mongard[i] says, of the forest that once dominated the ridge country on the Kurilpa peninsula.

The aim of the Dauphin Terrace Bushcare Group has been to manage and restore this remnant forest.

I scrabbled after Sarah Lejeune, one of the founding members along with David McDonald, as she described her 25-year labour of love.

“We started in July ‘95. We had an open day. And then we had a training workshop and then we started doing work in about August or September ‘95.”

Sarah recounts how the group started with just a few locals linked to Greening Australia, which was based in West End at the time.

Sarah describes the site as dry sclerophyll forest which is typically eucalypts, wattles and banksias  grasses, and some dry rainforest plants associated with low soil fertility. This is unique from the subtropical gullies seen in other areas across the Kurilpa Peninsula.

When the group began, the site was quite well treed but with a lot of rubbish and an understory of mainly weeds. Now Sarah says there is a healthy layer of trees and shrubs, and many native seedlings emerging.

Regeneration is slow work however, and the site does not have much understory yet.

“We need more understory because we’re trying to bring back birds such as fairy-wrens, the eastern whipbird, pheasant coucal, that need thick understory.

Sarah says that over the years the group has learned that you need to slowly remove weeds, as they provide habitat and hold soil, preventing erosion.

A couple of sections of the bank have disappeared over the years, and Sarah says the group has also learned to focus on erosion control, using any barriers to hand, such as logs, and branches.

People can also create erosion problems, and in June 2021, some mountain bikers attempted to create a track through the site, prompting Councillor Jonathan Sri to make this Facebook post.

“They destroyed a whole lot of native grass. They just flattened them,” Sarah said.

Council habitat groups are resourced with advice and plants, water and watering equipment.

Aims for the future

Sarah said the group would like to see more connectivity in this area between the green open spaces found along the river, and greater awareness of improving habitat.

Sarah said she would also like to see the development and promotion of a river walk, and a coordinated approach across West End to improve access to the river and improve the amenity and condition of other sites.

“Informally we do these things, but we need to consult with local neighbours and get more resources.”

With the Olympics coming in 2032, Sarah said now is the time to argue for more resources, and to create an eco-walk from the city around West End and into Dutton Park.

Sarah says there is a core of about ten volunteers in the group.

“What’s been really good over the last 25 years is that some people who, used to come years ago like maybe 20 years ago, are now involved with other local groups. So, I suppose people who’ve come have continued their interest.”

Sarah said everyone has learned on the job.

“People don’t have particular expertise. They just need to be interested and willing to learn and there’s enough knowledge within the group. You can team them up with someone. You probably need to work out what the six main weeds are, and target those so that you don’t start pulling out a native accidentally.”

Sarah said people are more likely to get involved and stay involved when it’s easy to get there – so living locally and being part of the community helps.

Involvement in the group provides both social connection and physical exercise, as well as providing a sense of having done something good for the natural world.

As one of the volunteers told me, “every time someone plants a tree they feel connected to the environment.”

“One of the underlying issues local communities have started to realise, is that their sanity depends on nature.”

“It’s an incredible feeling coming down and seeing the river and being part of this connection with plants.”