Do you live locally? Briefly outline your history in the Ward.

Yes! I’ve lived in Kangaroo Point for a number of years now, but, as former national water polo champion, I began playing for Queensland at West End’s Musgrave Park Pool in 2000. I also started uni studying a Diploma in Liberal Arts at the University of New England’s Shafston Institute of Technology back in 2004. Playing a key part in planning and operations for the 2014 G20 Leaders’ Summit, I’ve also helped showcase not just some of the great aspects of our city but helped put our wonderful South Bank Precinct on the world stage. 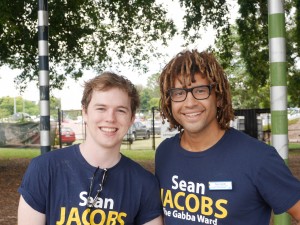 In what ways do the policies and principles promoted by Liberal National Party best represent your personal values?

As an LNP member I’ve always strongly believed in the power of the individual to think, to speak, to choose, to be ambitious, to be independent, to be industrious, to build skills and to seek rewards. The Liberal Party’s founder Robert Menzies famously said that ‘these are all individual matters. There is no Government department which can create these things.’ As a core part of Team Quirk I’m proud that, from delivering first class public transport to keeping Brisbane Australia’s most sustainable city, we’re creating the local settings for not just individuals but families, businesses and communities to prosper in our great city.

I’m genuinely interested in hearing different points of view, listening to the concerns of Gabba Ward residents and doing my best to fix local problems. Having worked at all levels of government I have a good appreciation for the most effective ways to respond to people’s concerns. Working for the United Nations and in international development has also required producing outcomes for people in some pretty challenging environments, especially in places like Papua New Guinea. I feel these experiences are more than useful for standing up and being a highly effective representative at the local level.

I sense that most people in the Ward love where they live and are interested in ensuring they have opportunities and choice in the coming years. People fully appreciate that Brisbane is growing for the better and that we need a good team in City Hall to keep Brisbane on track and in safe hands. This means maintaining our first class public transport fleet, fantastic greenspaces like Orleigh Park and Kangaroo Point Cliffs Park, building our economy and balancing the budget, taking action on traffic congestion, keeping Brisbane Australia’s most sustainable city and building better and smoother suburban streets. Team Quirk not only has a great track record in all these respects but a reliable vision for the years ahead.

Should Brisbane aspire to be “a new world city”, and if so, how do you envisage that taking shape in The Gabba Ward?

Having worked internationally for a number of years I have a fundamental appreciation for how competitive cities are becoming. It’s critical that Brisbane continues to head in the right direction, and is open and flexible to change and new ideas. We have to overcome the attitude of ‘oppose everything propose nothing’ if the Gabba Ward is to remain on track to be a part of a new world city, which means a future of urban renewal, a place that welcomes international students, investment, tourism, digital connectivity and major events. The Ward is already a standout performer not just in terms of hosting big events like the G20 but having a truly impressive South Bank Precinct, which hosts hundreds of thousands of visitors each year.

All donations made to Team Quirk are declared in accordance with all requirements of the Electoral Act and relevant disclosure laws.

What will your priorities be for 2016, if elected?

Team Quirk is delivering the roads and transport we need, the parks and green space we want and the reliable services we deserve – all within a balanced budget as part of a reliable vision for the years ahead.

Over the coming weeks, I’ll be announcing my plans for the Gabba Ward. In the meantime, residents can be assured that, if I am elected, they will have a local representative who stands up for the Gabba Ward and works with other members of Team Quirk to ensure our community continues to thrive.