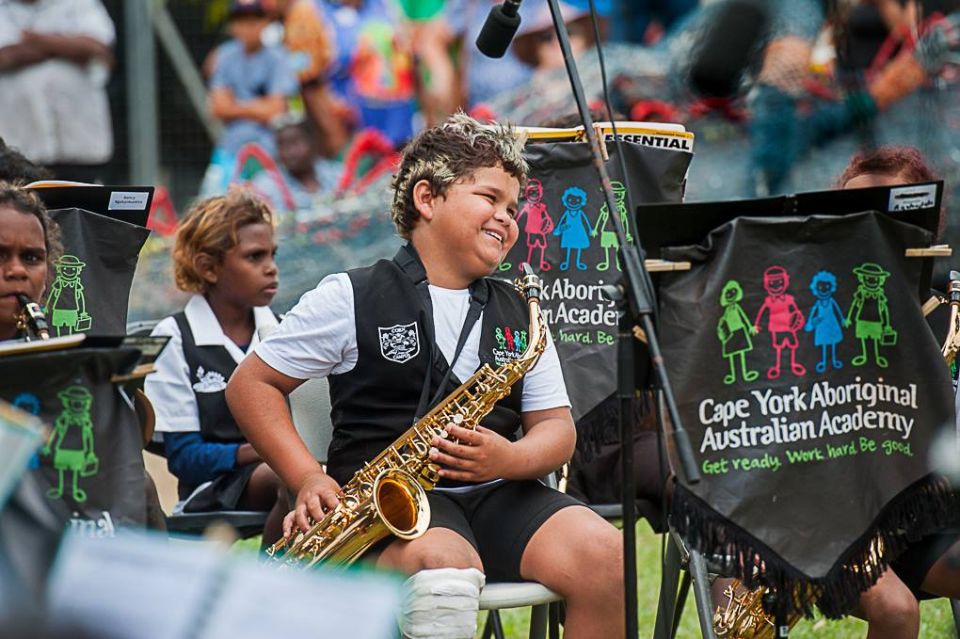 Ms Noonan used the announcement to call for Queenslanders to learn to sing, to use the power of music as a healing force for positive change, and to reach out to people who are isolated, whether socially or geographically, across the state.

“I want the talented and passionate people of Queensland to be empowered to join the 2017 festival and help create performances that truly reflect the life of our diverse and vibrant state,” Ms Noonan said.

Queensland Premier and Minister for the Arts Annastacia Palaszczuk said QMF 2017 would bring over 100 performances to 45 cities, towns and remote regions over three weeks.

“Queensland Music Festival will also give a voice to those who want to unite against domestic violence, towns who face hardship, our remote Indigenous communities, women and young people struggling to get a break in the music industry, and making high-quality live music accessible for our elderly in aged-care centres.”

Katie Noonan, a passionate advocate for social justice, feminism and homegrown Queensland talent, said QMF was unlike any other music festival in the world in its vast geographic reach and the way it transforms lives through community projects that run for years and sometimes decades.

“I learnt about the world, its politics and its people through music, and I passionately believe in its power to educate and inspire,” Ms Noonan said.

“Since QMF started 18 years ago, it has reached more than a million people through projects in 82 regions. In 2017 we will continue this amazing legacy and we encourage all Queenslanders to hear and be heard this July. If you can talk, you can sing.”

The Power Within is the result of an 18-month project with six towns in Central Queensland, which have lived through the mining boom and bust, drought and flood. The colossal project in partnership with Isaac Regional Council will culminate in a world premiere musical spectacular in Moranbah, starring 200 people from the community and celebrating resilience and unity, on Friday 28 and Saturday 29 July.

Songs That Made Me is a project offering mentorships with artists including Deborah Conway, Clare Bowditch and Hannah Macklin for several emerging female singer-songwriters in Mount Isa, Mackay and Gladstone. The project will see all the mentees perform in their hometowns with the celebrity mentors, and a special finale concert celebrating women in music will be held at the Tivoli on Sunday 16 July.

On Song is a touring program for six regional and rural school kids to learn from the amazing, award-winning singer-songwriter Jack Carty, and two will be selected to perform with him in Brisbane as part of QPAC’s Green Jam program on Friday 28 July.

Silver Memories will harness the healing power of music in a series of intimate concerts of classical and jazz music, performed by Queensland Conservatorium ensembles, at aged-care centres in Brisbane, Toowoomba and the Sunshine Coast.

Ensuring QMF reaches some of the most isolated corners of the state, the Bach to Bush tour will see percussionist John Morrison hop into the pilot’s seat to fly virtuoso cellist Louise King to nine Western Queensland towns for joint performances, workshops and masterclasses from Thursday 13 to Sunday 23 July.

QMF will also feature many performances resulting from its ongoing Indigenous programs. From Wednesday 12 to Sunday 16 July, school bands from Aurukun, Coen and Hope Vale will come together for an intensive band camp before showing off their skills at the Cairns Indigenous Art Fair. Internationally renowned musician Tjupurru will work with students to create inventive songs and soundscapes for The Didjeribone Show, which will tour Queensland schools. And Jessie Lloyd will present Mission Songs, a rare collection of Indigenous songs spanning the 20th century.

Other major regional events include the ever-popular Opera at Jimbour in the Western Downs on Saturday 22 July and Currie Street Music Crawl, a free music festival in Nambour showcasing local established and emerging musicians on Saturday 8 July.

But it’s not all about the regions – Brisbane will be hosting some incredible ticketed and free events, including world premieres.

Sanctuary, presented in partnership with Camerata, will feature a new commission, composed by Joe Chindamo, featuring Diana Doherty and Alexandre Oguey, as well as showcase several new compositions and renowned guest artists, exploring the universal need for a safe haven in a troubled world, on Thursday 13 July.

The stunning new hotel The Johnson will become a hotspot for 10 nights for Immersion – a series of boutique, multi-genre musical performances by QMF stars including Montaigne, Robbie Miller, and Deborah Conway with Willy Zygier – limited to just 20 audience members per event.

Twilight in the Red Box will present intimate instrumental and vocal performances by students of the UQ School of Music at the State Library of Queensland on Sunday 9, Sunday 16 and Sunday 23 July.

Many more events include the culmination of QMF’s long-running film scoring competition for school students Score IT!, including a lecture by Hollywood composer Cameron Patrick on Friday 28 July, the popular three-day Stradbroke Chamber Music Festival and the Australian premiere of Samuel Beckett’s radio play Words and Music.

The Jazz Music Institute will present JMI Up Late Series and JMI New Orleans Street Parade, while the Southern Cross Soloists will take you on a musical Journey Along the Silk Road. Further, there is the double-concert To the Earth / To the Sky held at the Spring Hill Reservoir and the Sir Thomas Brisbane Planetarium, and award-winning virtuosi Sitkovetsky Trio.

For those looking for something experimental, QMF will host Aurality, an augmented reality audio project, and Super Conductor and The Big Game Orchestra, an interactive video game with a live orchestra playing sound and video effects.

Katie Noonan said this year’s festival spanned many musical genres, with shows for the young and old and everyone in between, to stir the emotions.

“You will laugh, cry, be wowed, informed and educated. You will be inspired, your eyes will be opened and your heart will be filled. You will have the opportunity to unite with your community and use your voice to make a difference,” Ms Noonan said.

“This is a festival for all Queenslanders, so I urge you to hear and be heard.”

For more information and to book visit qmf.org.au