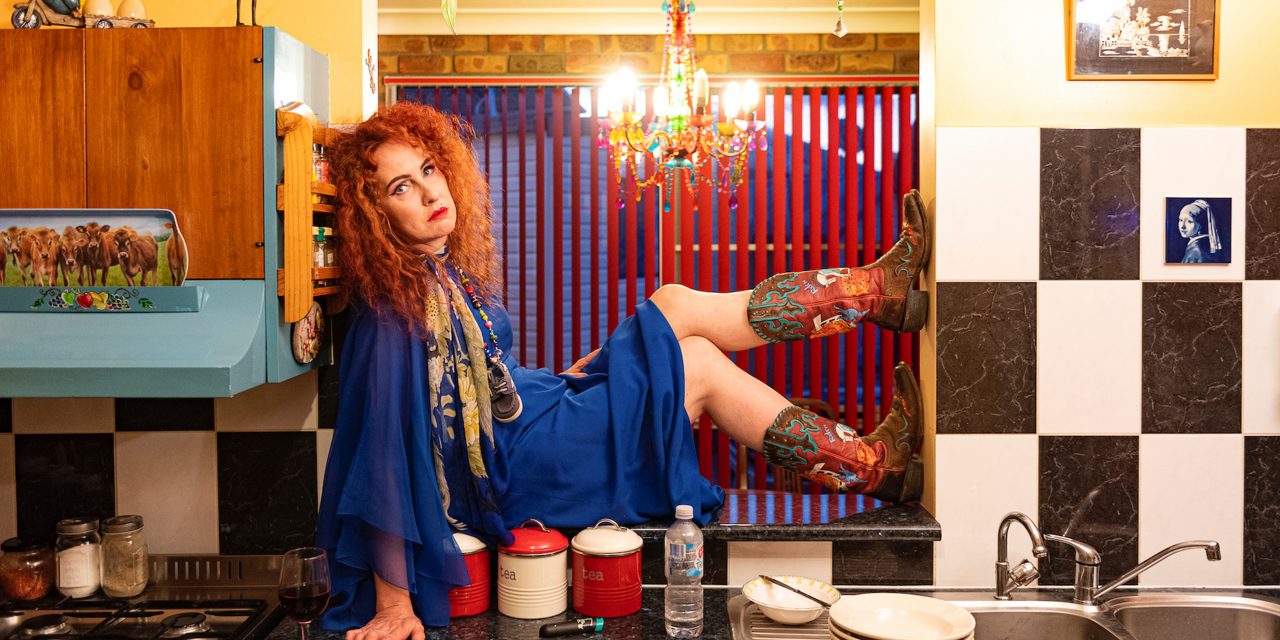 Wanita Bahtiyar grew up on Yorta Yorta country, listening to Loretta Lynn and Hank Williams and dreaming of singing at the Grand Ole Opry. Made over five years, I’M WANITA is the story of a chaotic, flamboyant force of nature and her lifelong odyssey to realise her childhood dream – sometimes at the cost of those dearest to her. Read Richard Meyers’ review below.

I’m Wanita is a well-paced documentary about an Australian honky-tonk artist trying to make a name for herself after a lifetime of struggle. It opens with striking shots of her in a bright blue dress with bold, curly and untamed red hair walking through the dry Australian landscape. That pretty much sums up Wanita – bright and colourful and a standout character.

She’s a strange conflict of personalities: crass and crude yet loving and caring, self-assured and bombastic yet self-demeaning and extremely hard on herself. So, to sum her up, I’d call her perfectly Australian.

But she’s a big dreamer, and that shines through in the production of the documentary with a beautiful soft opening that is wistful and invokes a feeling of nostalgia as she relives her youth. And a bit of rough adolescence it was from the looks of it, but, from when she was old enough to understand music and musicians, she dreamed of becoming one. As such, one of the main themes of this documentary, and indeed of her whole life, is dreaming, and dreaming big at that.

From the first instance of her singing, it’s clear she has always had a beautiful voice that suits the laid back yet hard-life mood that is pervasive in most country music. Her estranged daughter describes her as spending so much time with her dreams – she lives in them, and her identity is connected to her music.

Wanita describes herself as living in the wrong era, and the style of music she writes is also from the wrong era, with a rare blend of 50’s honky-tonk and modern western country, packed full of bluesy sorrow.

Her relationship with her daughter reflects many aspects of her life, both her strengths and her flaws. Admittedly, she can sometimes put her life and her music before others in her life, which would have been hard for a lone daughter of a single mother.

After hitting herself and calling herself names when she didn’t get notes right with her voice or instrument, Wanita was taken for psychiatric analysis and diagnosed with autism. The condition impacted her life significantly, and she admits that she can sometimes be hard to live with. Yet, in true Wanita fashion, she turned this into strength and seeks to help strangers, stragglers and vagabonds, who have also been dealt a hard hand by life.

Through the help of her friends Gleny and Archer, she’s now having a real go of it. She is trying to get her name out there and achieve the dream of the stardom she always knew was her destiny. It’s clear that this support motivates her to keep chasing and fighting for her dreams and is a tangible reminder of how helpful and impactful friendship and support can be so our lives.

That support wasn’t always there for her and even her school teacher commented that despite how lovable Wanita was, no one wanted to help her achieve her dreams or even do the things she loved. Furthermore, her husband is critical of the lack of income her music has brought – not to mention all her distractions like partying, drinking and even helping the people she meets out and about.

This leads to another aspect of Wanita, one that is heart-warming as much as it is heart-breaking – she gets distracted incredibly easily. Gleny summed it up best when she said, ‘Her heart is in the right place, but her mind is in a million places at once. Wanita is like a tornado of chaos, but at the same time, she brings so much love, kindness and generosity into other people’s lives – it can be seen on their grinning faces whenever she interacts with someone. She understands, possibly better than anyone, the plight and mindset of the everyman.

Those around her have called her a ‘renegade’. They have described her life as a reverse fairytale, where she started as a queen – looking like she was going to be a big hit when she was younger – and then it reverts to this wild child from the country. Her brash and outlandish personality, combined with her excessive drinking, can strain her friendships.

That is simply Wanita: wild, untamable, but undeniably lovable. She’s an absolute character that’ll make you laugh, cringe and cry, sometimes all three at once. However, now she’s making a break for it, a real break for it. Despite her wandering attention and drunken shenanigans, she’s on her way to Memphis, New Orleans and Nashville for one last shot at reaching her dreams.

Don’t mind the swearing and enjoy the ride.