Filming on the Fringe – West End’s time with Wendy Rogers 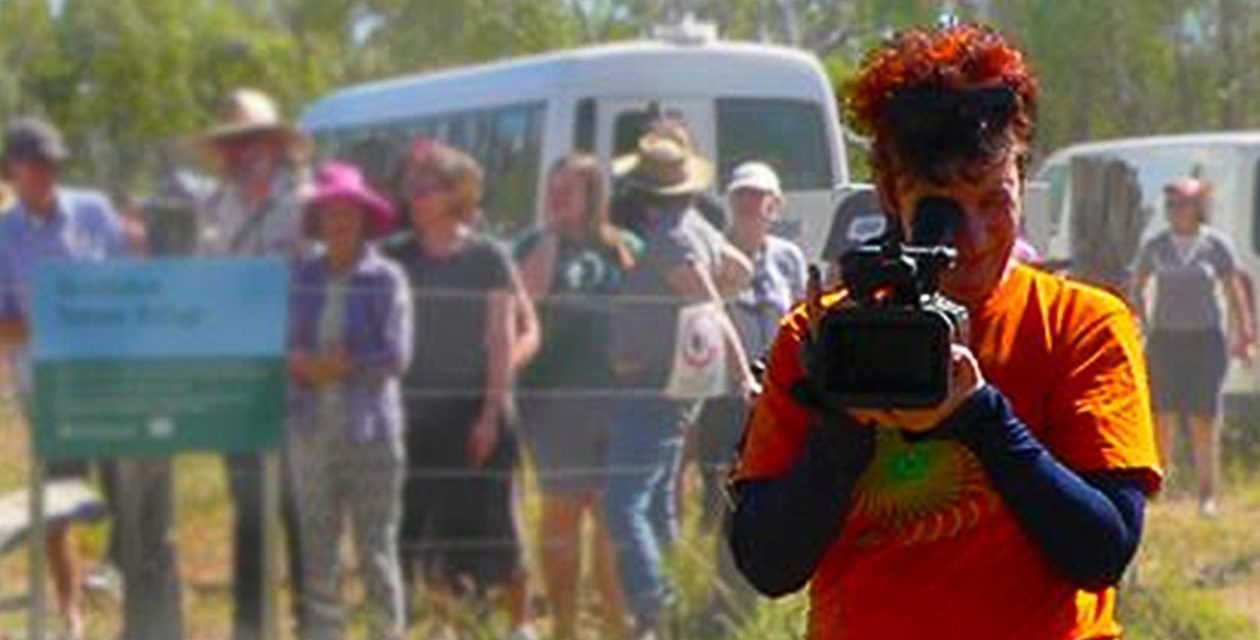 The thing that struck me sitting out the back at Avid Reader early in 2020 watching the documentary Your Water, My Water, was not the dedication needed to do five years filming of the community’s opposition to the expansion of New Acland Coalmine. It was the film’s gentle way of delivering its big message – a small genuine and battling community can face off a big company.

It could have been made in the genre of protest films, like the campaign films that we are used to, but it was something else. The filmmaker, Wendy Rogers, let the journey of the Oakey Coal Action Alliance speak for itself – through family-wrecking non-disclosure agreements, layers of coal dust over the farms and furniture, health breakdowns, family grief and the stresses and joys of a grueling court cases.

The ABC’s Compass team partnered with Wendy for its production. They were drawn by Wendy’s organic film style – walking with a community over time. The result is a big statement about what price gets paid along the way by a few for our mining obsession.

STOP PRESS The High Court has decided yesterday, (3 February 2020), that the case against stage 3 of the expansion of the New Acland Coalmine will be reheard in the Queensland Land Court. For details see HERE

Wendy is one of West End’s original feminist creatives.

As Wendy describes that era:

“We had a lot of fun, laughed around a lot of kitchen tables and wore a lot of hats to get films made.”

Wendy started out doing radio documentaries for 4ZZZ on film and cultural issues. She was a part of Megaherz, the Women’s Radio Collective who ran programs. 4ZZZ was the first station to obtain a broadcasting licence for community radio under the Whitlam Government’s media reforms. [1] 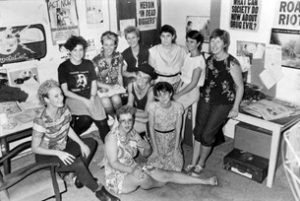 After her experience with radio, Wendy turned to her love of camera work. From the mid-80s, Wendy persisted with the task of finding ways to make film and expand local capacity for film-making  running workshops for women film-makers. In 1988 she teamed up with Sue Ward to make City for Sale.

Wendy’s first notable little film grew out of the tensions criss-crossing Brisbane in response to a spate of freeway proposals and the evictions and demolitions in South Brisbane in the lead up to Expo 88.

‘City for Sale’ works through stories told by people affected by the demolitions. With the overlay of voices of Brisbane residents and citizens, it captures the demolition of George Street shops and beginnings of the construction of the Brisbane Transit Centre which was built on the old Roma Street Markets site.

Property is a nation-wide obsession, and In Wendy’s little film, the scars of the vicious circle this represents for city and community are laid bare. This 12-minute film had great timing. The community was outraged following the revelations of corruption at the highest level of Queensland politics during the 19 years of the Joh Bjelke-Peterson era. Expo 88 was the biggest of the projects which were part of the flattening of large parts of the city scheduled under Joh. It ripped the heart out of old South Brisbane to stage the six-month event.

In ‘City for Sale’ the city is coming down, being torn down. Brisbane in the 80s really was a city for sale, a trend that continues today as legislation enables big changes to our city while opportunities for community action are expensive and limited.

Remarkably in 2020, thirty-two years on, the Brisbane Transit Centre has itself been demolished.

Filming in a Frock!

Over the decades Wendy could be seen riding her bicycle through West End with T-Rex the family’s fluffy dog in the basket on her handlebars. And you’d generally find her in a frock. She made films in frocks too.

Wendy routinely chose to make films about people who might be understood to be different, to be on the fringe, out of the mainstream. In 1995 she directed photography on the short film People with Epilepsy which features Hugo Weaving as one of five people with epilepsy. The message was breaking down the barriers to people with this invisible disability.

In 1999 and commissioned by ABC TV Documentaries, Wendy wrote and produced The Diviners. Water diviner, Wayne Rosentreter, reckons he can find water on a choice piece of fertile river flat. When he gives the nod for the dairy farmers to buy back some of the family farm, he has to drill for the promised water. It’s not as easy as he thought, and his reputation as a successful diviner and bore driller hangs in the balance.

In 2005 Wendy worked with Indigenous and other community organisations of West End to make Footprints Along Kurilpa: a film bearing witness to the historical and contemporary significance of Kurilpa Point as a meeting and camping place before its makeover and the moving on of the park dwellers. 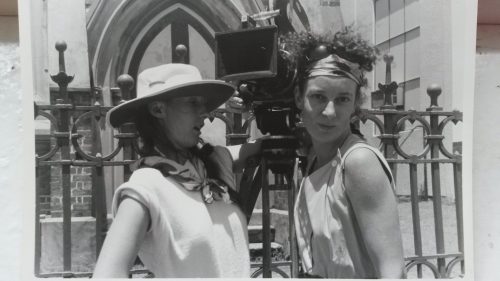 1996 was the 100th anniversary of the Lumiere Brothers public screening of the first cinematographe film in Paris. With ‘City for Sale’ under her belt, Wendy made the first film on Queensland film history – Kinetone – a personal film history, subtitled: Celebrating Australia’s centenary of cinema, a slice of Queensland’s turbulent history as seen through the viewfinder of Queensland’s film pioneer Al Burne.[2]

Burne passed on his knowledge to his sons George and Len. Wendy knew George Burne personally and with her fascination for Queensland film history, a script was born. 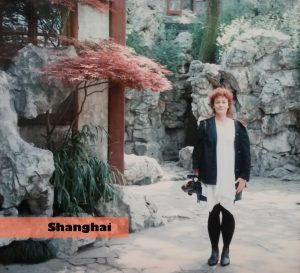 More recently in Wendy’s film career, the ABC’s Compass program said ‘we have no money, but we like your work’ when they commissioned Wendy to produce Your Water, My Water. This film follows the Oakey Coal Action Alliance’s struggle against. New Hope company’s New Acland Coalmine in a farming area on the Darling Downs.[3]

Aileen Harrison is the focus of Wendy’s story, and her determination at age 84 is a phenomenon. The whole struggle for her takes a huge toll but she is not put off.

Aileen Harrison has been standing for her land and her community since Stage 2 of the coal mine opened close-by fifteen years ago.  Aileen is one of the objectors holding New Acland Coal to account in the Queensland Land Court. She is the one person not held under the notorious ‘Confidentiality Clause’ who can speak openly about Stages 1 and 2 of the Acland Coalmine and the devastating effects of living near it. 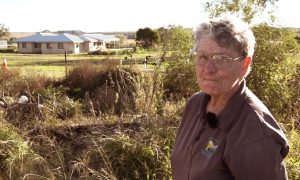 In the lead up to this televised Compass documentary, Wendy made two other short films. She filmed the removal of the last church in the town of Acland as the mining company dissolved the settlement of 50 houses for their mine expansion, and a film about the unprecedented drop in the water-table on a farming property operating near the mine. That farm’s viability was greatly threatened.

Wendy has worked on and in the documentary industry. Her passion for Queensland and for West End (‘no shortage of topics and stories here’) has involved costs and setbacks.

‘When I started making documentaries in Queensland in the 1980s, if you chose to stay and make films in Queensland, you had to do a bit of everything – write, camerawork, edit. You are on your own doing the many roles of a doco project. There were no real specialists to call on and no money to draw on them – except perhaps in the wildlife documentary area.‘

Funding is the ever-present challenge. Obtaining funds for an idea can be a slog. Wendy funded her own films or she sought funding, generally with her talented team of film associates. Looking back over her filmmaking it is mostly about her choosing what’s lost, what needs oxygen and what makes a good story.

Her independence and her determination to make films of her choice has not made much money she says.

Wendy’s quest for bigger budgets to make films has not yet been realised. Why are we not surprised? Wendy’s film-making heart definitely lies in championing the voiceless, documenting the view from the fringe, highlighting the impacts that change can have on certain groups and celebrating their struggles and the wins along the way.

I wrote this tribute because Wendy Rogers has recently left West End to set up her life on her acreage property in Koreelah on the border south of Boonah. She has not stopped film-making. She has been working for the past year documenting an Indigenous-led process where property holders are incorporating cultural burning into land management.

She’s learning it, living it and filming it. Watch this space – we will see a filmed case study of cultural burning from Wendy.

‘There was incredible opposition to the whole idea of cultural burning until mid-2020. Now there’s a feeling of going beyond the anger and separateness, of dealing with the serious issue of our fires and their management. Some local Githabul people and our close friend, Aunty Kali, Gulibal Githabul elder, have trained with Victor Steffenson (nationally recognised Traditional Burning Man) and have researched the local area. Aunty Kali is working with us in our small group. It’s all jelling!’ 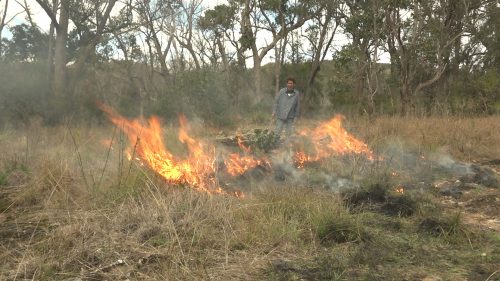 Wendy Rogers, director of Pipic Films is a seasoned filmmaker who has produced films for Queensland Health, the World Health Organisation and the Australian Broadcasting Corporation.

[2] Check out the four-minute snapshot Wendy made about Al Burne’s work HERE:

[3] Several big spenders have made fresh disclosures with the Electoral Commission of Queensland ahead of the major parties reconciling their expenses for the October state election. In the expenditure returns filed to date, mining company New Hope spent the most, $658,528.31.