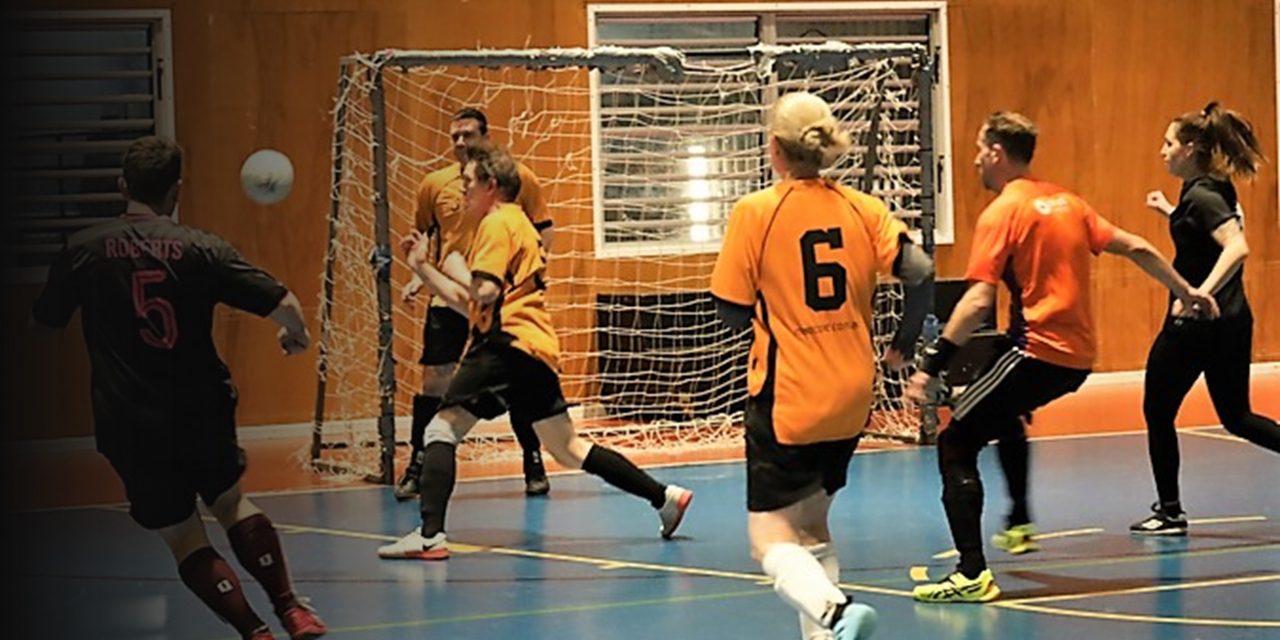 On a Tuesday evening, when the hustle of the day has died down, eager Futsal players converge at West End State School. They pass through the new expansion towards the brightly-lit hall where the sound of squeaking shoes and cheers can be heard. Inside, a “soccer” game is underway. On the basketball court, I see players in two colours dance around each other, a ball darting around them all. A referee follows the play up and down the court while the team’s extra players laugh and shout on the sideline. I seem to have walked into a social gathering, but with exercise.

Brisbane Central Futsal has been running leagues for over 10 years, with competitive and social games on Monday, Tuesday, Wednesday and Thursday nights. Tonight is a social competition between mixed teams that has recently started at the school and my guide to the sport, court assistant Tom Babey, is a wealth of information. He explains that Futsal is not well-known in Australia (a country that still calls football “soccer” 1) but one that has been gaining popularity.

The ball passes quickly between the players as we talk, but the game itself seems slow, considered even. An indoor sport, Futsal is played by 2 teams of 5 players each, (goalkeeper included) that compete to score goals in a 40-minute game, split into halves. While it looks like football, Tom informs me the rules are slightly different. For instance, players kick the ball from the sideline instead of throwing it and there is no “offside” rule 2.

I read later that Futsal originated in South America when a Uruguayan teacher – plagued with bored children – needed a way to play football with fewer players in a city where fields were rare but basketball courts were aplenty. The sport then quickly spread across South America. Originally called Futebol de Sala (Portuguese for “indoor football”) it was shortened to Futsal. Played on a hard surface with a smaller, less bouncy ball, Futsal requires control and teamwork. Tom tells me that it attracts players of all fitness and skill level. Apparently Cristiano Ronaldo credits the game with making him the player he is today.

On the court, each player seems to play at their own speed and substituting whenever they need to. While some rove the entire court, some play just forward or back, reducing the amount they run. However there doesn’t seem to be set positions – any player can and does go anywhere on the court. At one point the goalkeeper even swaps onto the field for a run. Every player is needed and used in a game that rewards teamwork over fierce tackles or aerobic fitness. It looks cooperative, fun and at times even creative.

Tom and I are interrupted by sudden shrieks and a shrill whistle. Someone has scored a goal! I didn’t see how it happened. One moment the ball was at someone’s feet and then it was pinging off players and past the keeper. There is a brief celebration, a high-five or two, as the players return to their respective halves of the court and the game is reset – yellow with the ball. The dance begins again. Short, sharp and playful is how I would describe it.

Everyone seems to be enjoying themselves; there is no foreboding seriousness between teammates or grave admonishments when a point is conceded. Opponents even share friendly moments on the court. There is a sense of playful competitiveness to the game, sportsmanship above success. Tom says this is something he loves. “Just to see the teams get so competitive on court and then when they hop off and just laugh”, he yells over the noise.

A week later I would join Maria Contoudios, co-founder of Brisbane Central Futsal, at Yeronga to watch the men’s league play, who were decidedly more competitive. As we watch the fierce skill with which they play, Maria shares the family nature of her business, from her co-founder husband, Michael, to her referee father-in-law, John. She is proud of what they have achieved in such a short time. With competitions for all ages and genders across four southside locations – West End, Yeronga, Camp Hill and Balmoral -, a Futsal academy, school holiday camps and a new HQ in East Brisbane, the Contoudios’s have every right.

The whistle is blown at full time and both teams melt into a group of men trading jabs at each other’s occasional mistakes. Maria asks new players how they enjoyed themselves and who needs a lift home, as everyone strips socks, shin pads and shoes. As I follow her to the carpark (Maria is taxiing a new player home), I consider what I have learnt.

Futsal is a skill-based game, played by fun-loving people from a variety of fitness levels. As an indoor, year long sport – it holds many benefits for Brisbanites wanting consistent exercise who are generally limited by heat and humidity.

It is social, even when competitive, and strangely creative. Crucially it places very low demands on player’s time, money and energy. I can see now what makes Futsal nights an eagerly anticipated post-work/school activity.

Ally Beech (she/her) says she is a Meanjin-born, memory-impaired mad woman recovering from 2020.