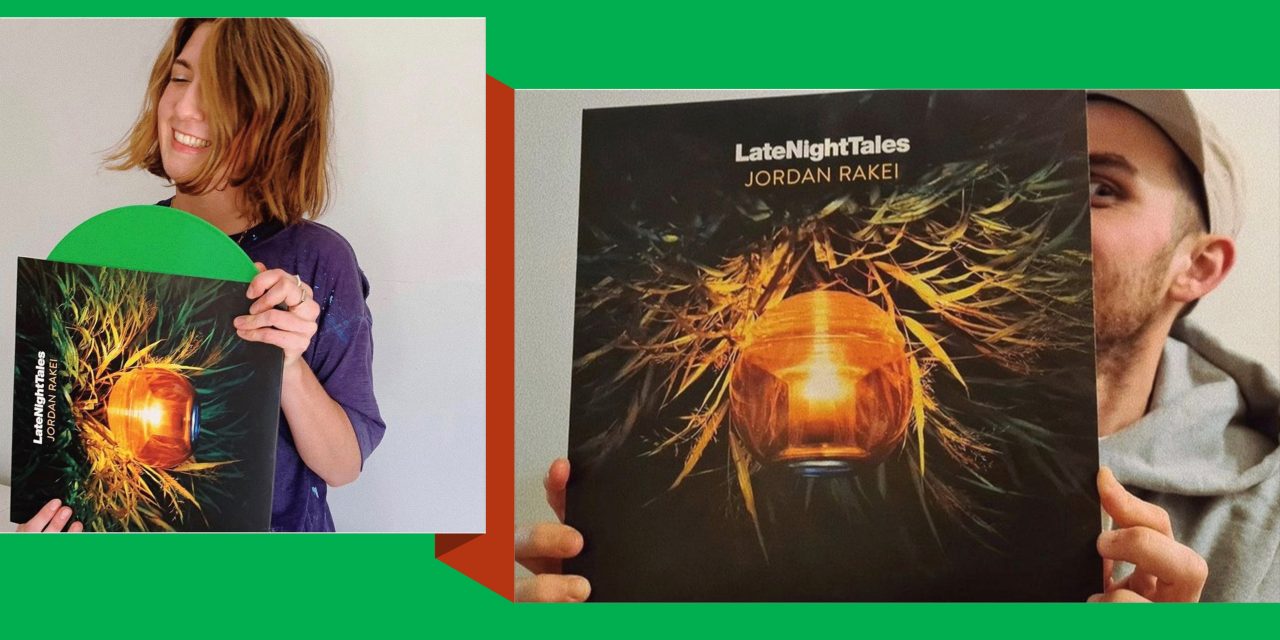 Long time friends Georgia Potter (Moreton) and Jordan Rakei once lived in the same West End street where they cut their musical teeth and went to gigs in suburban backyards. But, their careers have taken them on different journeys – Jordan’s to London and Georgia’s to Byron Bay. Now the pair has finally come together to release a duet in partnership with Late Night Tales & Night Time Stories. Here they talk about their friendship and their poignant duet, ‘Count a Heart’.

Can you introduce yourselves?

My name’s Georgia Potter and I’m the singer and guitarist of the band Moreton, based in West End and Byron Bay, and Jordan Rakei is originally from West End too but is now based in London.

How did you meet?

GEORGIA:  We found each other’s music online at first, on YouTube, and started chatting there. We didn’t really know where each other lived. Turns out we were both Brisbane kids cutting our teeth in music. I’m pretty sure Jordan’s first words to me were “damn that chord change” in the comments to some jazzy bridge of mine.

I was lucky enough to see his first gig in a suburban backyard a short while later – the gig was really good; I wore a really bad hat. We were making plans to meet up and ‘jam’ sometime when we realised, we both lived in West End – the suburb where you think you know everyone and certainly every street. As odds would have it, Jordan and I lived on the same goddamn street – Franklin Street – two doors apart, both of us making music on our own, in our bedrooms. I can still see him shooting hoops with his brothers in the backyard. We’ve been making music together ever since, hanging in NYC and Tokyo – our mum’s go out for lunch. We’ve each written so many tunes, but we’d never released anything official together until now.

JORDAN: Georgia was the first artist I ever collaborated with back in Australia (West End). She’s a singer/songwriter and was actually a neighbour of mine when we were growing up. I found her music online and I remember meeting her at a jam session and turns out we lived three houses apart. At the time, I was just a shy guy in my bedroom and started producing with her, so she’s an early part of my journey; one of the first artists to be involved in my career. She is an amazing songwriter and lyricist and it’s a privilege to sing on this song with her.

Tell us about Late Night Tales.

Late Night Tales is a series of abums – an iconic compilation series from London, that champions down-tempo music. The series invites various artists to delve deep into their music collections to create the ultimate “late night” selection. Typically, its full of already-released music – but there’s often an exclusive new track or two, such as the duet “Count a Heart” which I wrote especially for this album.

How did this duet come about?

Jordan asked me to write a new song for us to do together for the album. It was such a special request, not only to finally release a song together, but to be included on a Late Night Tales compilation is a bit of a dream come true. I think Jordan knew that, and wanted to be generous with the opportunity, which is just the type of person he is.

You know it’s funny how everyone talks about music being ‘competitive,’ but that’s never been my experience between musicians. We all do our best to bring each other up. Yes, it’s challenging (but what isn’t?) but the number of artists and new music a listener can love is limitless. Anyway, that’s probably a topic for another interview. It was a real thrill to see it released all around the world, in record stores from London, Tokyo, New York City and Brisbane, and have so many new people find us through such a dear friendship.

Personally, I found West End such a healthy place to grow up in as a creative. Not to brown-nose for the sake of the publication, but it really is true for me. There was a lot of permission from peer support, lots of opportunities to experiment and grow our skills, find the courage to then move off interstate and internationally, whether that be just for a tour or more permanently. I feel lucky to have had the kind of baptism into music that could be included in a rock n roll memoir from eras past – a truly free and bohemian chapter.  Packing the car full to the brim with gear and driving it three blocks away, just to skip back down on foot to re-join the hordes of friends, eventually wandering home via the geranium-lined streets.  Highgate Hill house parties when the main drag was too much chaos, or not enough chaos! There was so much improvising all around me.

I remember the first time Jordan agreed to come and jam at a gig with me and he improvised in public for the first time. That was a big deal for him, as he was very shy. He was already so good at it but it’s different when you are not in your bedroom and instead, you’re up there on the mic with a crowd gazing at you. He actually lay down on the stage, closed his eyes and sang so full of heart. I lay down beside him and we just sang on the floor for a while. I’m sure all the crowd could see was the bottom of our shoes but damn it felt good. They were sweet West End days that I’m very fond of.

What ‘s the likelihood of you both collaborating in the future?

We have a few new things in the works, not for a duet, but it’s nice to keep creating with your friends. It’s actually all I’m pursuing really, is how to make beautiful and fun things with my friends and their friends. Simple pleasures.

Link to listen to the song on streaming platforms:
https://lnk.to/countaheart