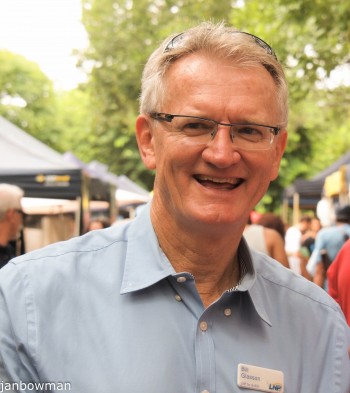 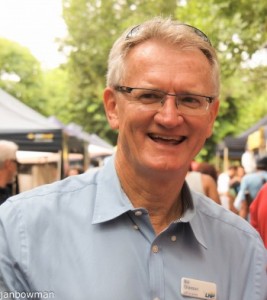 Having a Prime Minister as the sitting member drew significant attention to Griffith during the 2013 federal election, but there is a sense that this time around the eyes of the nation will be on Griffith with renewed interest, many seeing this by-election as the first test for Tony Abbott’s government.

On one side of the ring we have LNP candidate Dr Glasson, who is well liked in the electorate, and his personal appeal may be his greatest asset. He projected as much himself, when he was reported in the Fairfax press as saying that: “If we try to sell it (the election) on a political basis, or a leadership basis, we won’t get up.”

As the son of William (Bill) Glasson, Queensland Minister for Lands and Forestry and Police under Joh Bjelke-Petersen, Dr Glasson has an LNP legacy. “You may say politics is in my blood” he told Carindale Connect in March 2013.

Since the 2013 election Dr Glasson has been touted in the media as something of a giant slayer, having made significant inroads into the ALP’s primary vote in Griffith by gaining 42.2 per cent to Kevin Rudd’s 40.36 per cent.

In his campaign material, Dr Glasson lists his priorities as:

–  Improving frontline health services and delivering on our commitment to establish Hummingbird House, a children’s respite and hospice facility at Kangaroo Point;

–  Creating more local jobs by reducing taxes and regulations on small business and increasing their ability to compete – which will be helped by the Government’s new competition review;

–  Reducing the cost of living by scrapping the Carbon Tax – making households $550 a year better off; and,

– A stronger, safer community through more CCTVs, and support for sporting and community groups.

While he may have wanted to ‘keep it local’ and focus the campaign around Kevin Rudd’s resignation, the Abbott government’s shaky start has largely enabled Labor and the Greens to set the agenda.

There has been particular focus in the past few weeks on school funding, Medicare, and action on climate change. Whether he had planned to or not, these are the issues to which Dr Glasson is now having to respond.

Much is made in Dr Glasson’s campaign material of his credentials as a local doctor and a past president of the AMA. It says of him that: “Bill’s character is reflected in his belief that all Australians should be able to access quality health care, regardless of their circumstances or where they live. As president of the Australian Medical Association he fought hard for that outcome working with governments of all persuasions.”

However, after going public with qualified support for a proposed new Medicare fee for bulk billed patients, these credentials have been under attack and a ‘Save Our Medicare’ campaign has sprung up in Griffith and found resonance nationally.

It is hard to know whether the Medicare fee issue has gained any traction beyond the Labor and Green’s party faithful. While the government has not categorically ruled it out, the Acting Health Minister Kevin Andrews has made it clear that a new Medicare fee is not current Government policy, and Glasson says Labor is just ‘scaremongering’.

Locals I have spoken with appear to be somewhat underwhelmed by the issue, some saying they already pay a gap fee anyway, and others that $6 doesn’t seem like much to ask. Nevertheless, Labor and the Greens continue to pursue the issue with vigour.