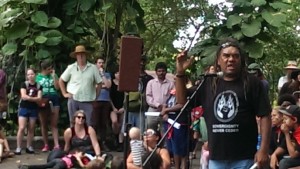 Uncle Wayne Wharton telling young activists “We are stronger than the bikies. No-one is going to take our colours. No-one.”

Hundreds of people of all races, colours and ages marched from Queensland Parliament House to Musgrave Park yesterday to commemorate Invasion Day. Speakers reiterated that sovereignty over Australia was never ceded, there is no Treaty and Australian Governments have consistently found new legal instruments to separate the first peoples from their land.

Uncle Wayne Wharton highlighted the G20 invasion in October and the 40th anniversary of the tent embassy in Canberra as key dates this year for the movement to assert its strength. “When we use the word sovereignty and we come out in strength, they shit themselves,” he said. When we do that sober and straight, they shit themselves three times over.” 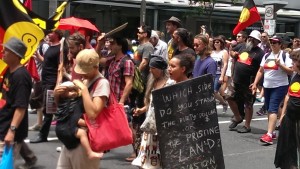 “On which side do you stand? The dirty dollar or the pristine land?” Good question.

Marchers were joined by hundreds more people at Jaegera Hall in Musgrave park for an afternoon of music and speeches topped off by John Pilger’s film Utopia. Watch out for Westender’s review of the movie.