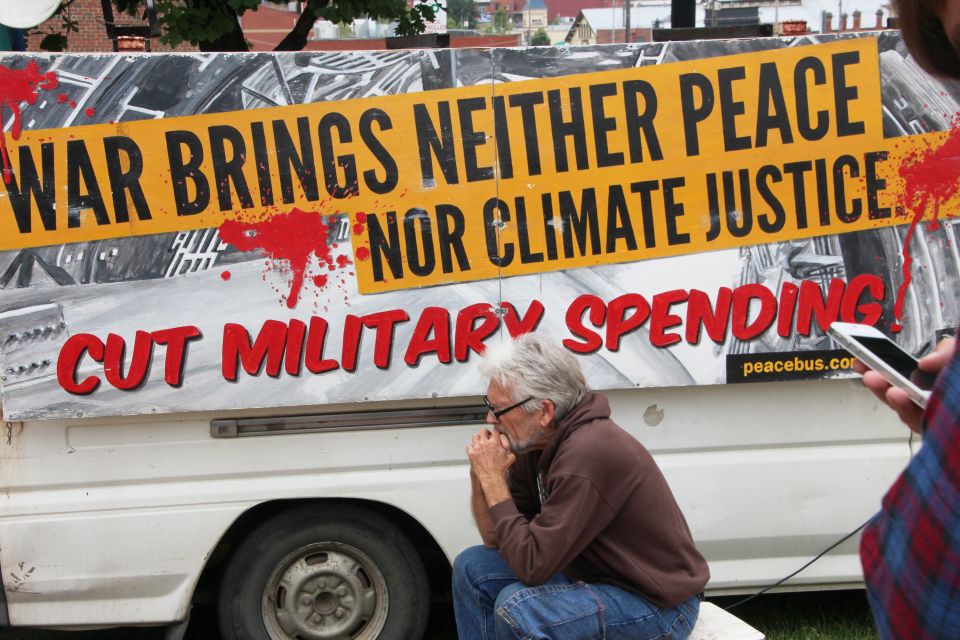 Australia in full spectrum dominance by the USA

For nine years now i have been occupying public places on the forth of July with Independence from America Day celebrations, artful preemptive strikes for peace. Next 4 July i will be doing it in Rockhampton as the US and Australian militaries gather there – 30,000 troops in all plus contingents from Japan and New Zealand – for the biennial military exercises at Shoalwater Bay 7 – 18 July.

‘Exercise’ is what the military call their occupation and bombing of Shoalwater Bay, its pristine wilderness and its coral reefs. We peace activists call it rehearsal for war.

Our political and military leadership say it is a training in “interoperability” by which they mean the seamless integration of Australian armed forces into the US imperial war machine.

We say it is a means by which they hijack our army, steal our taxes and pervert our foreign policy.

We say that it is the tribute paid by Australians generally in our role as a vassal state in the US empire; that it is our particular national contribution to the endless US wars in pursuit of full spectrum dominance of all nations and peoples on this Earth.

So immersed are we in the matrix of full spectrum US imperial dominance, that to say so is to speak both the unspoken and also the unspeakable.

Which is why we peace activists perversely welcome Talisman Sabre in Rockhampton. We see it as an opportunity when, with all those boots are on the ground and the media of militarism is focussed, to be visible in resistance and to speak up and speak out for peace.

Let me name some of the baleful influences of the imperial dominance which the Australia-US alliance has brought us.

Firstly the US alliance has led us into a state of perpetual war. You may recall PM Gillard bleating on about the war in Afghanistan being a war with a clear purpose and a definite end. Like PMs Rudd and Howard before her, she was parroting US propaganda and lying to the nation. Not only are the Australian SAS are still operating in Afghanistan, but also the Iraq front of US domination in the Middle East has been re-opened with an indefinite commitment of 600 Australian army and airforce personnel.

The US alliance has hijacked our armed forces and not just as task forces but rather the very military culture itself. US-Australia exchange programs are and have been happening for years now at every level and in every aspect of the military. Performing well in the eyes of the US military is how one builds a career in the our military. Speaking out against the US is a sure way to end a promising career.

The same is true of spy agencies. ASIS, ASIO, the Australian Signals Directorate are all US trained and integrated. All intelligence gathered is automatically shared with the US (and Israel). In return the US shares only what intelligence it thinks we need.

Recently the Abbott government passed laws to allow the collection and retention of the metadata of all emails and telecommunications of all Australian citizens. Q: What has pushed Australian governments into this obsession with privacy-stripping surveillance of its people? A: The US alliance.

And how has this come about? Because the very parliamentary system has been infiltrated by US imperial ideology and its stooges. There was a time when the Liberal Party was the party gung-ho for the US alliance and “All the way with LBJ”, the US president who enmeshed us in the US war on IndoChina. When the Labor Party came out against that war, and conscription for it, a landslide electoral victory and it began the Whitlam era of progressive reform: Medicare, abolition of university fees, the Schools Commission, the Australia Council for the Arts and many others.

Gone now is the Labor opposition to US wars and gone with it are the Whitlam era reforms. Now in the Parliament the ALP is in lockstep with the Coalition on war. Opposition Leader Bill Shorten stands beside PM Abbott during war affirming media meets, grinning vacantly like a man lobotomized. All debate on war and national security has been stifled.

How has this happened? Well the US Embassy in Canberra has been conducting what it calls “Leadership Forums” and by this means has encouraged young and ambitious politicians in both the major political parties to become familiar and share information. As with the military and the intelligence communities, no one now advances to positions of power and influence in the major parties without a tick of approval from the US Embassy.

And the Greens? Senator Scott Ludlum remains stalwart in his opposition to US wars and in the Senate Estimates Committee he is the most effective questioner of military and intelligence bureaucrats. Senator Lee Rhiannon too still speaks for peace. Never the less after playing out the demand for a parliamentary debate on the Iraq war as a condition for entering coalition government with PM Gillard, opposition to Australian engagement in ongoing US wars slipped into the Greens agenda background, well behind gay marriage as an issue for example.

If the new Green leader Richard di Natali’s recent statements of support for Israel are an sign of the times, we can expect more background creep from the Greens. Permanent war as a non issue. This is also the position of click activists like GetUp; war does not even rate in its top 20 issues.

But this is just another aspect of full spectrum dominance by the US: the dominance of our opinion making media by the US in terms of ownership, form and content. It is just not that US citizen and war criminal, Rupert Murdoch, owns most of Queensland print media for example. Or that talking heads from US funded think tanks get to provide the ‘expert’ advice. Or that the independence of the national broadcaster has been curtailed.

And it is not just that our screens are dominated by US made content and stories which promote redemptive violence . Or that Hollywood is a willingly complicit in promoting US government lies and propaganda; as for example the CIA blatantly funding the scripting and production of the Oscar winning movie, Ground Zero Thirty, the ‘official’ account of the assassination of Bin Laden, which, it is claimed, got President Obama re-elected. Committing war crimes on prime time Tv!

More pernicious than all of the above is that the very form of corporate media news is the way it inculcates fear, wilful ignorance and apathy. Presented breathlessly as a relentless torrent of bamboozling and frightening events, the Tv news of foreign wars alarms yet makes no sense and has no coherent narrative. Lies and conspiracies abound. Researched revelations of past lies surface only to be swept away by new lies. Credulity is always at a stretch. Too confusing and too depressing, most folk turn away. Oh dear, a nation asleep in front of their Tvs while merchants of death plunder the treasury.

As the Abbott government slashes welfare programs claiming claiming taxation shortfalls, in its current budget it quietly boosts military spending by more than $2.5 billion to $31.8 billion—a 7 percent rise on top of an 8 percent increase last year. Much of the extra cash is to pay for Australia’s participation in Washington’s war in Iraq and Syria.

This capital expenditure is to grow rapidly to $11 billion in 2018–19. Among the acquisitions will be that flying lemon, the Lockheed Martin F35 strike fighter.

Those distant battlefields also include preparations for some closer to home. The US alliance has locked us into the “Asian Pivot”, which includes a rotating base for US Marines in Darwin – which our taxes ($1.3 billion) paid for – and maybe a B1 bomber base too. And what’s the Asian pivot about? Containing China. In other words, war with China – our major trading partner. How crazy is that?

One could point to many more ugly domestic issues which have their roots in US policy, like border protection for example. Our harsh and inhumane treatment of refugees is a policy imported from the US. Imported or imposed, one has to ask?

The Drug War: eighty thousand Australians, mostly young folk – and the number is rising – are busted each year for cannabis use because we are locked into prohibition polices by US treaties.

Neoliberalism, the ideology by which assets built by and for the people are transferred to the rich and by which tax funded welfare programs are stripped, came to Oz from the US. It’s imposition has to be understood as another aspect full spectrum dominance.

The militarisation of policing and the stripping of civil liberties, secretly negotiated preferential trade deals and the undermining of consumer and environmental protections – all these are the poisonous fruit of US imperialism given entry by the US alliance.

The Talisman Sabre war rehearsals, the biggest of their kind in the southern hemisphere, is the opportunity Australian peace activists choose to challenge the US alliance. We do it with a Peace Convergence in the Rockhampton region. This is a mix of speak outs, debates, concerts, parades, blockades and non violent direct actions aimed at disrupting the war rehearsals and creating counter narratives.

For example intrusions on to the Exercise Area have become a regular feature and these are styled as Peace Pilgrimages. In 2009 the late Bryan Law famously rode his tricycle onto the tarmac of the Rockhampton airfield and smote an Australian Army Tiger Attack Helicopter with a garden mattock and so put war on trial.

Let me conclude with a call to peace. Or more particularly a call for peace activists to gather in Rockhampton during Talisman Sabre season. Come for a weekend or a week or more, whatever time you can spare. Make contact: https://peaceconvergence.wordpress.com/ or via FB > Peace Convergence 2015. Come prepared for action, creativity and challenge. Eureka spirit! Courage in the face of tyranny.

And not just in Rockhampton will the US Alliance be questioned. The Independent and Peaceful Australia Network (IPAN) is hosting a national conference with an opening public forum in Brisbane during Talisman Sabre at The Edge on 8 July. It will ask: Dangerous Allies? This the career concluding question asked most pertinently by the late and lamented former PM, Malcolm Fraser. More information: http://www.ipan.org.au/#/