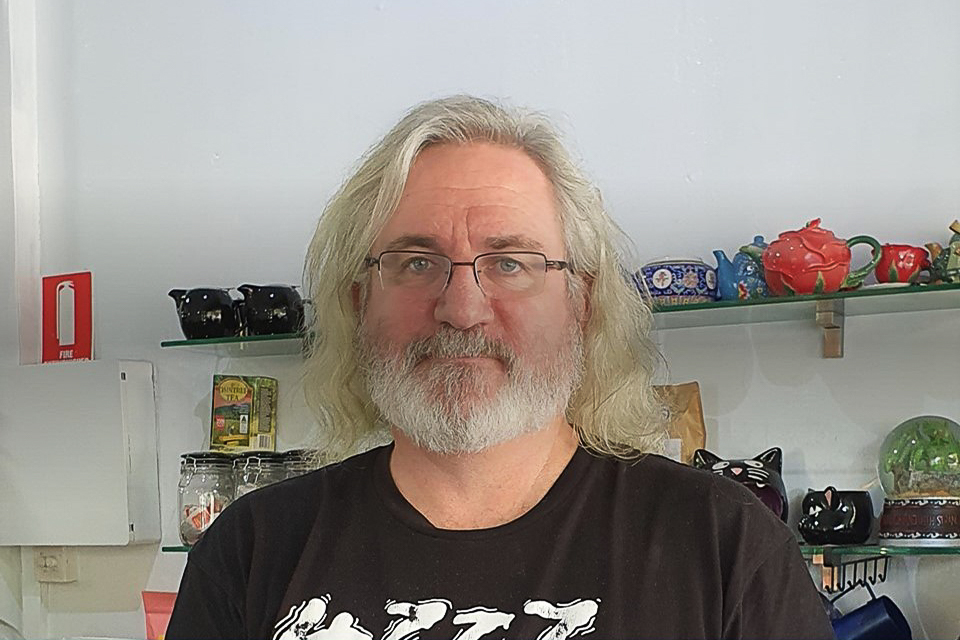 Mr Bartlett was preselected to stand for The Greens in Griffith for the Federal election in 2014 but later withdrew due to ill health.

Before entering politics, he was a social worker and has been a volunteer worker for many years with the alternative radio station, 4ZZZ FM. He currently runs a tea shop in Fortitude Valley.

While we describe him as an ‘elder’ given his long experience in politics, Mr Bartlett announced on 2 October, after we spoke with him, that he will return to the fray as The Greens candidate for the marginal LNP seat of Clayfield.

I don’t live in South Brisbane and wouldn’t want to suggest being across the fine detail, although I’m very familiar with the area and the electorate. In a sense, I represented it when I was in the Senate not too long ago.

In terms of the big issues there, and what’s changed in the last few years, we’ve seen a big surge in support for The Greens there, and particularly as shown in the election of Jonathan Sri in 2016. At that time, I was state convener of the greens and coordinating the city-wide campaign. We could see that there was a real build up in support for The Greens in the area and a genuine chance of winning the seat, and the broader party agreed to throw extra support into winning it – which we did.

We could see in advance of that, that there was a real build up in support for The Greens message.

In 2017 The Greens, with Amy MacMahon as the candidate had a huge swing.

One of the big issues in the area is inappropriate development. Developers having way too big a say and that is a consequence of state planning law as well as council town plans. Developers have too much sway, not least because they make political donations or used to be able to, until quite recently.

Obviously, we’ve seen a big increase in population density and major change to the nature of the place and that’s not to say all of that is bad. But, you know, community has not had a say or very much of a say.

Regardless of personality types, it has been shown that The Greens can be effective when we get elected and that’s what we’ve shown around the country. Whenever we breakthrough into a lower house at a general election, there hasn’t been a case around the country when we win a lower house seat that we lose it again. We’ve kept every one of them.

Obviously, the key test for The Greens in the State election coming up is maintaining and building further on the very large primary vote that Amy and The Greens got in in 2017.

I think the biggest thing, as we’ve seen in the last few years with one seat in the State parliament, The Greens have managed to build enough pressure to get developer donations banned in Queensland, which follows on from what The Greens achieved in New South Wales.

I think that is a key difference between us and both the other traditional parties, even if people don’t support every single policy, they know that it’s about what we believe rather than being influenced by corporate donations. We genuinely try to involve the community much more in the decisions that affect them at the local level.

I’ve seen so much disillusionment with politics and people just disconnecting entirely, and the key reason for that is people think it doesn’t make any difference, they’re never going to have a say. We want to demonstrate that, you can have a say in the decisions that affect you, particularly at the local level with local members.

Well, I think, to some extent, all candidates, if they get elected, have a much more direct opportunity to achieve their policy outcomes. And the key differences, our policy outcomes are better for the community. That’s why we’re unashamedly saying we can win the seat. If people want to see meaningful change, you’ve got to elect different people. If you keep voting for the same old parties, you get the same old stuff.

You need a fresh approach to push all the parties to change the way they do things and change the way politics works. You’d otherwise just be stuck in the same feedback loop. I’d say that the more Greens you elect, the more change you’ll get in the system that so many people are disillusioned with.

People have already seen the calibre of Amy MacMahon as a candidate and as an active member of the local community. And we’ve seen that even just leading up to this election where we’ve a very strong campaign on the ground, people going out and listening to the community. But When we go and talk to people, it’s not just a sales job, it’s a listening job.

Amy has led forums, in hearing from the community about what sort of vision they want for South Brisbane. Everyone can do a sales job about how great they are. But the key differences, if you’re actually going to listen, it’s the people that live in the community, that cumulative perspective and knowledge that makes for the most informed outcome.

The more seats we win, the more chance we have a balance of power and, if you do find yourself in that situation, you have more direct, immediate leverage. I would say even if you don’t have balance of power, you still have a significant opportunity to use the resources and the platform of Parliament to push and promote community views and, and to amplify social movements and community movements. So you know, balance of power or not, the more seats The Greens have, the more chance there is to make politics work better and push for a future that provides a good quality of life for everybody rather than just the corporations and the well off.

If there’s a balance of power circumstance, The Greens have officially determined this already in advance that it will not support in any way, the LNP to form government.

Some might say that it reduces our bargaining power in terms of trade-offs. But we’re not interested in trading off. We know what the LNP stands for, and we’ve all seen quite recently what they do when they get into government with Campbell Newman, and many of those people are still there. So, we’re not interested in giving any credence to or seeing a return to that.

The big thing we can do with balance of power is make sure that state government is focused on properly rebuilding the community through genuine job generating activities: through genuine investment in public infrastructure, public housing, public schools, rather than what we’ve been seeing from this government, such as wage freezes and tax cuts, and royalty holidays for mining companies. Austerity never works, except for the wealthy. We’re at a real danger now of this recession leading to more entrenched inequality and more poverty and more homelessness. But we also have an opportunity in rebuilding out of this recession, to properly invest and to rebuild, to generate jobs by investing in the community.

The state Labor government has gone a little way but so much more needs to be done.