The Australian Greens have welcomed the announcement of a February 8th by-election in Griffith as the first litmus test of Tony Abbott’s leadership.

Candidate Geoff Ebbs said the Coalition Government was hurting the people of Griffith. 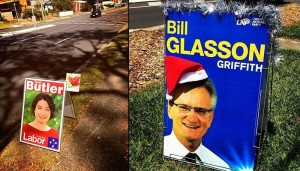 “People in Griffith are already suffering from Campbell Newman’s harsh cuts and we can’t afford more pain to come from Tony Abbott.

“Here in Griffith we want action on global warming, a healthy reef and a compassionate society. Tony Abbott is out of step with our community.

“Less than six months into his leadership, Tony Abbott has left a trail of broken promises, cruelty and environmental vandalism.

“This is the people of Griffith’s opportunity to send a message that Australians deserve better.

Candidate Geoff Ebbs said the Greens would be running a strong people-powered campaign and would be aiming to doorknock 3,000 homes in the electorate. The campaign is data driven and powered by social media. The research and training for the campaign has been provided by Simon Sheikh, national director of Get Up for for years and then candidate for the Senate in the ACT.

“We might not have the resources of Labor and Liberal, but we will make a difference with our people-powered campaign.”