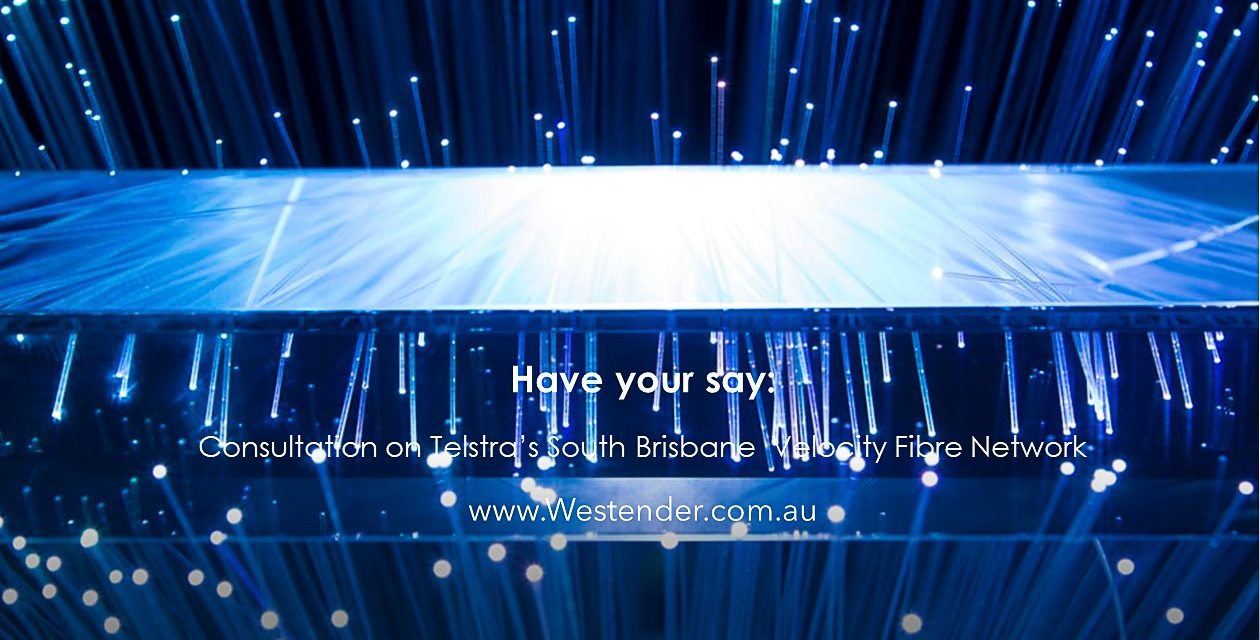 Do you live in the blue area on the map?

Do you pay a great deal for your internet?

Are you happy with the speeds and service you receive? 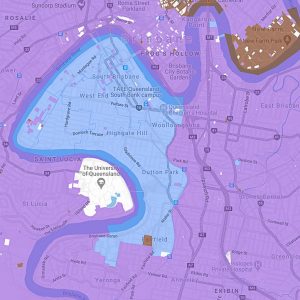 From May 20 to June 5, the Federal Minister for Communications, Cyber Safety and the Arts is seeking views on special conditions held by Telstra that are due to expire 1 July, 2020. Telstra is seeking to extend these exemptions until 2023 at the earliest.

Now is your opportunity to make a difference to the quality of internet service available in the Kurilpa Peninsula. Head to the Department of Infrastructure, Transport, Regional Development and Communications website before 5 June to find out more and have your say.

What is the South Brisbane “Velocity” network?

Since the demolition of the South Brisbane Exchange to make way for the Queensland Children’s Hospital, about 11,000 premises across West End, South Brisbane, Highgate Hill, Woolloongabba, Dutton Park and Fairfield have been serviced by a Telstra-owned Fibre to the Premises (FTTP) network branded as “Velocity”.

Designed before the nbn (formerly NBN Co) rollout began in earnest, the South Brisbane network was built to emulate the PSTN (copper wire) network that came before it. This enabled customers to have a similar experience as before, with a phone line and internet connection.

However, due to these design choices by Telstra, the network is not capable of functioning in a similar way to other wholesale fibre networks.

In technical terms, other similar high-speed broadband networks that are not part of the National Broadband Network are obliged (under Parts 7 & 8 of the Telecommunications Act 1997) to supply wholesale layer 2 bitstream services on a wholesale-only basis.

Complying with the law would require significant re-work to Telstra’s backend systems. Given that the design of the South Brisbane network largely predates the legislation, in 2012 the Federal Government chose to legislate exemptions to these parts of the Act, allowing the network to be operated under its current model with a separate (read: dearer) wholesale pricing and speeds structure.

This protected structure has led to (at time of writing) only two retail service providers offering services to new customers – hardly a sign of a rigorously competitive market.

The intent was for this to be a short-term arrangement, with the exemptions set to end on 31 December 2013. Since then, however, Telstra has repeatedly been granted extensions to the end date of the exemptions. The telco claims that over the course of the many years since the initial exemptions were granted, it has been unable to find a satisfactory solution for the operation of the network that would comply with the law, and that consequently, “Telstra will not be in a position to finalise any plans before [1 July 2020]”.

Potential sale of the network

The broad expectation was that Telstra would negotiate a sale of the network (similar to its sale of its HFC network) to nbn. However, in 2015 Delimiter reported that negotiations between Telstra and nbn had broken down.

In 2019, The Australian Communications Consumer Action Network (ACCAN) argued that although “at a commercial level this impasse has . . . not necessarily been unfavourable for Telstra or [nbn], consumers in the network footprint are significantly negatively affected”. Their research shows that in the prior five years, consumers within the network paid an extra $900 to $1200 for services over and above comparable options on the nbn.

The Australian Competition and Consumer Commission (ACCC) agrees. In July 2016, it stated that “the retail plans in South Brisbane and in Velocity estates have largely remained unchanged . . . These prices are higher than those offered on nbn and other regulated networks. For example, Exetel offers a 30/1 Mbps service with a 100Gb data allowance, provided on Telstra’s [fibre] network in South Brisbane, for $80 per month. This can be compared to Exetel’s offer of a 25/5 Mbps [nbn] service with the same allowance for $49 a month.”

In 2020, the cheapest internet plan available on Telstra’s South Brisbane network is $75/month, with 500 GB included and speeds of 30/1 Mbps. Exetel’s lowest offering is $90.99/month. Meanwhile, on the nbn, plans as low as $29.99/month are commonly available from providers such as TPG for users with low data requirements.

Due to the large number of service providers on the nbn, a myriad of different plan and price options are available to end users. This allows them to find the right fit, and in every instance at lower prices for comparable services.

Arguably, however, the more significant divergence is occurring on non-price terms. Telstra has not made any significant investment in its South Brisbane network since the rollout completed.

Meanwhile, on Friday 29 May, nbn is launching residential Gigabit plans on FTTP and limited HFC networks across the country. For $149/month, residents living just a stone’s throw from West End will have access to unlimited 1000/50 Mbps internet.

In 2018, the Minister for Communications decided to extend the exemptions until 1 January 2020 (later pushed to 1 July), as “Telstra will not be in a position to comply with Parts 7 and 8 by [the date] . . . The Government is disappointed by continued weak competition in South Brisbane and comparatively poor outcomes for end-users to those in [nbn]-serviced areas. Maintenance of the status quo is not a long-term viable option. The Government continues to view the exemptions as temporary.”

“If services are not able to be provided by Telstra in South Brisbane in compliance with the act . . . the Government would expect [nbn] to overbuild or acquire existing networks.”

What you can do

If residents are able to convince the Minister not to grant Telstra a further extension to 2023 as requested (or any future date, for that matter), Telstra will be compelled by law to make structural changes to its operation of the network.

In this new environment, according to the ACCC, there exists the possibility of greater competition on price and non-price terms, and overall better outcomes for end users.

To make a formal submission to the Minister, click the link to find out more.

What should be identified in a submission:

As an example, in your submission you could include how the current situation has affected you:

Keep in mind that your submission is more likely to be effective if you remain factual and concise in your statements.

Corneels has lived in various Brisbane suburbs since 2006 and now resides in West End. All views expressed are his own.