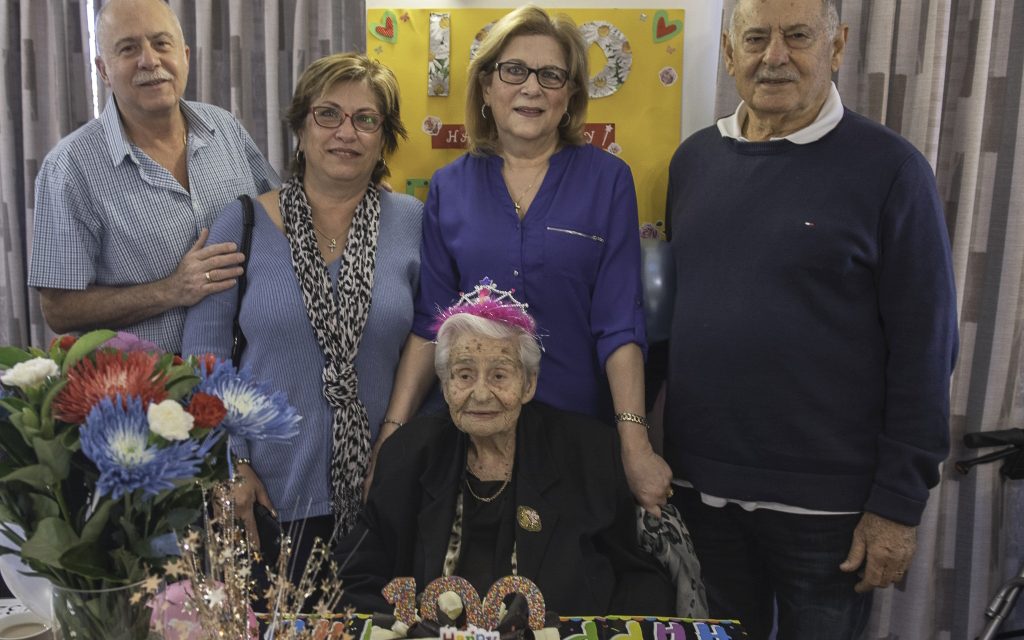 Like so many people who migrated to Brisbane, Helen’s is a story of dislocation, hard work, fitting in and rebuilding community.

Helen was born on 17 July 1919 in the Egyptian seaport city of Suez, situated at the southern end of the Suez Canal.

Helen’s father, Nicholas Athanassiou (1881-1921) was born in Kastellorizo in Greece and migrated to Egypt for work, where there was, at that time, a very large thriving Greek community.  Nicholas met and married another Greek expatriate, Anna Mastromanoli (1894-1963) in Suez. They had five children, three daughters and two sons.  Helen is their second youngest child.

Picnics at The Pyramids

Helen remembers her life in Egypt well. She remembers for example, swimming in the Suez Canal in the Greek Swimming Complex, Picnics at The Pyramids, and participating in the Girl Guides. She lived in Egypt during privations of World War II and recalls eating the not very appetising ‘yellow bread’ made from the wheat that was normally used for making brooms. 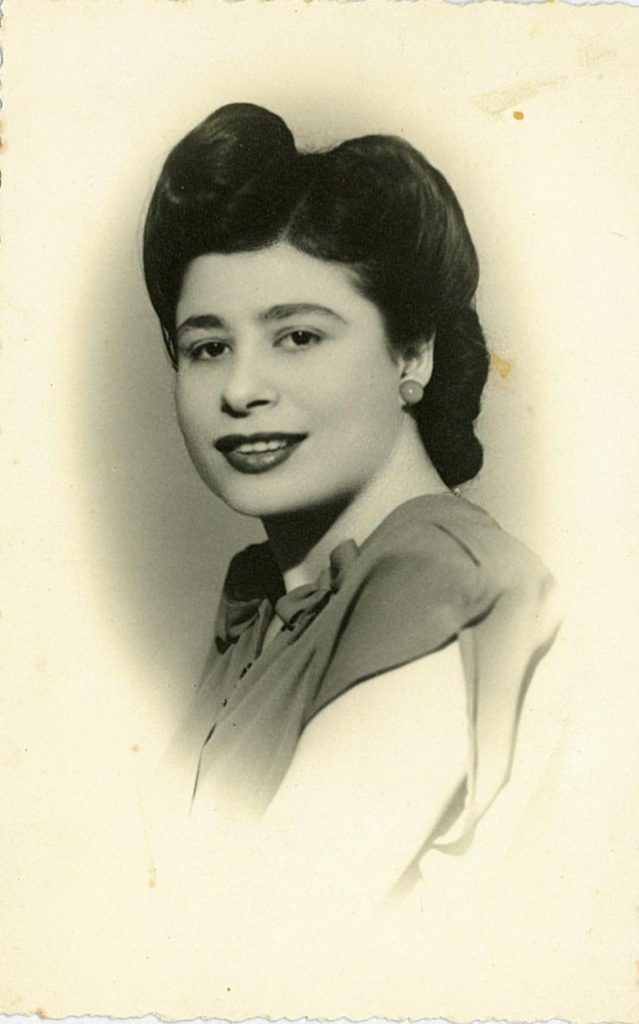 In 1949 Helen married Damianos Callipolitis (1911-1993), in Suez. In keeping with the traditions of the time, it was an arranged marriage. 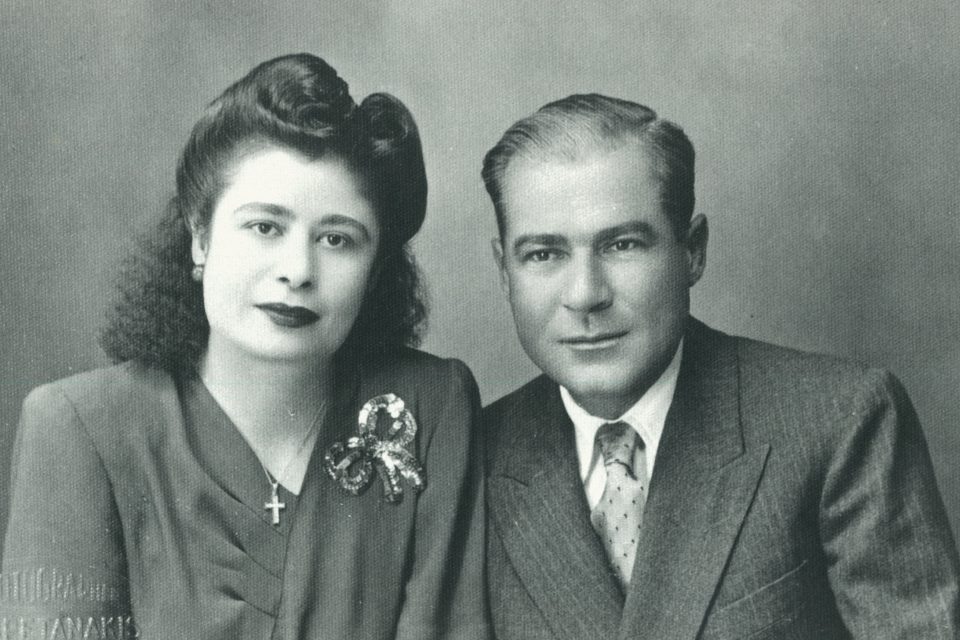 Helen and Damianos Callipolitis, abt 1950

Damianos was born in Rhodes in Greece and migrated to Egypt as a 17 year old to find work. He worked as a carpenter for the Tugboats and other facilities of the Suez Canal, which included Port Tewfik. Damianos eventually became a foreman in the French controlled Suez Canal Authority.

Helen and Damianos had two children in Egypt, a daughter Anna, born in 1949 and a son Evangelos, born in 1953.

In 1952 Egyptian army officer, Gamal Abdul Nasser led the overthrow of the Egyptian monarchy in a bloodless coup, and King Farouk was exiled. Helen remembers seeing the troop trains go past Suez at the time. In January 1956 Nasser became President of Egypt, and nationalised the Suez Canal and other foreign owned industries.

And so life began to change for the family and for many ex-patriots living in Egypt. The Suez Crisis in the 1950’s, the Arab-Israeli wars in the 1950’s and 60’s, and the rise of Egyptian nationalism, culminated in the great exodus from Egypt of the large Greek, British and French communities.

The exodus was due in part, Helen’s son Evangelos Callipolitis says, to President Nasser declaring that all vacant positions must be filled by an Egyptian citizen.  All people of other nationalities, he said, had to either become Egyptian citizens or to migrate to another country to ensure a better future for their children.

The Callipolitis family came to Australia in September 1963, when Helen was aged 44, her husband, 52 and their children 14 and 10.

When she arrived in Brisbane, Helen had never seen houses on “sticks,” before and “she was scared in case the houses fell down when we were inside”, Evangelos Callipolitis said.

The family initially lived with a relative on Montague Road, then with another relative in Buranda until they finally purchased a house in Louisa Street, Highgate Hill in 1964.

For Helen, Highgate Hill and West End provided a safe and relaxed community especially given the large Greek presence at the time, and this made getting around easy. She did not experience many barriers, but language was one of them – Helen speaks Greek with some English and Arabic.

The Callipolitis home in Louisa Street was one of the first to have a television and Helen remembers fondly having a house full of neighbours watching the Moon landing in 1969.

Helen’s son recalls that being used to different fruit, when Helen and Damianos bought their house they promptly cut down all the pawpaw trees, about 10 in all. Later, after eating a pawpaw, she regretted cutting down the trees and planted four new pawpaw trees.

Helen had some relatives and friends in Brisbane, and she was able to keep in touch with her overseas Greek family through letters and later the phone. She has never returned to Egypt.

In Brisbane, Damianos worked as a carpenter in a furniture store near the old Trittons Building, but life presented new challenges when in 1964 both his legs were broken in a hit and run accident and he was unable to work for many years.

Following Damianos’ accident Helen had to work for the first time in her life. She worked at making doors and parts for refrigerators and ovens at Malleys Limited until her retirement. Helen used to catch the train to work in Coorparoo every day. Damianos eventually returned to work at the Can Factory in Vulture Street opposite West End State School.

Family, community and church can play important roles in the lives of Greek migrants. Helen was a member of the Greeks from Egypt Association, and was deeply involved in the Brisbane Greek Community Church of St George where she sat in her usual spot every Sunday without fail. Helen was also active in the Philoptohos (Greek Orthodox Ladies) Association of St George and in 2009, at the age of 90, was presented with Life Membership by Quentin Bryce, then Governor of Queensland.  Helen was also part of the original fundraising committee for the St Nicholas Nursing Home and Hostel, a project that was instigated by Father Gregory Sakellariou and became the first Greek Orthodox Nursing Home established in Australia. 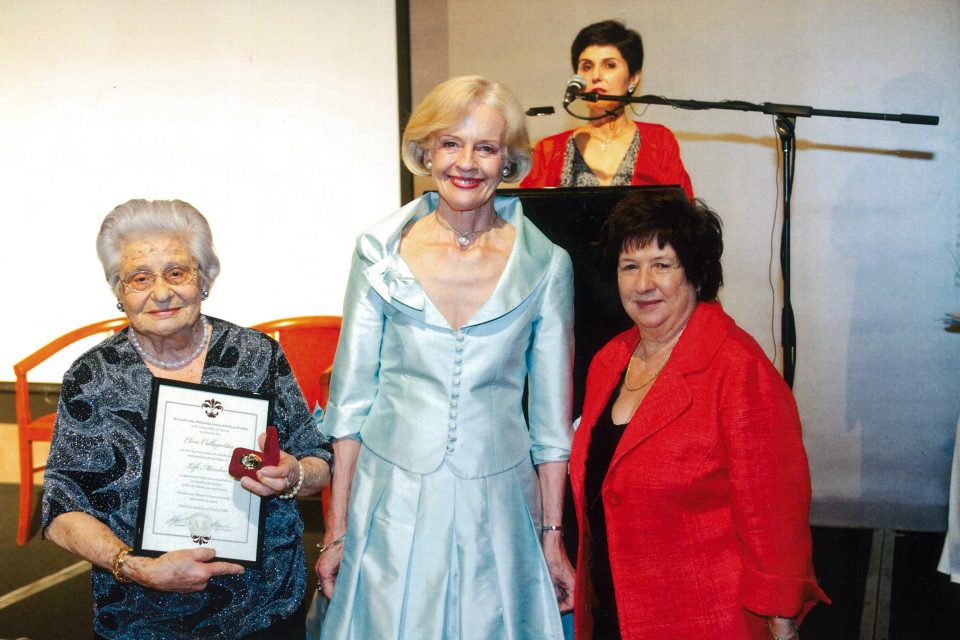 Helen was presented with Life Membership of the Philoptohos Association of St George in 2009 by Quentin Bryce, then Governor of Queensland

Helen Callipolitis is a woman I have known my whole life, growing up within the Greek Orthodox Community of St George, and a Priest serving that Community for over 25 years. She has been a tireless worker within our Church Family, generous of spirit, full of love, kind, and always supportive. I just adore her! This year marks the 90th anniversary of St George in Brisbane, and to think, Helen was 10 years old in Egypt when it all started. Who would have known in 1929 Brisbane, that a 10 year old girl at the other end of the world, would enrich our Community life so much. God Bless her.

Having been born at the end of one world war, living through another, and having left the home of her birth and settling in a new home on the other side of the globe, Helen’s values are simple and enduring – they focus on family and clean living, frugality and investment, enjoying life and encouraging her family to go on holidays when the opportunity arises.

Helen has five grand-children and eight great-grandchildren and is looking forward to her 101st birthday. 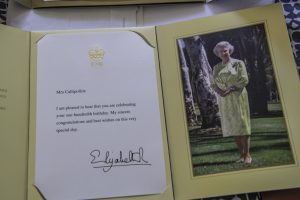 Many thanks to Stella Kazoullis, Helen’s Granddaughter and to her son Evangelos Callipolitis (Stella’s father) for helping with this story.

You can share this story using the buttons below.