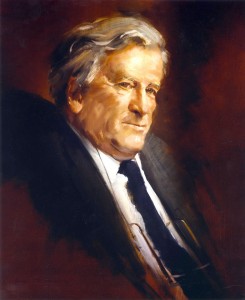 After weeks of qualifying our criticism of the christian Church, The Cross was gratified to see Geoffrey Robinson use his final public appearances to out the Church for its criminal negligence on sexual abuse. “If we are not looking for causes we are not serious,” he stated calmly before identifying “obligatory chastity” as a good place to start.

“I don’t think that chastity is necessarily a cause of abuse,” he speaks from personal experience, “but I think compulsory chastity probably is.”

He also identified the masculine nature of the institution as a major problem. “It is unhealthy. … I wish that women had an equal role.” He acknowledged that such a suggestion will rock the Church to its core.

The thousands of frustrated parishioners, parish priests and bishops who have been betrayed by Cardinal Pell were uplifted by Robinson’s characterisation of the self-serving cardinal as a disengaged leader who failed to support his clergy. Most damning, he convincingly made that case that the appalling Pell had actively undermined institutional efforts, in part led by Bishop Robinson, to address the criminal abuses by those priests through a national program. 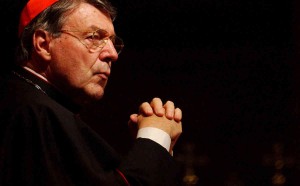 In a classic example of the Institutional breeding of evil through the promotion and perpetration of mediocrity, Pell protected the criminals in capes who turned to rape and coerced submission as a way to get their rocks off in a supposedly chaste institution. His excuse? His role was to protect the institution, not the congregation. May the scarlet of his galero turn to heat and burn his brain.

Robinson had already started at the top saying that Pope John Paul II had failed to get to grips with the problem of institutional abuse and specifically, “by remaining silent caused bishops to honour that silence.”

From one of their own, one with nothing to lose, telling like it is. Thank fate that the Royal Commission happens to exist and be flexible enough to vary its schedule to hear the testimony of a dying man.  … indulgeat tibi Dominus quidquid per audtiotum.

We thank you Geoffrey Robinson. We hope your passage over the River Styx is simple and peaceful. We leave it to the international media to amplify your words and to apply its bellows to the flames of hellfire. May the disgust for the Church that has poisoned the Irish congregation, sweep the world and reduce the corrupt remnants of this pre-Christian Roman institution from its role in public life.

Previous postings from The Cross