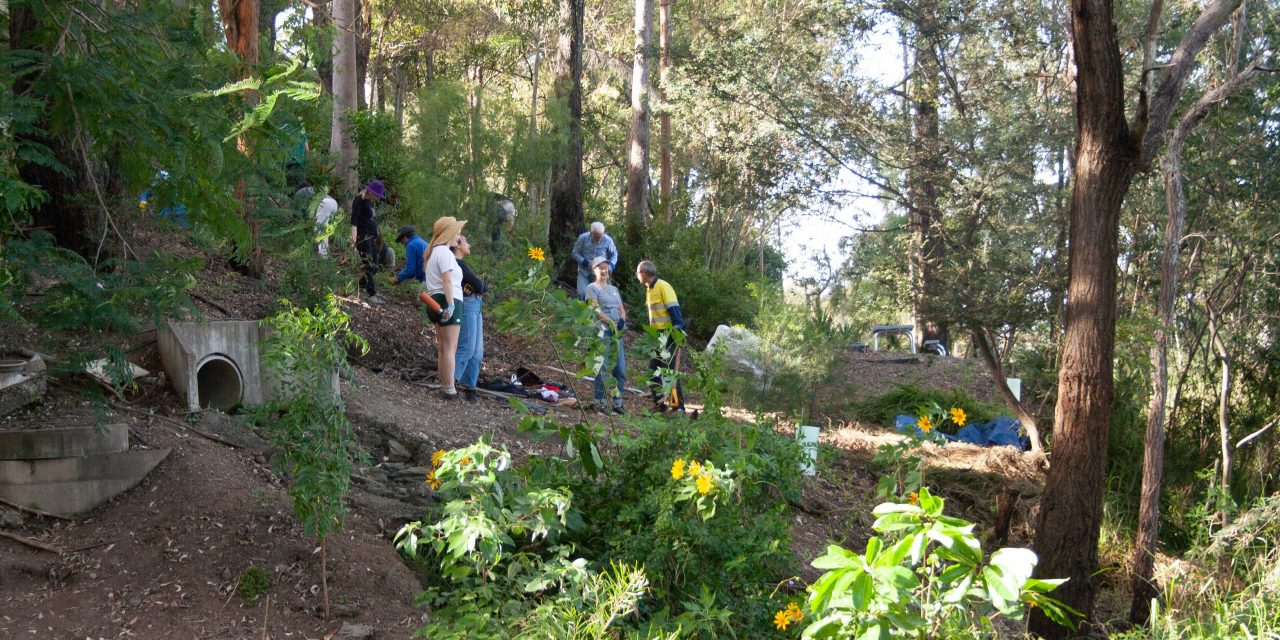 When the news about the global climate emergency is bleak, there is no better antidote to despair than getting out into nature and taking some practical steps to preserve the areas we love.

Large natural areas barely exist within the West End peninsula, but Rob Hughes, his neighbours, and friends are determined to change that.

Rob lives on the edge of a deep gully extending from the river’s edge up into Highgate Hill. Until a few years ago, the gully, currently known as Derby Street Park, had a long history of neglect. As a result, what was once a small rainforest became overgrown with weeds, and developments and modifications over many years meant that contaminated road runoff flowed into it.

“The pre-European landscape of lush rainforest and wetland vegetation was largely cleared more than 100 years ago. Almost all of the original rainforest vegetation is now gone, except for some isolated trees in the Gully.”

Rob shared his commitment to conservation with his partner, Dr Manon Griffiths, who was a forest entomologist with a strong interest in environmental protection. Rob has been working in conservation management for 40 years, both in wildlife and conservation policy. 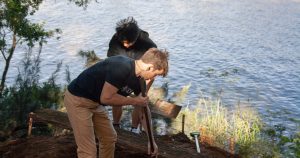 Together, Rob and Manon developed a Restoration Plan for the Gully.

“The key aim for this area is to promote local biodiversity, provide a corridor for wildlife and to re-establish native rainforest. The plan outlines the vision for the Park and provides guidance in terms of the types of plants that will thrive in the local area,” Rob said.

After her death in June 2019, Rob and her friends began to put a more concerted effort into realising their vision for a rejuvenated gully. This was not just to be a conservation project but the creation of a memorial to Manon Griffiths. Rob said it was particularly fitting to create a project involving the community because the importance of community was what Manon felt most passionate about.

“Manon and Simon set up the quirky (largely West End) conservation ‘collective’ several years ago. …and as a group, they were keen to do some conservation work in this Park – because of its connection with Manon.” 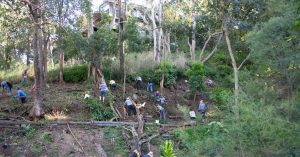 Neighbours Tim, Michelle, Ken, Melissa, Trish, Ellen and Greta have been involved in rehabilitating the Gully for years.  They have recently been joined by long -time friends of Manon, Simon, Kit and Anne, in protecting the park. Rob wanted to particularly mention Tim Smith and Trish Cranfield. Tim was editor in chief and designer for the Restoration Plan.

“Tim has boundless energy. He is down there weeding and planting three evenings a week, and on weekends. His volunteer work has made such a difference.”

“Trish is our “negotiator in chief” – she deals with Brisbane City Council and has been the main instigator in naming the Gully after Manon.”

“Simon, Kit and Anne, organised a group dubbed the Conservation Compadres – who came on site in late May to clear weeds, and plant out native ground covers and shrubs.”

The project to rejuvenate the Gully was a collaborative vision.

“This Gully was in extremely poor condition. The weeds had taken over and there were very few natives. It was a basket case in terms of rehabilitation. So, the first and most important thing, when we came here was recognition that it had huge potential because of its location on the most important biodiversity asset we have in Highgate Hill or in the West End Peninsula, which is the river corridor. So, we’re trying to re-establish the biodiversity values in Highgate Hill. Not only for us, but for the whole community.” 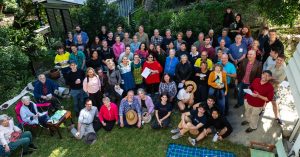 Volunteers at 30 May Planting Day – Image by Mark Crocker

Rob Hughes says the revegetation work will create a continuous understorey of shrubs and small trees to support a diversity of birds, including honeyeaters, fairy-wrens, fantails and silvereyes. The Gully also provides a habitat for water dragons, skinks and snakes.

“It means hopefully in years to come we will start to get more small birds right up into suburbia, into one of the most densely populated areas of Queensland,” Rob told me.

“These areas are really important, not only from a biodiversity point of view, but also for people’s psychological health. Having some open space, having somewhere where you can reconnect with nature, has been proven to be extremely important for us in terms of both psychological and physical health.”

Rob says the work on the Park will occur in stages, with the early work focused on clearing invasive plants, planting the understorey, and shoring up the embankment.

“We have been actively weeding and planting for more than 10 years. However, the Brisbane City Council has done a great job removing the most difficult weeds such as Chinese celtis, Cocos palms and cat’s claw creeper from the Park.  Without this investment, the rehabilitation activities would have failed.”

On 30 May this year, a planting day sponsored by Councillor Jonathan Sri and the Gabba Ward was a huge success. In a testament to community commitment to our natural environment, 84 people gathered at the Gully to assist with weeding and planting. Rob said another 100 people were interested but could not make it on the day. 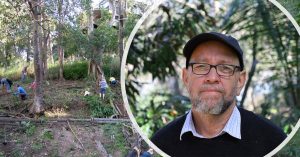 Currently, there is no public access to the parkland. The slope down from Derby Street is the only parkland boundary that abuts public land, but it is steep and challenging for those who are not sure of foot.

I was a little nervous about venturing down the steep sides, and as we peered into the Gully, I asked Rob if access for people is always essential.

“I don’t think it is that critical that everyone has access to it, but I think it’s important that people know that it’s there – that we do have these biodiversity values in a highly developed urban area like Highgate Hill.”

Rob says the area has the potential to connect along the river up and through into the suburbs. He says if we look after these areas more effectively, we will see more wildlife in Highgate Hill.

However, in his plan for the area, Rob does recommend that Brisbane City Council consider providing access from the Brisbane River by installing a small boat or kayak pontoon.

“Such a pontoon could be installed when Council attends to the erosion control works desperately needed near the mouth of the ephemeral creek.”

Rob considers that with the Olympics coming to Brisbane in 2032, Council could consider establishing kayak or canoe tours of the river, with pontoons providing access from the river to a range of conservation sites. 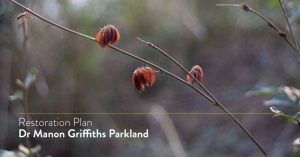 In February, Rob and his neighbours petitioned Brisbane City Council to request council rename Derby Street Park, to ‘Dr Manon Griffiths Parkland’ and recognise the traditional owners of the land by inviting them to propose an Aboriginal name for this site.

Councillor Jonathan Sri,  speaking in support of the Petition, noted:

“Dr Griffiths was really actively involved, not just in this particular bushcare group, but was a well renowned forest entomologist who contributed greatly to knowledge in a range of areas regarding forestry management and invasive pest management. Her contributions as a scientist in those fields I think speak for themselves.”

Cr Sri also spoke to the importance of recognising First Nations people by giving the Park a dual name that local Aboriginal people supported. Council agree to consult with the local Aboriginal community before a decision is finally made on the name of the Park.

The Park restoration group is planning more activities, but there are no firm dates.  Robs says that the lack of safe access to the site makes volunteer activities quite complicated.

Rob and Manon’s Restoration Plan is not just a guide to this one Gully; it provides a template for other communities wanting to replicate their work. It also provides an extensive list of plants that, while suited to the specific park circumstances – including soil, aspect, and shading, will grow in most situations. It can also provide a guide to local park managers and backyard gardeners.