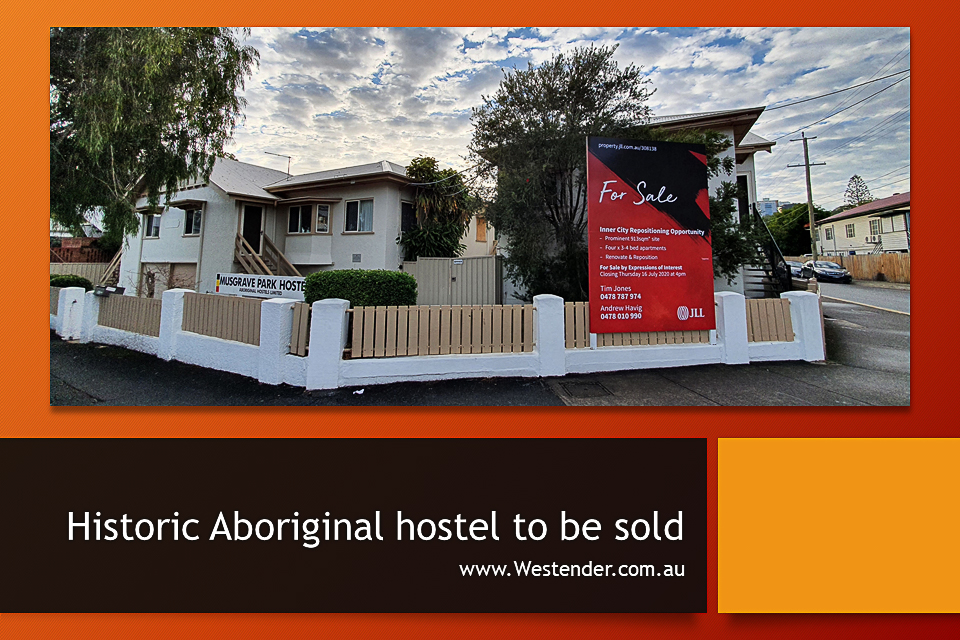 Indigenous Elders and Community organisations have expressed concerns over the plan by Aboriginal Hostels Ltd (AHL) to dispose of the Musgrave Park Hostel located on the corner of Boundary and Bain Streets in West End.

AHL is a Federal Government entity operating 47 hostels Australia-wide to provide accommodation for Aboriginal and Torres Strait Islander people who need to be away from home for a range of reasons.

AHL owns three hostels in Brisbane, and two are located in West End: Yumba Hostel in Gray Street, as well as the now for sale Boundary Street property. There is a third hostel located in New Farm.

Community members have approached the Westender about the impending sale, concerned about the loss of another public resource, especially to the Aboriginal Community in Brisbane. People are asking, how can the Community keep the property in Aboriginal hands, and if that is not possible, what could be done to transfer the property for community use?

AHL told the Westender that in 2017 it advised stakeholders that the Hostel would be closing due to building safety issues and low patronage. At the time of its closure in October of that year, AHL said, a small number of students were supported to move to alternative suitable, accommodation elsewhere in Brisbane. In June 2020 AHL confirmed that the property would be placed on the market.

A spokesperson for AHL said that its Board decided to sell the property because of the deterioration of the building and related safety concerns and that AHL also considers that there is appropriate alternative accommodation nearby, including in two of its own hostels.

Ms Jody Currie, CEO of Aboriginal & Torres Strait Islander Community Health Service in Brisbane (ATSICHS), told The Westender that the explanation provided by AHL ‘is not going to fly’ with the Aboriginal Community in Brisbane. She says there is significant demand in Brisbane for safe accommodation for women fleeing domestic violence and for Indigenous young people. This demand has intensified due to the added pressures on housing resulting from the COVID-19 shutdown.

Ms Currie said that she wrote this week to Dr Susan Gordon AM, Chair of AHL, asking the Board to reconsider the sale. In her letter, Ms Currie notes that AHL sold Jane Arnold Hostel in New Farm in 2015, which she said amounted to a loss of 50 emergency beds for the Brisbane Aboriginal Community.

“At the time our Community was told that AHL would replace these emergency beds by purchasing or building two hostels across outer South East Queensland where the population had moved, Logan and Caboolture were flagged. This did not happen,” Ms Currie says in her letter.

“…the name of the Musgrave Park Hostel should give the whole nation a sense of the importance of this site to the community of South East Queensland,” Ms Currie wrote to Dr Gordon.

Ms Currie said that the potential loss of a valuable community asset comes at a time when accelerated efforts are required to close the health and life expectancy gap experienced by Aboriginal and Torres Strait Islander people.

“This is resounded in the Prime Minister’s impassioned call to action in his February 2020 Closing the Gap Statement to Parliament …. with these clear policy imperatives driving our collective efforts going forward; it is unclear how the AHL Board has determined its course of action – particularly in the absence of a meaningful partnership with the affected Indigenous Community in South East Queensland,” Ms Currie wrote in her letter to Dr Gordon.

Ms Currie says that while ATSICHS Brisbane is not in a position to purchase the Musgrave Park property, they have offered a viable alternate management option to AHL, including to underwrite completion of minor capital repairs and asbestos removal.

Ms Currie said in a statement today that the Community can understand that AHL may want to dispose of the property in the long term for financial reasons.

“However, we would love for them (AHL) to come on this journey with us and be a willing party to the provision of a safe shelter for our most vulnerable young ones. We are talking about children – children who are homeless and need a helping hand.”

Local Member for South Brisbane, the Hon Jackie Trad MP says that she is aware that the planned sale has created significant concern among Indigenous organisations in Brisbane.

Ms Trad wrote to the Minister for Indigenous Australians, the Hon. Ken Wyatt, on 22 June, asking the Minister to stop the sale of the Musgrave Park Hostel, or, if AHL is not able to continue operating the Hostel, or does not wish to, to consider other community-based provider organisations willing to take on the responsibility. “Alternatively, I would be happy to start a conversation with the Queensland Government about how this vital service can be maintained,” Ms Trad wrote.

“Musgrave Park Hostel is so much more important to First Nations organisations and communities than it could ever be to a developer,” Ms Trad told the Westender.

“I join with these communities to respectfully ask that this sale not proceed, so options can be investigated to allow it to be kept for the benefit of vulnerable indigenous members of our community.”

Brisbane City Council has advised the Westender that while the 196 Boundary Street property is not heritage listed, it was built before 1947, so the Traditional Building Character overlay protects it in the City Plan.

“This means proposals to demolish any or part of the existing buildings, or to undertake new development, would be assessed against the Traditional Building Character provisions of the City Plan,” a Council spokesperson said.

The property is 900 sq. Metres and has 13 rooms and is zoned low-medium density residential. This zoning allows for a two or three-storey development for residential use.

To add to the urgency of this issue, interested buyers have until next Thursday, 16 July to submit an expression of interest.