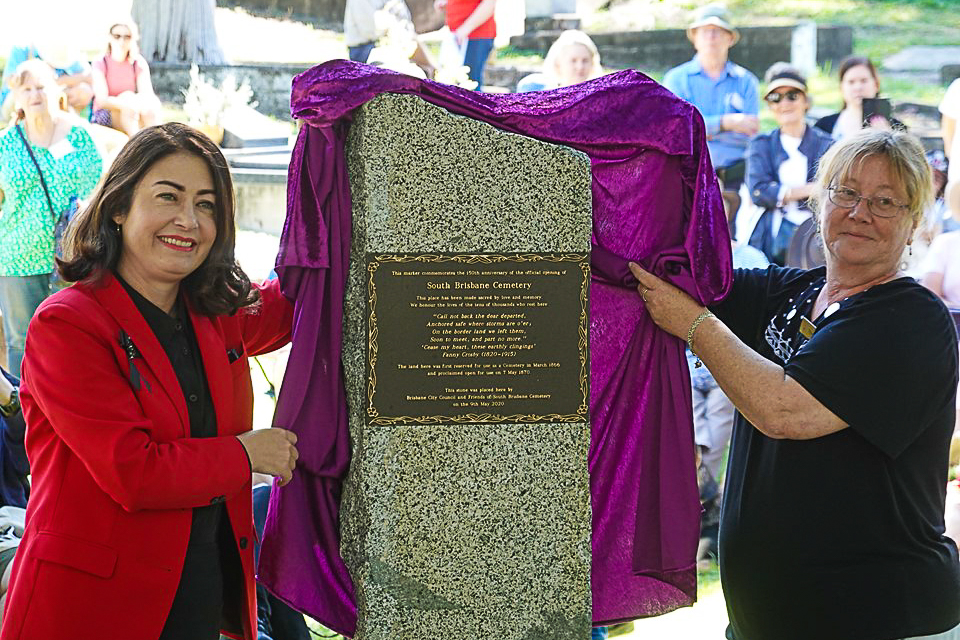 The largest community event in the history of South Brisbane Cemetery – outside of a funeral – took place there on Saturday 8 May. This was the 151th anniversary day, held to mark the official opening of this heritage-listed burial ground back in 1870 (on 7 May). The day was organised by the Friends of South Brisbane Cemetery (FOSBC) as a rescheduling of the 150th anniversary last year, which was cancelled due to the pandemic lockdown.

At least 150 people attended under glorious sunshine, including over a hundred relatives of those who are interred within the cemetery. Many had not visited the place in decades, and were pleasantly surprised to see it looking so good, with clean graves and neat grass all around the central activities area.

A total of 28 volunteers arrived early to set up the various stalls, and the day officially commenced with a ceremony in the garden area. The MC for the day was FOSBC member Jess Parker, who spoke movingly from personal experience about what the cemetery means to those with relatives interred there. Tracey Olivieri, FOSBC president, and Federal Member for Griffith, Terri Butler also addressed the crowd, before (re)unveiling the 150th anniversary marker that was installed last year.

The rest of the day was busy, with attendees visiting family graves to lay flowers, enjoying food from the café or BBQ, listening to headstone cleaning workshops and public history talks, taking a self-guided tour, viewing the photo display, or visiting the merchandise and bookstall, FOSBC stall, and guest stalls by KM Smith Funerals and the Annerley-Stephens History Group. 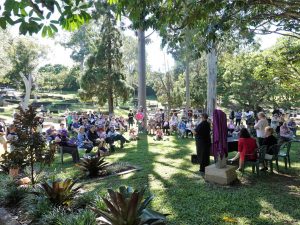 One of the busiest places was the family history stall, where a team of volunteers worked non-stop for a few hours helping people locate graves, and sharing genealogical information. Especially nice were the unexpected meetings between people who just found out on the day that they were related. There really was a great atmosphere all around.

It will no doubt be quite some time before a day like this is held at the cemetery again. This place was in danger of becoming quite forgotten and neglected a couple of decades back, so it was quite beautiful to see the throngs of visitors, the tended graves, the bright flowers, the mown grass and trimmed trees. This was a pay-off for the volunteers who have put so much work into the cemetery in recent years and have built a community that is transforming this heritage treasure into a vibrant, living space. 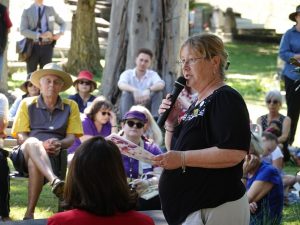 Chris Dawson and Tracey Olivieri of FOSBC were recipients of a Griffith Australia Day Award this year. They have volunteered at South Brisbane Cemetery for over 15 years. They have organised 23 community cleaning bees and over 100 other events. Friends of South Brisbane Cemetery is now the largest cemetery-related community organisation in Australia, and Chris and Tracey dedicate over 40 hours of their time each week to the cemetery.

“I’d like to acknowledge… all of the Friends of the South Brisbane Cemetery, who tirelessly work to make sure that this place is the beautiful monument to our history that it is.”

“I was pleased to recognise the contribution of Tracey Olivieri and Chris Dawson at the recent Griffith Australia Day awards. These awards recognise volunteers in our community who work hard for great causes. I am just blown away by the level of commitment and dedication and achievement of these people and it was my honour to confer the awards.”