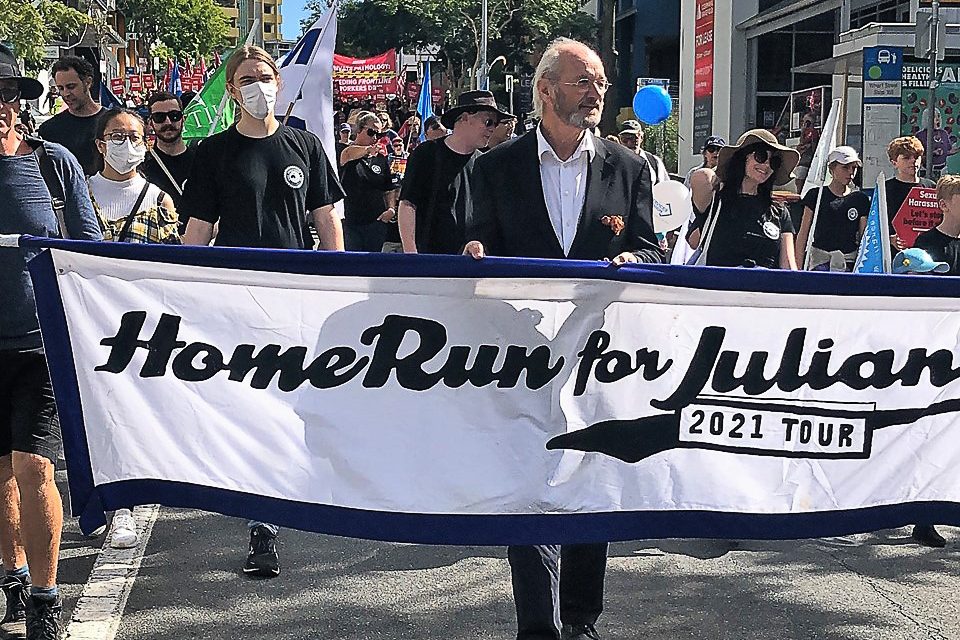 Monday 3 May was International Press Freedom Day, and this year it coincided with Labour Day in Brisbane. John Shipton, Julian Assange‘s father, marched with Julian’s union, the Media, Entertainment and Arts Alliance (the MEAA) on Brisbane’s Labour Day to remind Australia that his son, a famous Queensland-born journalist, whistle-blower and MEAA member was locked up in the UK on International Press Freedom Day and his plight was being ignored by the Australian government.

His supporters marched alongside him, holding a banner that read Home Run for Julian. They wore t-shirts that said, “He is in prison for us. We’re out on the streets for him!” and carried placards that read, “I am Julian Assange”.

Julian Assange has been detained arbitrarily (in the judgement of the UN) for ten years for disclosing war crimes by the US and their allies in Iraq and Afghanistan and is locked up in Belmarsh Prison, facing extradition to the USA where he may be imprisoned for another 175 years.

Julian’s mistreatment is intended as an example to journalists everywhere of the fate that befalls journalists who expose US war crimes. I marched with John Shipton on Labour Day to remind journalists that we are Julian too.

Civil Liberties Council President, Michael Cope, welcomed the decision of the English Court to refuse to extradite Assange, but condemned the decision not to release him from jail.

Although Senator Larissa Waters, Deputy-Leader of the Greens in the Senate, was unable to attend due to illness, a statement by her was read out. It said:

“On World Press Freedom Day, the Morrison government must finally intervene and provide an Australian citizen and publisher safe passage home, with assurances that he can live and work here freely.

“It’s time for Scott Morrison to fight for an Australian citizen whose journalistic work exposing war crimes has subjected him to an extraordinary campaign of persecution from the United States.”

“I call on the Prime Minister to pick up the phone to speak directly to UK Prime Minister Boris Johnson to release Julian from Belmarsh, and to US President Biden and his new Attorney General to drop the appeal against Julian, after the UK court rejected the extradition bid on the grounds of Julian’s health.”

“The Greens are proud to have nominated Julian and Wikileaks for this year’s Nobel Peace Prize. He should be being treated as a whistleblowing hero, not a criminal. The Greens and all of you stand with Julian, to challenge the notion that crimes can be covered up, and truth-tellers prosecuted and persecuted, in the name of secrecy and national security.”

“Julian has suffered enough – the Australian Government must intervene and bring him home.”

“We, the people of Queensland, foremost and strongest, must join with all other Australians, along with the people of Europe, the Middle East, South America, UK and USA, declaring, iron-hard, that this, the extradition of Julian Assange, slow-grinding murder before our eyes, shall not pass, will never pass.”

Mr Shipton had just begun a marathon tour down the east coast, travelling from Melbourne to Brisbane, talking first at the Mardi Grass in Nimbin, before travelling north for Labour Day and the International Press Freedom Day rally in Brisbane.

After Brisbane, the tour headed south to Mullumbimby, Lismore, Byron, Coffs Harbour, Bellingen, Port Macquarie, Newcastle and Canberra! John Shipton was on a journey to everywhere to rally support for his son and to reconnect with Assange supporters, before embarking on an even more impressive journey to the UK and the US where he will plead with President Joe Biden to ease his family and Julian’s decade-long suffering and drop the charges and free Julian Assange.