How much longer will we have to keep doing this? #March4Justice 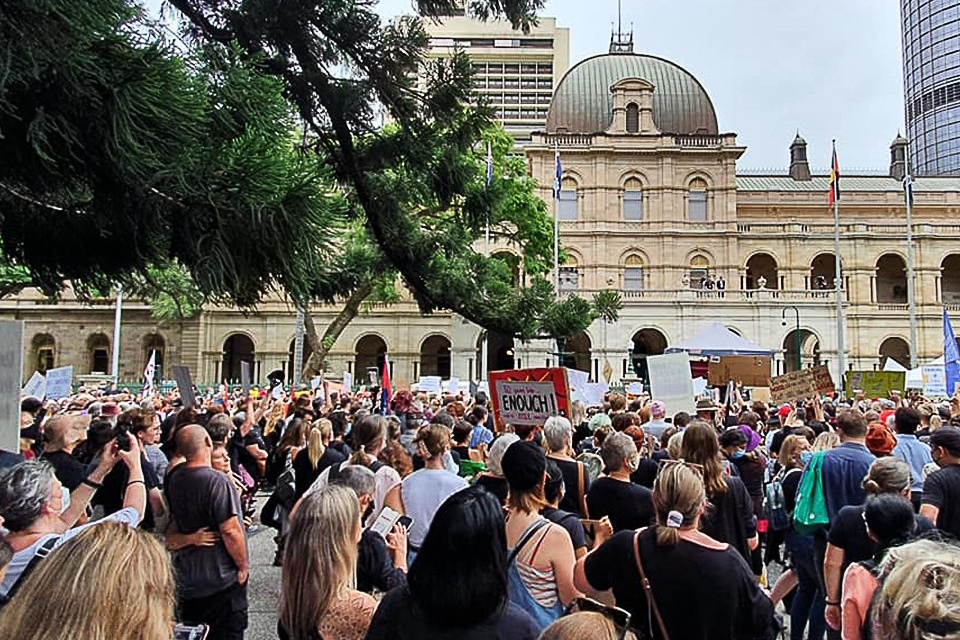 My first thought on arriving in King George Square for the March 4 Justice rally was that I needed to go to the toilet. My next thought was, would I be safe going into that toilet? How hidden was it? Could a man follow me in there? Then I realised how automatically those thoughts had arisen. Here I was at a march about women’s need to feel safe and I was thinking of my own safety attending a public toilet in the middle of the day. The irony was painful.

And that’s why hundreds of women (and some men) came together on Monday, in Brisbane and around the country, to express how angry and tired we are of constantly having to assess our safety. Of being forced to take responsibility for being safe from violence perpetrated by men, as though they are primitive predators with no self-control and no expectations from the community to behave with respect towards women. Enough is enough.

"I'm sick of reading about rapes and assaults on social media….I've been fighting all my life and I will not be silent".#March4Justice #Brisbane pic.twitter.com/ZqaTYHkzrW

The rally began with a welcome and blessing from Aunty Deb Sandy, elder of the original custodians of the land on which we stood. She spoke of the history of violence against her great-grandmother, her grandmother, and her mother, all survivors of rape.

A minute’s silence was observed for all those women killed by men—an average of one a week in Australia— before the crowd was led in a song and dance first performed by the women of Chile, Un Violador en Tu Camino, “A Rapist in Your Path”: “…it’s not my fault, not where I was, not how I dressed.”

Then the march began. A woman walking in front of me held up a sign that said, “No!!! I will not shut up.” Then she turned the sign around and on the other side it said, “My rapist’s name was Sol. 1984. I was 18.” As she walked she wept. Other women put their arms around her and patted her back. Another woman held a sign that said, “#MeToo 1988 I was only 19”. Another: “I was raped by my boss at work”. 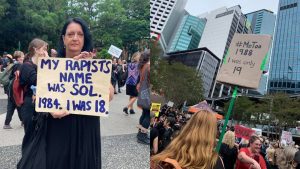 As we walked along the street it was as though the whole city had stopped. People on the footpaths, in cafes, looking down from office windows, watched. Some held up their phones to film and take photos, others stared with blank faces. Some smiled, clapped, or joined in the chanting. I saw one woman step onto the road and join the walk.

On arrival at Parliament House, we were greeted by Annastacia Palaszczuk and members of her front bench, as well as LNP leader David Crisafulli, clapping and cheering us on. On a small stage a woman sang “I’m Every Woman”. This was Asabi Goodman, an African American woman who, before she became a performer, worked as a chemical engineer. Her powerful voice led us and we joined together to sing “I Am Woman” and “Respect”. 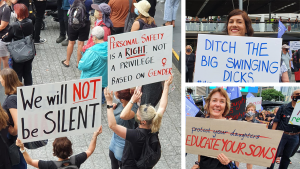 Daile Kelleher, CEO of Children By Choice, spoke of the need for all workplaces to be safe. She spoke of the need for the decriminalisation of sex work, and how vulnerable these women are because the nature of their work “creates significant barriers to reporting crime”. She emphasised the need for women to be believed. She said it is unacceptable for politicians to indulge in cover-up when their “mates” are accused of sexual assault, because “everyone here has a mate that has been sexually assaulted or raped”. 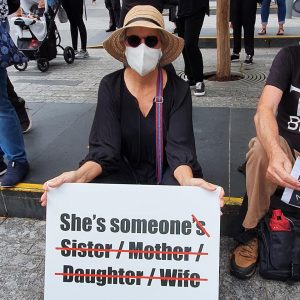 Jacqueline King, Assistant General Secretary of the Queensland Council of Trade Unions, stated that sexual harassment was prohibited by law not just in the workplace, but in any public space. She acknowledged that there were more than three generations of women in attendance and as I looked around I saw an elderly women seated on my right and a woman sitting on the ground breastfeeding her baby on my left, testimony to the universal experience of gendered violence.

As the rally wrapped up, and the crowd dispersed I saw a sign that read, “I can’t believe I still have to protest this shit!” and wondered whether this time there will be change.