50 Years of Activism in Brisbane – with Anne Richards 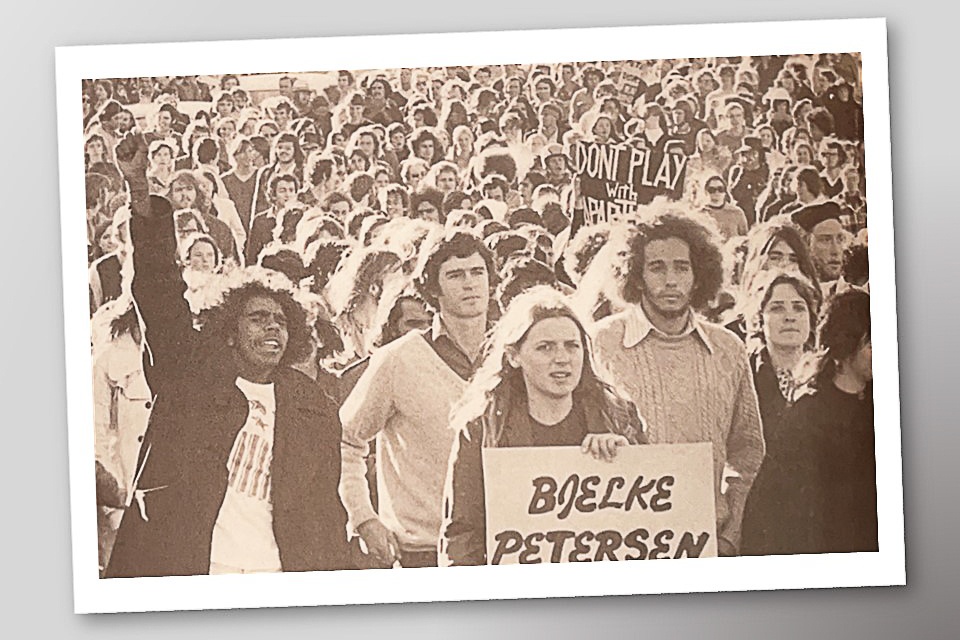 Being kicked out of home was only the start of a long and continuing journey as a self described radical socialist for Anne Richards.

Anne’s novel, ‘A Book of Doors’ is both a recounting of her life through university and beyond in the 60’s and 70’s as protests engulfed the city of Brisbane.

But it paints a broad picture of the evolving nature of activism and protests in Brisbane over the last 50 years.

Where once protestors were looked down upon for going against the status quo, they are now almost encouraged by their peers, friends, families and communities to speak up for causes they’re passionate about.

Anne’s experience was totally different – at first she began attending daily forums at the University of Queensland where she studied Arts.

“I didn’t ever speak, I just wanted to listen, I was there to learn. I wanted to know all the reasoning behind the different points of view… the level of debate was intoxicating,” Anne said.

“I was already radicalised before I went to uni because I grew up with all the mass protests and civil rights marches.”

“It was an incredibly active time, but it was also very engaging and hard to ignore on quite a small campus.”

The night before the May 1970 Vietnam Moratorium, Anne’s father kicked her out of the family home for her ‘radical’ views.

“My father was certainly convinced that I was a radical communist, and he couldn’t have me living under his roof,” Anne said. 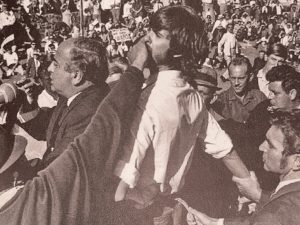 The protests at this time were often very violent, particularly in Queensland where police responses to marches ended in brawls and arrests, and the state Special Branch was constantly surveilling protesters.

Anne explains the violence had been, and still continues to be, influenced by police and government views of the issues.

“People that would go on a march because they felt strongly about an issue were beaten up or arrested, and they would say ‘but I’m not a radical, why are they doing this to me?’

“The violent reaction convinced people that things were not right,” Anne said.

“Something I’ve never understood is why the authorities are so afraid of actually having debates and actually allowing people to have a say.”

Premier at the time, Joh Bjelke-Petersen, had declared that all marches were illegal, and anyone could be arrested at any time, something that was not occurring in southern states.

And it’s something that is still present in Queensland today: in 2013 with Campbell Newman’s VLAD Laws and more recently with the Palaszczuk Government’s anti-protest laws.

“If it wasn’t so violent, if the police just let them have their say, you wouldn’t have radicalised a whole generation,” Anne said.

“It was the violent response from police and from the government that, in many ways, just kept the movement growing,” 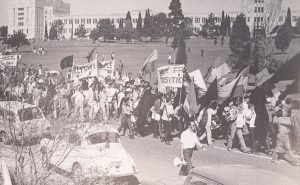 After she was kicked out of home, Anne moved into a share-house with more like minded peers and continued to attend rallies and marches in Brisbane until she moved to Nimbin.

“The conversation shifted. We were not achieving what we wanted through being bashed up in the streets, everyone was in battle fatigue,” she said.

Nimbin was a place where people from around the country could come together and share their views, develop networks and support each other.

And progress continued: the UQ organisation ‘Harpo’ was set up to resist powerful organisations, and the Aboriginal and Womens’ movements began to pick up in the early 70’s.

“The lawyers set up Aboriginal Legal aid, all these incredible programs came out of it.”

The protests we see in Queensland now are now far more peaceful, however, government responses remain strict and firm, often avoiding the conversations activists are trying to have.

And it seems the people of Brisbane are becoming more vocal about the issues they are passionate about.

Activism is not only now more accepted in Brisbane, with so many people involved, for some it is encouraged.

Back in 1970, 4,000 students and staff attended the Vietnam Moratorium, and in 2020, 30,000 Brisbanites attended a Black Lives Matter protest in the heart of the city.

Anne attended this recent protest with her daughter and granddaughter, and found the event entirely promising and vastly different to her previous experiences.

“30,000 people in the streets of Brisbane on a Saturday afternoon – wearing masks and taking the threat of COVID seriously but still being committed enough to go because it was such an important issue,” she said.

“And to have such a strong presence, kids, all age groups, and all colors and nations, and completely nonviolent.”

As well as this, today thousands of people are once again taking to the streets of Brisbane city in a peaceful march for the Brisbane Women’s March 4 Justice.

These conversations we’re having now are eerily similar to those Anne was speaking up for in her youth.

“I’ve posters from 1970 that were save the earth, save the planet, environmental pollution, teaching on women’s rights, let’s have creches on campus, inequality of wages,” she said.

“None of these issues have been resolved in a satisfactory way, we took some steps forward but it’s slowly being eaten away again.”

Anne said she hopes her book can reignite these conversations and encourage people to stand up for what they believe.

“We can have different ideas, and still have a civil conversation, we can have very opposing ideas, and still work together within the same workplace, and politicians for some reason seem to feel to get this sort of sense of power that they have to stop this,” she said.

“They have to stop this because it will disrupt the smooth running of society, and when you look at it, society is not actually running that smoothly at the moment, so at some stage, you kind of have to engage with some of these debates, again.”

“The idea of having a completely compliant population is reasonably toxic.” 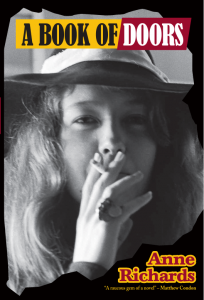 Book of Door was published in October 2020 by AndAlso Books.

You can see Ann Richards talk about her book on this video of her presentation at Avid Reader Bookshop recorded in January 2021.