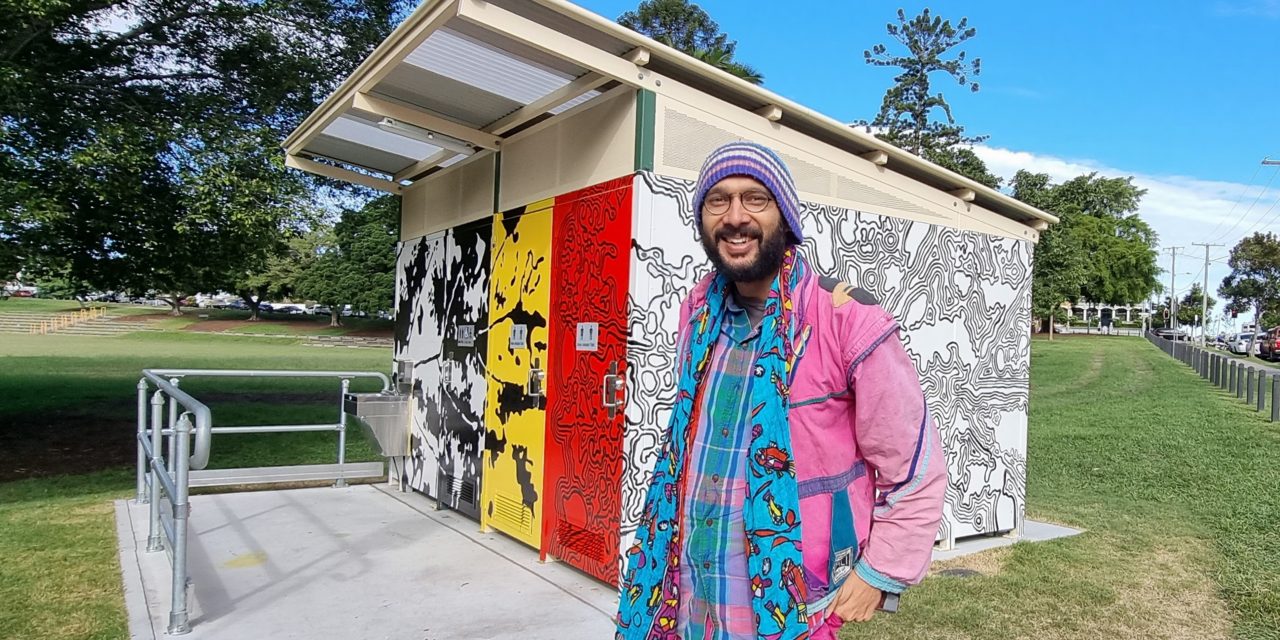 In a wide-ranging conversation, Councillor Jonathan Sri provided updates on new infrastructure in Musgrave and Davies Parks. He also reflected on how the recent Federal election may play out at a local government level and his own future in local politics..

Brisbane-based illustrator, artist and designer Gert Geyer painted the older block near Cordelia Street with a mural featuring coral, the water rat, and a river motif.

Dylan Bolger painted the newer block close to Russell Street with a mural featuring the Aboriginal flag colours with the underlying motif of the Macaranga leaf.

“The Macaranga is of old-world genesis and is considered a re-coloniser or pioneer plant; meaning after devastation it will be one of the first plants to grow back and breathe new life into the space. The leaf is representing my people and culture being of ‘old world genesis’ as we grow back through the devastation of colonialism,” Dylan Bolger told Cr Sri.

Cr Sri said Mr Bolger also partnered with some of the kids from the Murri school at Acacia Ridge, and they’ve been helping him with the artwork.

“It’s really cool to see a bit newer public art in the park because it’s been a long time since we’ve been able to get any murals supported,” Cr Sri said.

Cr Sri said that a combination of factors, including high materials costs and construction labour costs, means that it is hard to get a lot of value for money on infrastructure spending.

“We put about $15,000 towards these two murals, so the artists have gotten paid quite fairly for their work and have been compensated for the time they spent consulting with elders as well. We are resourcing to do the job properly, which I think is really important.”

The significance of First Nations art in Musgrave Park

Cr Sri said Musgrave Park is an important place for Aboriginal people, not just from the local area but from across Australia.

“It’s been a well-known hub of community organising and networking and political resistance for a long time, so making that Aboriginal presence visible in the park is, I think, particularly important.”

“At a time of rapid gentrification, there’s probably a lot of newer residents moving into the area who aren’t aware of that history and status, so I think the more visual markers embedded in the landscape, the better. It’s also important to acknowledge that having a few murals or a few historical plaques recognising Aboriginal people doesn’t make up for the fact that Aboriginal people have been displaced through rising housing costs and we also need to continue to push for more Aboriginal Housing in the inner city.”

Update on the proposed public toilet in Highgate Hill Park

“Based on the various forms of consultation we’ve done; my very strong sense is that that’s a minority view. The vast majority of residents I’ve spoken to and heard from really want a loo in that area.”

“I’ve talked to people who live on Hampstead Road and Dornoch Terrace, and literally next door to the park, who think the toilet is a really good idea.”

The Gabba Ward office has allocated money to get a concept design produced and they are waiting on Council to respond.

“Then we’ll have a clearer idea of exactly how it’s going to look on the site before we allocate the full money to deliver it.”

Usually, portaloos are used for community events held in Highgate Hill Park, but Cr Sri says locating them appropriately can be an issue.

“The last time, we had to put them down the bottom of the hill, which meant they weren’t accessible for people with impaired mobility. So, they are not a suitable alternative to a permanent loo.

Cr Sri said a permanent toilet block would primarily meet the needs of incidental users, such as families who come for picnics.

“If you’ve got kids and you’re trying to have a little picnic on the hill in the park, pretty soon someone needs to go to the bathroom and that becomes a bit of a stress. So, it’s really about accessibility – that’s how I look at public toilets.”

Cr Sri is supporting a local Moonrise concert in the park organised by residents on Saturday 11 June.

“The theme is around supporting renters’ rights and highlighting concerns about people being evicted into homelessness.”

“The gig will be specifically framed as, women out front, so all the artists are women and non-binary people. There’s still a concern, I think a very valid concern, in the local music scene that for all our talk of gender equality, men are still over-represented on a lot of stages in the area. And so, I think it’s important that we put the money in the effort towards platforming women and non-binary artists as well.”

Another Gabba Ward initiative and one worth visiting is the new nature playground in Davies Park. Cr Sri said the park had received overwhelmingly positive feedback.

“There are probably a lot more parents who have felt something wasn’t quite right about the way playground infrastructure is normally delivered in Brisbane. And interestingly it’ll probably be a lot cheaper to maintain in the long term as well.”

Music play at the Lizard

Cr Sri also mused about the possibility of activating the small public space behind the lizard statue on the corner of Boundary and Russell Streets. He proposed Council could fund a redesign of the space to make it more usable and to improve connectivity across the road to People’s Park.

“The difficulty is that the Council is pretty inflexible about how they deliver projects in these areas. Either they conceptualise it as a really big suburban renewal project where a lot of money is spent on design and project planning and multiple tiers of middle management, and the costs quickly run into the hundreds of thousands of dollars, or they’ll just put in a public bench.”

“We just want to spend a bit of money for some creative improvements. It’s annoying that the Council doesn’t have good mechanisms to work with local designers like John Mongard to pick up on community ideas more directly.”

Cr Sri thinks outdoor xylophones in the space would add a ‘play element’ and will be doing some consultation on the idea.

The Greens surge in the inner city.

Cr Sri said the Greens’ results in Griffith, Brisbane and Ryan bodes well for the Greens coming into the 2024 council elections.

“The seats of Walter Taylor, Paddington, Brisbane Central and Coorparoo are now looking extremely strong for us. You could almost say they’re ours for the taking if we can build a strong campaign and select the right candidates. “

“But there’s another layer of seats such as The Gap, Pullenvale, Holland Park, and Northgate or Enogerra that are also now winnable, because those seats will have federal Greens representatives and we’ve seen some big swings in those suburban booths now.”

Cr Sri thinks we could see a change of administration at the next Council Election.

As to his future and whether he’d put himself forward as a Mayoral candidate, Cr Sri said he is still trying to work that out.

“I did not set out to be a career politician. And I think I would prefer to go back to being a musician and a writer. I got into Council politics out of a sense of necessity and frustration with the direction that the city was headed – I’d prefer not to have to do this stuff for the rest of my life. But I guess we’ll see once we’ve got a better sense of what the lay of the land is.”

Image of Dylan Bolger, a video still from Jonathan Sri, all other images, Jan Bowman