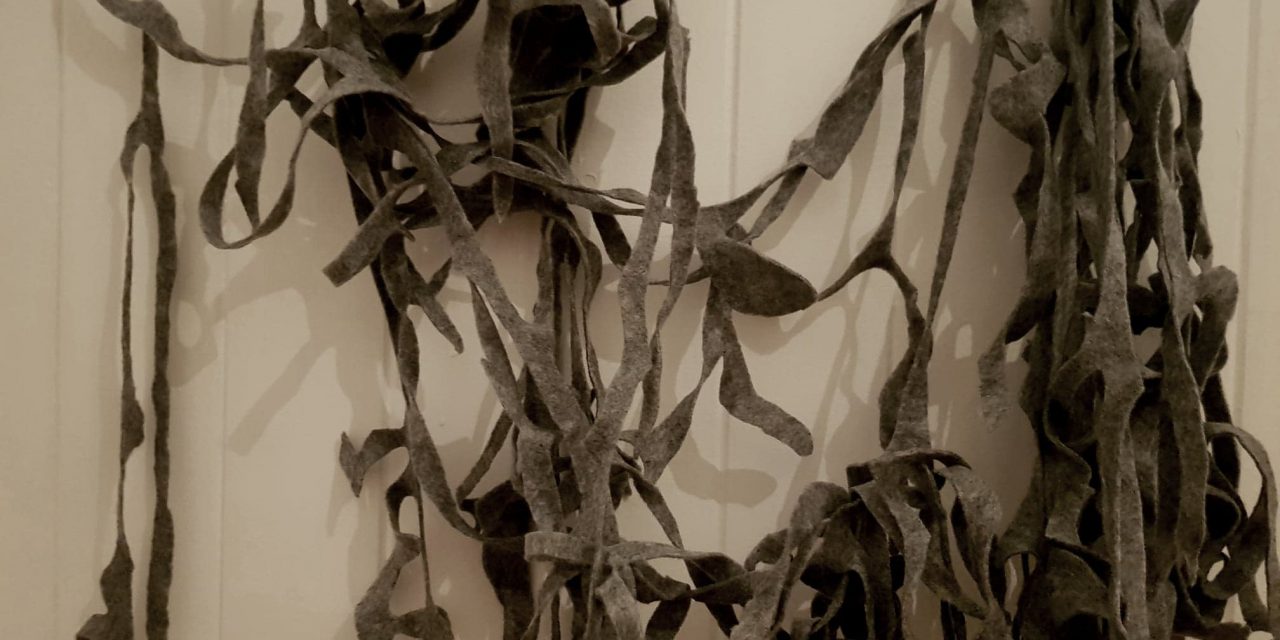 Working with Kay Lawrence on the production of Tipping Point hosted at House Conspiracy has been a great pleasure. Her art is thought-provoking and forward in the ways that it calls attention to climate emergency, but it is also simultaneously delicate and coy in its use of calico, stitching techniques, and the verticality of threads gently pouring onto the floor. None of Lawrence’s pieces  shy away from conveying her opinion: we have reached the tipping point and we must act.

When thinking about the best way to exhibit Lawrence’s work, I thought that the theme that she proposed would have shined best in the form of a dialogue. So, I designed a dialogic exhibition. We invited artists to respond to Lawrence’s theme of climate emergency, or, to one piece in particular. As a result, the exhibition featured paintings by Rachel Apelt, collected in a series titled “Planet,” a butoh performance by Saara Roppola titled “Carbon,” three songs played by Morgan Eylese, and a poem written and read by Dusan Bojic.

Some of Lawrence’s own works exhibited at Tipping Point tackle the issue of climate emergency head-on and make direct and compelling political commentaries. We collected these artworks in one room. One is a large calico with a depiction of Scott Morrison holding a piece of coal in his hand. His body is only sketched. His face and the piece of coal are more realistic and detailed, printed and transferred onto the calico. The title of this piece is “The PM’s New Clothes.” Morrison is represented naked. This piece is inspired by Hans Christian Andersen’s fairy tale the Emperor’s New Clothes the story of an Emperor who cared only for himself and nothing for his people.

One day, two swindlers arrive in town and let everybody know that they were weavers. The Emperor decides to employ them to tailor a cloak for him and they offered to do the work with the most magnificent fabric which is invisible to anyone who is unfit for their office or is unusually stupid. The Emperor thought that this was a great way to discover which men under his service were unfit for their posts, and to tell the wise men apart from the fools. While the weavers cashed in, and pretended to weave the most magnificent cloak, the whole town came to know about the cloth’s peculiar power. Neither the Emperor himself nor his officials dared to say that they could not see the cloak for fear of being accused of being fools or unfit for office. So, naked, the Emperor went in procession to show his people his new robe. At first, nobody in town would admit that the Emperor was naked, until a child screamed “Look at the King, look at the King, he is as naked as the day that he was born”. At that point, everyone cried out that the Emperor was naked. But he continued walking nonetheless and more proudly than ever to maintain the appearance of dignity.

In the same room as “The PM’s New Clothes,” there are also two other cloths with delicate stitching and dangling threads. A closer look reveals the sentences “The Lucky Country” in reference to Donald Horne’s book published in the 1960s, and “How Good is Australia,” a rhetorical question defining of Morrison’s vernacular. Close to “How Good is Australia,” the skulls of two kangaroos finally provide an answer to Morrison’s question.

This room reverberates with a sense of tragic humour. The large figure of a naked Morrison grabs attention, which is then diffused onto the empty signifier of two sentences that mask the true condition of Australia’s climate emergency. This room contains the echo of the child screaming that the Emperor is naked and the hope that it gives courage to its visitors to echo that truth.

The remaining works exhibited by Lawrence make less explicit reference to Australian politics and have a more poetic tone. My favourite is undoubtedly “Ripple Effect.” This represents pathetic attempts to contain a multiplying mess. It is conveyed by 14.5 km of braided fishing line spilling over an old pirate-esque wooden box. Lawrence said that, initially, the box could contain the fishing line, which was only 1 km long. But she has been adding to it, crocheting in all three dimensions. The fishing line inevitably transports the viewer to the ocean and invites reflections about fishing practices and the threats to life under the sea. “Ripple Effect” is also a powerful metaphor of our state of existence under capitalist conditions. We keep on producing and consuming, and the effects of this unfettered consumption are now uncontainable.

Another installation that communicates through poetry is “Tipping Point,” a frayed green cloth hanging from the wall.  It conveys a sense of exhaustion and its colour brings the mind to the ocean, an element that is close to Lawrence’s heart. Standing in front of “Tipping Point” gave me a feeling of melancholy. I felt powerless before that cloth that was falling apart, after being cut over and over again. But here is where the power of art lays: the encounter with art creates an aesthetic experience, or the time-space to feel your feelings and examine what they mean to you. My feelings of melancholia and powerlessness were not the end of my encounter with “Tipping Point.” They were the beginning of an exploration about my role in exhausting the ocean and the planet. They prompted personal reflection about the disconnected points between me and nature, and where I can connect again.

The idea of reconnecting human and nature was further suggested by the artworks surrounding “Tipping Point.” These were Lawrence’s “It’s a matter of …#2” and “Homage to Kazuo Ohno #2,” and Rachel Apelt’s “Planet” series which represent human figures merging with nature and creating nymph-like creatures.

Rachel Apelt has been working on the topic of climate emergency for a while. Her latest exhibition Between Worlds at Caboolture Regional Art Gallery explores grief and hope in the current age of the Anthropocene. As part of Tipping Point at House Conspiracy, Apelt responded to Lawrence’s “It’s a matter of …#2” which features a woman with tree roots. For Lawrence, as for Apelt, reconnecting with nature involves overcoming the dualism that has been established between human and nature. Both artists speak of how Western thinking has ‘othered’ Nature, treating Humans as if they were external to Nature, and Nature as something to be exploited for Human development. Apelt and Lawrence connected around the idea that Humans are Nature, and both communicate this by representing Nature with Human qualities in the case of Lawrence, and Humans transforming into Nature in the case of Apelt.

And while Apelt’s art reverberated hope for a different future, the poem by Dusan Bojic helped us explore those feelings of hopelessness. The poem portrayed a tragic picture of a future that can possibly be imminent. While I can sympathise with this state of being, I also wonder what happens if we dwell in these hopeless spaces and indulge in desolation. Apelt’s intervention during the panel discussion was enlightening in this respect. She surveyed climate activists to understand how they respond to the daily flood of hopeless news about how we are killing the planet. She found that the response of climate activists is to spend time in nature and reconnect with trees, animals, and the ocean, which our culture persuades us to see as something other than us.

Saara Roppola’s butoh performance titled “Carbon” also intervened in the discussion about the relationship between Human and Nature. “Carbon” represented the carbon cycle. Carbon is paradoxically both a building block of life and a pollutant, it sustains life and destroys it. Rappola started the performance crouched down on a pile of dirt while covered with a golden cloak. In butoh style, shaking, she rose up then, covered by her golden cloak , she went down again trembling and convulsing as if chocking. The performance ended with Roppola covering herself in dirt, going back where she came from. “Carbon” mobilised the emotions of shock and horror, heightened also by the recorded sound of Roppola’s heavy breathing that accompanied the performance. This powerful butoh dance left me with a sense of unease which resonated with Roppola’s words that we need to rethink the concept of humanity if we want to survive the current climate crisis. She invoked the concept of post-humanism, that is, of a humanity that has transcended itself as a disconnected entity in the world. Roppola’s idea of post-humanism involves embodying the unity and continuity between Nature, Humans, and Culture. For me, Carbon highlighted that when we hurt or exploit nature, we also damage humanity. After all, we are all just made of carbon.

Morgan Eylese’s music spoke about change too. His lyrics stroked the chord about the need to chance oneself before we can change the world. His melodies added a layer of honesty to the exhibition. They kept the tone of the exhibition down to earth by speaking in everyday language that is relatable and easy to listen to.

Overall, Tipping Point invited an exploration of the emotional states that characterise the Anthropocene. Lawrence mobilised anger and distrust towards politicians, and sadness for the things that might soon no longer be. Apelt expressed hope set against the hopelessness of Bojic. Roppola evoked shock and dismay that can be needed for us to think differently. Eylese summoned yearning and striving for individual change. All of these emotions are now sitting with me waiting to be unpacked and acted upon.