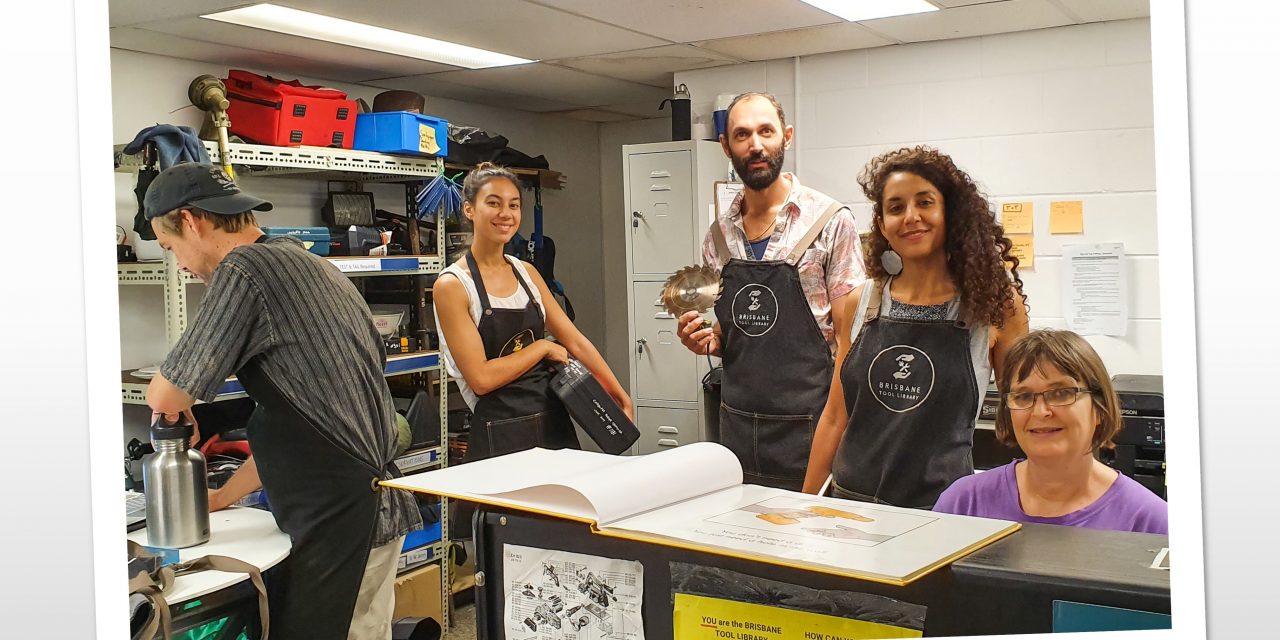 We seem to hear a lot about the circular economy these days. But what does it actually mean? How does it work?

Sabrina Chakori, founder of the Brisbane tool Library, reckons it’s a perfect example of a circular economy at work.

We talked this week in the lead up to her Circular Economy workshop on Saturday the 7th of March.

The tool library, Sabrina says, is her response to the social and environmental crisis that we’re experiencing globally.

“I was born in 1992, which was the year of the first Climate Summit. So, I think I am already the generation that inherited a sick planet,” Sabrina told me.

A PhD student at the University of Queensland, Sabrina’s research explores zero packaging food systems and how these models could lead to social, environmental and economic benefits within a degrowth economy.

She said that her research has led her to appreciate that to be socially and environmentally sustainable, we need to start with community. And so, she decided to start with the practical application of sharing resources.

“I really believe that one negative aspect of our economy today is that we are over consuming natural resources,” Sabrina said.

Why the State Library?

Sabrina set up the tool library in West End in 2017, but high rents forced her to look elsewhere for a suitable space.

The State Library seems an obvious choice for a Tool Library, but it is actually the first of its kind located in a public library anywhere in Australia.

“… being in a public library was really important because we hear a lot about the circular economy, and the sharing economy concept. And I think that spaces like Public Libraries should reclaim back those terms,” Sabrina said.

“Libraries have been the most successful business model over centuries and over countries… So, I think sharing resources makes sense. And if these projects are supported by the community, by Council and by Government, well, it would be a win-win for everyone”.

How does it work?

All the goods on loan at the Library are either donated or sourced from landfill, they are then repaired and entered into the library inventory.

The library has the expected power-tools, garden equipment and camping gear, and kitchen appliances, but more unusually, it has a pizza oven which can be borrowed for parties, a popcorn-maker, and Christmas decorations and a tree.

Annual membership is $75 per year, or $60 for concession holders. Members can check-out up four items for up to two weeks.

The library also runs skills workshops for those who are a bit uncertain about using the power tools and other equipment.

The Library is one hundred percent volunteer run, including Sabrina herself. They have around 60 volunteers of 15 different nationalities.

Sabrina attributes the success of the volunteer program to keeping the space co-owned and valuing everyone.

Callum, one of the volunteers I met at the Library said,

“it makes me feel good, doing something that I enjoy and I’m passionate about.”

“…it speaks to the heart of things that are very important to me, like recycling, reducing waste and reusing and fixing what you can, and that’s all part of what’s done here.”

The library paves the way for Brisbane citizens to reduce our ecological footprint, to save money, and to save space at home, but Sabrina thinks the library could also be a step towards a new economic system.

“I think that we are a small piece of the puzzle. But we really believe that we need to build a new economy that is socially and environmentally sustainable. There’s this growing movement called the post-growth economy. So, at the moment, our economy is based on infinite economic growth, and this is just measured with GDP, we think that we should actually measure how much free time we have, and the well-being of people”.

On Saturday the 7th of March, Junior Chamber International (JCI) is running an event at the Tool Library, where you can meet Sabrina and discuss the concept of Circular Economy.

To participate, you can get your FREE ticket at http://events.humanitix.com.au/circular-economy-with-sabrina

Sabrina Chakori is a finalist in the QCF 2020 Philanthropist of the Year to be announced in June.

Listen to my interview with Sabrina here: