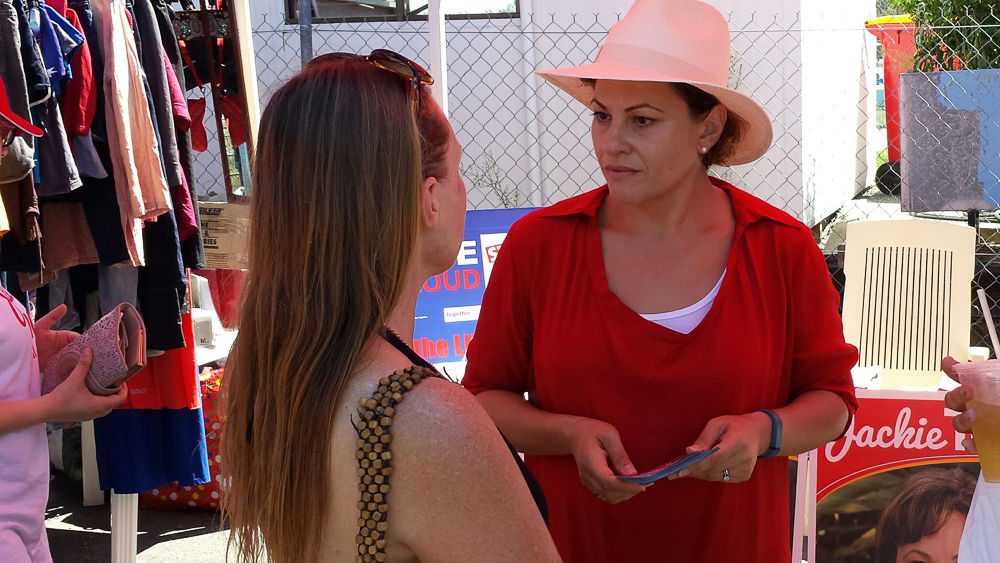 Jackie Trad was elected as the Member for South Brisbane at the 28 April 2012 by-election, following the resignation of long standing member and former Premier, Anna Bligh.

In her maiden term, Ms. Trad has been Shadow Minister across multiple portfolios including Transport and Main Roads, Environment and Heritage Protection, Small Business, Consumer Affairs and The Arts.

Ms. Trad was born in East Brisbane where her parents ran a small business. She told the Westender that it was not until she reached University (where she did an Arts Degree and completed a Master of Public Policy) that she was motivated to political action. She says she was attracted to Labor because of its response to social justice issues in particular.

“… I believe it’s the big bold decisions the Australian Labor Party has made in the past that have made a big difference to the way people live and the life choices and opportunities Australians have”, she said.

Her early working life started in her parent’s small business, and she worked in hospitality for many years to support herself as a student. She worked in State government in New South Wales and Queensland, before working for Ms Bligh.

Ms. Trad lives in the South Brisbane electorate and says her passion for her community propels her to make sure it has a strong voice in Parliament.

She says it is up to individual candidates to justify their connection with the community from which they are seeking support.

“Unless you’ve got that sort of connection with the community you have to question whether you’re going to be as passionate an advocate as you can be”, adding, “I shop in my community, I go to the doctor in my community, and the kids go to school in this community. I have a very strong connection with the suburbs and places of South Brisbane and I love it very much, and I feel very honoured and privileged to be able to represent this community both in Parliament and outside it.”

What are the voters of South Brisbane saying?

Ms. Trad said that significant issues being raised with her in the electorate include ‘unsustainable” development, the Barrier Reef, and funding changes to the Community Services sector.

“People are incredibly concerned about the Government’s and the Council’s plan for the Kurilpa precinct,” she said.

She said there have been widespread objections to the concept design for the Kurilpa Master Plan, which she says is essentially a high-rise suburb on the banks of the Brisbane River at West End.

Ms. Trad said that by the Government’s own reckoning this is a plan for the next 15 years and so does not require urgent action, “but they only gave the community 30 business days to provide feedback”, she said.

Ms Trad says that people are concerned about the future of the reef and Government decisions such as the port expansion of Abbot Point. Ms Trad said Labor has pledged to legislate to prohibit dredge spoil being dumped on the Great Barrier Reef.

People are also raising concerns about frontline services in the community sector Ms Trad said. She thinks the Government plans to amalgamate funding and reduce the number of community-based organisations, “… poses a significant threat to the community sector; to the quality of services provided by very local, unique community services.”

Given the exposure of corruption surrounding political donations by the NSW Independent Commission against Corruption (ICAC), The Westender asked Ms. Trad whether Labor will continue to accept donations from developers.

Ms. Trad said that it’s easy to fixate on just one stream of donations from one sector or one industry.

“What we actually need is transparent electoral disclosure rules right across the spectrum. The LNP has changed the electoral donation laws to make it easy to hide political donations. The disclosure threshold went from $1000 which it was under Labor, to $12,800.”

Ms. Trad said that Labor’s position is that the threshold for disclosing all donations “should be lowered from $12,800 to $1,000 – as it was under the previous Labor Government.”

On a personal note, she added, “I have taken the personal decision to not accept any donations from developers. Development is an incredibly contentious issue in South Brisbane and as the local Member, I play an important role in listening and acting on behalf of the community”.

“I’m very proud that my campaign is built on the back of small, regular donations from local Labor party members and supporters in the community”.

Ms. Trad said Labor also wants to give independences back to the Queensland Crime and Misconduct Commission (CMC).

“I think that what Campbell Newman has done to change the laws around political donations has been a corrupting influence on democracy,” she said.

Labor has argued throughout the election campaign that Federal issues are a feature of this election and it has taunted Campbell Newman about the decision not to invite Tony Abbott to campaign here. Mr. Newman has responded that voters are focused on state issues. Ms. Trad disagrees.

She says that the Abbott government’s “unfair budget” is having a big impact on Queenslanders.

Ms. Trad said that the university students who are at the beginning of their university life may be finding themselves in debt of up to $100,000 for a degree.

In spite of the Government decision this week not to pursue the reduction to GP rebates under Medicare, Ms Trad said “People are very worried that this is just a short-term measure to help Campbell Newman, not a long-term commitment to help Queenslanders. People just do not trust Tony Abbott with Medicare.”

Ms. Trad warned against “getting carried away with the polls”.

“It is incredibly interesting for political commentators to keep an eye on the polls but … Election Day is one big exercise in democracy and sometimes polls get it right and sometimes they don’t”, she said.

For Labor to win she said, it needs to pick up another 36 seats, and “that is a very very tall ask” for a party starting with a nine seat base, she said.

In terms of South Brisbane, she said that the experience of the last election indicates that there is no such thing as a safe seat.

“You have to fight every day to win and retain the confidence of the people you represent”, she said.

Ms. Trad said she will talk to as many people as possible between now and the election to make sure that they can exercise their vote. She said is important that people understand the recent changes to electoral laws and that they bring their ID with them to the polling booth.