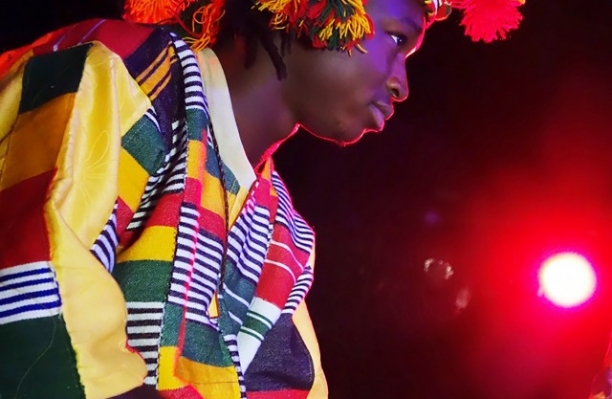 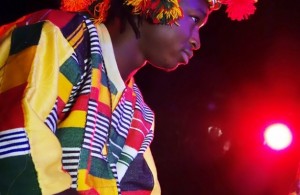 Bassid Kone is themasterful centre of this dynamic musical experience

The theatre space at Queensland Multicultural Centre, BEMAC, took off last night as the Kone Express left the station with two thirds of the audience on the dance floor, glowing and grinning in sheer delight at the exuberance of the performance.

Bassidi Kone is a young man from Mali, who travels the world but manages to maintain an Australian outfit that play as the Kone Express whenever he is in town. Right now they are touring the country to take this infectious musical hybrid into the regions in a combination of workshops and performances.

Kone Express is a fusion of Western and African music with a beautiful tension between the structured rhythm of a drums, bass, guitar, keyboards and horns combo and the jembe, Balaphon and variety of drums from the three Africans on stage.

The fusion goes all the way through the performance. The trombone player, Tom Williams, doubles as an MC introducing the key players while the lead singer, Shabba Ashun, takes on the role of inspiring the audience to dance clap and generally engage with the music on as many levels as possible. Some of his dance moves have to be seen to be believed, and his ability to single-handedly fill in a quiet spot in the proceedings is second to none.

This double handed approach is especially evident in the percussion and melody.

At its best, the square cornered room laid down by the whitefella music was stretched, complemented and transformed by the melodies and percussions of Bassidi Kone and his compatriots. In these moments the audience was uplifted and transported onto an agile cloud of music. At times the two threads almost seemed to wander into a different space only to be brought back into alignment for a chorus or a big finish.

This reviewer was thoroughly engaged on the dance floor, using the framework beat to guide the legs while the more freeform rhythms of the drums and the melodies of Kone’s Balaphon (an enormous marimba) gave expression to the arms and head.

That’s how I like to think it looked anyway.

Don’t rely on the fact that I had a great time and feel good about, check out Kone Express on YouTube  and form your own opinion. Even better, watch out for the dates in June and July and get yourself along for a night on the tiles. Just make sure you have your dancing shoes on and are really ready to bust your best moves. You will get plenty of opportunity.