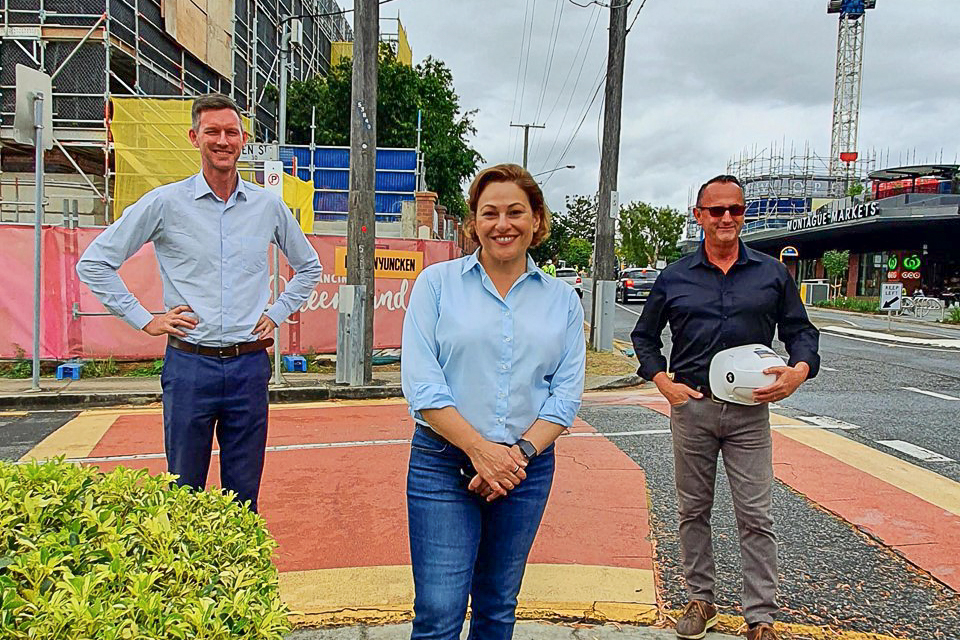 Local member for South Brisbane, Jackie Trad, and Minister for Transport and Main Roads, Mark Bailey, announced today a commitment to put $1 million on the table to fund a masterplan for the Montague Road corridor. They are seeking a 50/50 partnership with Brisbane City Council.

Asked how this commitment will translate into much needed practical action for the community, Minister Baily said:

“We’re seeing a failure by the current Council to actually get things done. And so, I support Jackie and the Government’s positive move to get real funding in place so that we can get this work done along the Montague Road corridor. The amount of growth through the old industrial area has been absolutely mammoth in the last five or six years, and this work needs to be done as soon as possible and this is real money to get that work done.”

Ms Trad said that Minister Bailey met with community group, Kurilpa Futures some months ago and the clear message from the group was that while there had been a State funded transport and mobility study, what hasn’t been done is a thorough corridor study that looks at traffic, and at pedestrian and cyclist movements throughout the peninsula, and the impacts they have on the local small streets.

“There’s no doubt that the community is really feeling the pressure from population growth and change of use for the land along Montague Road over the past decade and a half. It’s gone from being industrial low residential to high density with lots of business activity.”

“Council has failed in terms of doing the proper planning around how we change as a suburb, how we change as a peninsula, and how we have the right infrastructure to absorb that growth, and to make sure that we can protect our liveability. That’s what the corridor studies are about. It’s about a foundation for improvements along Montague Road that guarantees better traffic flows, safer cycling, and that guarantees that pedestrians, and particularly children walking to school, have as safe a journey as possible,” Ms Trad said.

Minister Bailey said that he would be speaking to Council today about the Government’s commitment.

“This is an important announcement, and we want them to partner with us…I think our relationship is probably the most positive it’s been for a long time, and I think the fact that we’re putting cold hard cash on the table helps to come to agreements.”

Ms Trad wrote to the Lord Mayor, Adrian Schrinner today, seeking his support for the proposed study which she said could lead to investment in a new ferry terminal at Victoria Street, additional greenspace on Montague Road, more safe pedestrian crossings, a reduction in the speed limit to 40 km/h, and boulevarding of key streets.

Lucas Gilroy, Head of Experience and Place at Queensland Ballet, welcomed this morning’s announcement. He said that  during the building works for the new theatre at the Thomas Dixon Centre, Queensland Ballet has met with community groups and with Ms Trad to discuss concerns about traffic management along Montague Road.

“We found that the individual traffic management plans for all the developments down this road are not stitched together in an overarching masterplan. So, this couldn’t come soon enough, and we are really excited about the announcement.”

Mr Gilroy said he would also like to see a commitment from Council to a new CityCat terminal in West End. He observed that with the new Ballet Theatre at the Thomas Dixon Centre, and Queensland Theatre at the city end of Montague Road, the area is becoming an arts hub that should be supported with an efficient public transport network.

Community group, Kurilpa Futures, has been calling for a comprehensive plan for Montague Road and the corridor of roads between Montague Road and Gladstone Road. The group has been holding pop-up meetings in the Hill End area seeking support for a petition that calls on Brisbane City Council to implement a Local Area Traffic Management Plan for local streets.

“Kurilpa Futures welcomes a commitment to fund corridor planning in conjunction with Brisbane City Council. Because of the growing volumes of traffic along the corridor what we really want to see is commitment to resident engagement and practical action,” Kurilpa Futures spokesperson Pam Bourke said.

The press-release for this story was provided by Ms Trad’s office. The Westender is open to receiving press-releases on this or other issues relevant to the local electorate from all South Brisbane candidates.