The Art of Hibernation: The Gabba Ward shutdown album 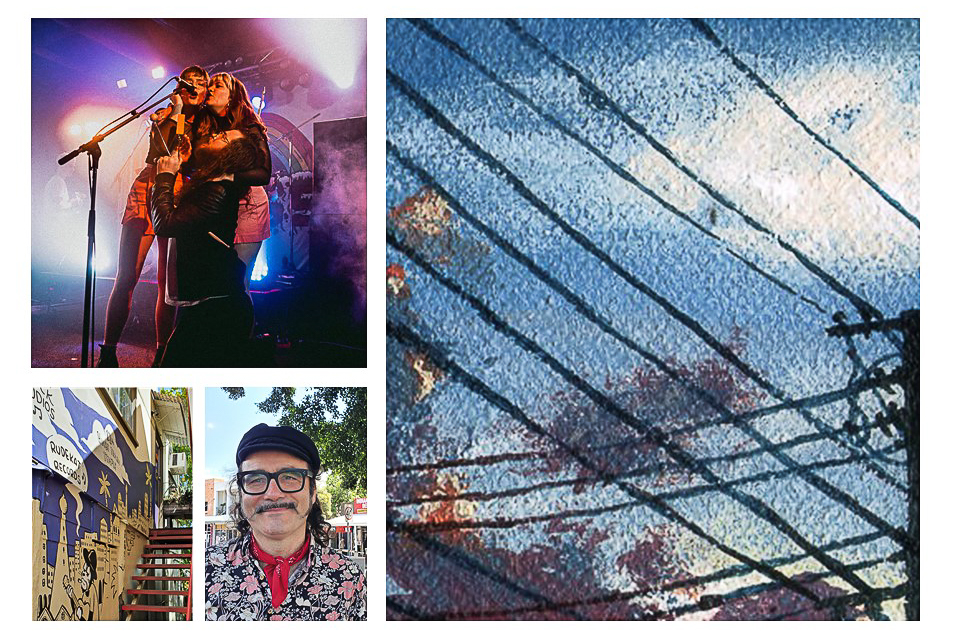 If you haven’t heard it yet you are missing a real treat. The album is a wonderful musical celebration of our local musicians and community. Given it is about the COVID experience, you might been expecting something serious and reflective, but it is surprisingly full of humour.

“The final product is a gloriously diverse compilation album of both experienced and up-and-coming musicians who have strong connections to the suburbs of Dutton Park, Kangaroo Point, Woolloongabba, South Brisbane, Highgate Hill and West End,” Cr Sri said on Facebook.

I spoke with Ella and Meg from Bad Sext and Carles Gutierrez Sanfeliu in July, before they recorded the album, and it was a pleasure to get back to them and get their take on the experience and the final product.

Each of them said that one of the real pleasures of recording the album was getting to hear and learn about other local artists.

“It’s good to see that there’re all sorts of different genres and that there wasn’t a specific kind of theme or genre that they were sticking to,” Ella said.

Ella and Meg reckon Badsext is hard to classify and that they stick out on the album like the proverbial sore thumb.

“The great thing with the album is that there is such a huge variety – you’ve got these really beautiful folk, soul, jazz tracks and even indie – and then you’ve got us! “

Their song, “Spun out”, is about “waiting for things to happen”.

“We took this concept and came up with relatable scenarios that people anxiously wait for: their period after a broken-condom-scare, true love, or perhaps the results of a very important sexual health check-up.”

Because each artist recorded their songs separately, they still haven’t met many of the other musicians yet, but they are looking forward to getting together for drinks soon.

Jonathan Sri reckons Sanfeliu’s song is, “perhaps one of the quirkiest tracks on the album.”

Carles calls himself an electroacoustic troubadour.

“A song is a travelling device, and a picture of the world through someone’s eyes and heart: I aim to write and perform songs that convey better pictures for a better world, so we can all go to places where we belong.”

Calling his piece, “Animal Revenge Cartoon”, Carles said he wanted to keep the message simple to allow the listener to overlay their own experience or their own story onto the song.

“It was fascinating to see those tensions and those insecurities, that had always been in social life, come to the surface and put everyone in a hotspot and give everyone a certain degree of anxiety. But it also provided a certain degree of choice, or of getting our priorities right. And I thought that that was a very healthy thing for everyone.”

Another highlight for the artists was the collaboration with Chaos Magick Studios in the recording of songs for “The Art of Hibernation”.

“They made it super easy for us. We just went in for the whole day, until 10 o’clock at night. The dudes were really lovely and fun to hang out with,” Meg said.

“We’re stoked. It sounds really good. The quality is great.”

As to the experience and product, Meg and Emma said,

“It’s the best thing ever. And so, if we get a couple more followers from the album, then that’s a bonus.”

Carles, who hails from Spain said he has had feedback from other musicians from West End and Brisbane, and also from family and friends living in North and Latin America and Spain.

“They like the fact that there is space for these initiatives, and that they’re not driven by profit or by a particular scene, and are not success-driven.”

Carles says things were changing for artists before COVID.

And while he is happy to be paid, he says the important thing is that there are different ways to get rewards.

“The important thing is being aware that the arts have immense value in contributing to the cohesiveness of communities and contributing to general wellbeing, to mental health and happiness.”

“The emphasis should be on supporting the environments that help the arts and the artists.”

Meg and Ella said that things are ‘slowly but surely’ getting better on the music scene.

“We have a show coming up later on 24 October at Bunyapa Park that Jet Black Cat is organising: a free park show which will be really great. We’re not getting paid for it, but it’s a nice thing to do.”

Carles said he is now working on his debut album, a collection of eight original songs in electro-acoustica format that integrates vocals, piano, sampled sounds, and synthesis [Carles plays all the instruments] and redefine the traditional figure of the troubadour in a post-digital context.

“I am also working on the intersection of literature and music, writing a series of music-led stage plays that re-interpret historical figures from a queer perspective,” Carles said.

Where to get it

You can purchase the album on Bandcamp for $20, or you can nominate your price above that.

“50% of the sales profits go directly back to the artists featured on the album. The other 50% also goes back into our local scene. We’re setting the money aside to pay musicians to perform at a series of community gigs once the shutdown restrictions ease.” Cr Sri said.

Cr Sri thanked those who helped choose the featured artists and Burgkaba for the album cover artwork.

“I want to give a massive shout-out of gratitude to the crew from Chaos Magick Studios at the Tanuki Lounge on  for coordinating all the recording, mixing and mastering, and also to Daniel Fournier for his help behind the scenes,” Cr Sri said.